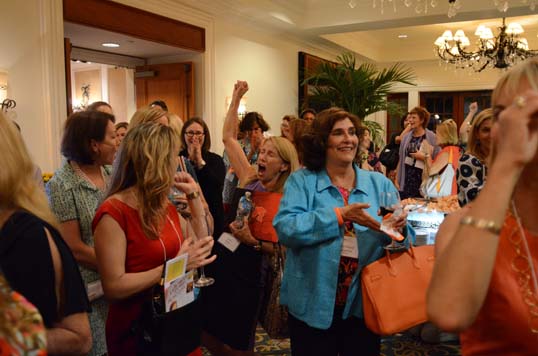 Impact 100 members, including Laura Stoltz (raised fist), react as the winners of the $100,000 grants are announced at the Delray Beach Marriott. Photos by Jerry Lower/The Coastal Star

Impact 100 members neither waste time nor money, but with their signature flair and a fair share of fanfare, they awarded $200,000 on April 18 to area nonprofits Women of Tomorrow and Equine-Assisted Therapies of South Florida.
Through Women of Tomorrow’s mentor and scholarship program, professional women are paired with small groups of at-risk public high-school girls to teach them personal and professional skills necessary for life success, reaching goals and increasing self-esteem. Jennifer Valoppi  from Women of Tomorrow promised to expand her group’s mentoring programs reach to 10 high schools in southern Palm Beach County with the grant.

Founded in Miami by Jennifer Valoppi in 1997, Women of Tomorrow now operates in 43 Florida and 13 metro Detroit cities, serving more than 2,500 at-risk young women annually in 130 public high schools with its network of more than 350 professionals. Valoppi said the Impact 100 funding will allow her organization to have a south Palm Beach County office, hire an area person, double its mentors here and increase its services to an additional 75 young women in south Palm Beach County. 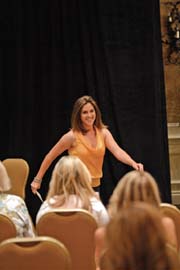 Equine-Assisted Therapies of South Florida, founded 30 years ago and based in Coconut Creek, offers people with special needs recreational therapy with horses. It serves 130 children and adults annually.
Molly Murphy, the organization’s outreach manager and presenter on April 18, used herself as an example. Diagnosed with cerebral palsy, she became a student in the program when she was 9 years old.
Thanks to the therapeutic exercise afforded through horseback riding that stretched out her muscles, she avoided a series of surgeries.
The Impact 100 funding will allow Equine-Assisted Therapies to take on 75 new south Palm Beach County riders in need and increase the programs’ presence in the area.
Impact 100 is a donor-advised fund of the Community Foundation of Palm Beach and Martin Counties, which acts as the organization’s back office. Each of Impact 100’s 220 members wrote a check for $1,050.
“We call what we do efficient philanthropy. ‘One woman. One vote. One meeting,’ ” said co-founder Tandy Robinson of Delray Beach. 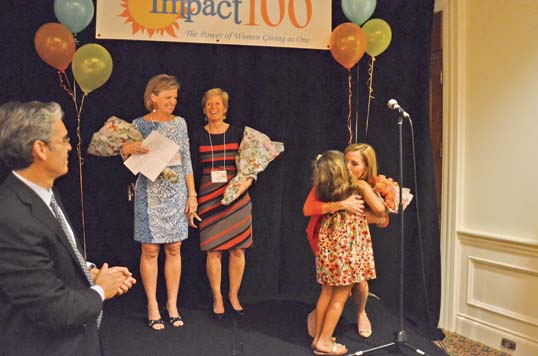 Impact 100 program coordinators Cindy Krebsbach (left), Lisa Mulhall and Tandy Robinson were honored for doubling the number of participants and their work on this year’s program. Jerry Lower/The Coastal Star

In its second year, membership has doubled under the leadership of founders Robinson, Cindy Krebsbach and Lisa Mulhall.
Anyone can be in the organization, said board member Karen Sweetapple of Boca Raton. “You don’t have to put in a lot of time, and people are interested in our organization for that reason.
“We put the word out as much as we could, so that we could take letters of inquiry from nonprofits who proposed to make an impact in south Palm Beach County,” she said.
This year, 85 nonprofits applied in one of five categories: arts and culture, education, environment, family and health and wellness.
“Behind the scenes, members who choose to be reviewers, read, rate and discuss the nonprofits, and decide which ones will be asked for a full grant application,” Robinson said.
At that point, the field was narrowed down to 29. “Those organizations received a 90-minute site visit, and from there, the members decided who would be the finalist in each category,” she said.
On April 18, those five made a presentation to the Impact 100 members at the Marriott hotel in Delray Beach, outlining how they planned to spend the money if they won the funding, how they would impact south Palm Beach County and how they planned to make their proposed program sustainable.
After the presentations, the members voted.
While the top two nonprofits received the bulk of the money, the three other nonprofits received the remaining funds.
They were: Delray Beach Center for the Arts at Old School Square’s program, Delray Reads — Summer Glide; Coastal Conservation Association of Florida’s south Palm Beach County artificial reef habitat project; and Children’s Home Society — Family 4 Kids.