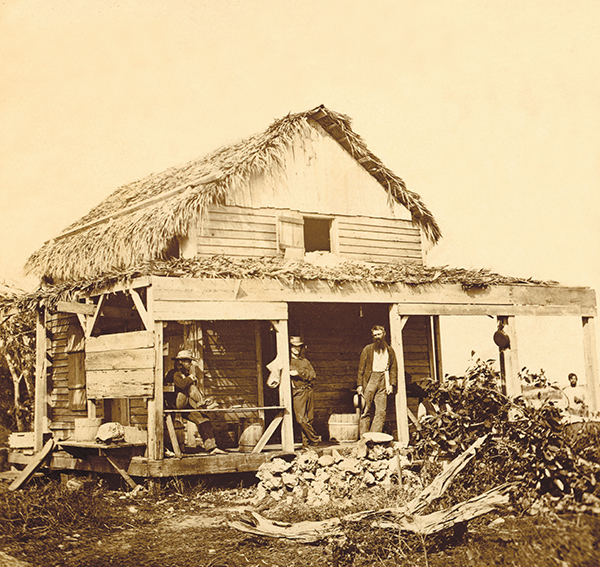 The Pierce homestead. The man on the right is Hannibal Pierce. The other men are unidentified. 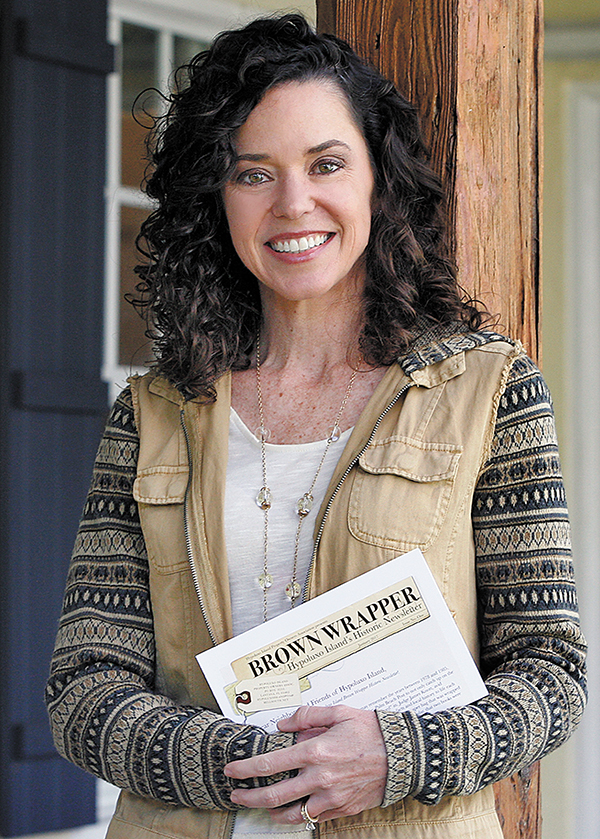 Such a little island. Such a lot of history.
Three miles long, perhaps a half-mile wide, Hypoluxo Island is home to a fascinating heritage too few who live here know.
Now the Hypoluxo Island Property Owners Association has resurrected another bit of local lore to celebrate the first land settled by white people in what is now Palm Beach County.
“The previous president of the property owners association and I were chatting about ways to bring the neighbors together,” recalls Michelle Donahue, the HIPOA’s current president. “And then I remembered the Brown Wrapper and thought, ‘Why not bring it back?’ ”
Every Sunday morning beginning in 1977, readers of The Palm Beach Post-Times relished a short historical essay by retired Circuit Court Judge James R. Knott, an avid historian with a scholar’s knowledge and a lover’s passion for the past.
Printed on heavy brown paper wrapped around the Post-Times, the Brown Wrapper appeared until 1985 and yielded two “Best Of” collections.
The reborn Brown Wrapper, Hypoluxo Island’s Historic Newsletter is more modest, but no less enlightening. The second edition, mailed to 475 homes in March, is a six-page collection of short articles chronicling the island’s earliest years, illustrated with photos. After this pilot season, the association’s plan is to publish the newsletter quarterly, in January, April, July and October.
“We’re not looking to give every ounce of our history,” says Donahue, who’s also a member of the Delray Beach Historical Society’s board of directors. “We’re just trying to bring you back to what brought people here to begin with. The beauty and wonder of it all.”
Donahue and her husband, Sean, have owned the island’s oldest house since 1999. It’s named Casa Lillias, after Lillias Piper, a nationally known interior decorator who had it built in 1927 from a sketch by her friend Addison Mizner.
Donahue sparkles with enthusiasm when she talks about her home’s past, the island’s past and the new Brown Wrapper’s future.
Consider, for example, two other homes on the island.
Here’s a humble homestead, built by hand out of timbers from a shipwreck.
And there’s a 23,000-square-foot mansion, home to the former Duchess of Marlborough and occasional host to Sir Winston Churchill.
Not so very long ago, both the homestead and the mansion stood within yards of each other. Perhaps they were even part of each other.
“My great-great-grandfather built the homestead in 1873,” says Harvey Oyer III, a West Palm Beach attorney and author of The Adventures of Charlie Pierce series, five books for young adults about Palm Beach County history.
Hannibal Dillingham Pierce (1834-1898) and his family were the first permanent white settlers in what became Palm Beach County, building a life on 160 acres of Hypoluxo Island provided by the Federal Homestead Act.
Oyer is the sort of dedicated history lover who uses “we” and “our” to describe things his ancestors built and survived nearly a century before his birth.
“We had a house done, but no way to put a roof on it, so we used palmetto thatching like a Seminole chickee hut,” he says.
The Pierce homestead was still standing in 1934 when Consuelo Vanderbilt Balsan (1877-1964) built the mansion she dubbed Casa Alva, after her mother.
She called it her “winter cottage.”
“Her first husband, the ninth Duke of Marlborough, was a cousin of Winston Churchill, and he used to visit her here,” Donahue says. “That’s certain, and there’s a rumor that he polished his famous Iron Curtain speech by the pool, but we can’t absolutely confirm that.”
On Feb. 26, the town held its annual “I Love Hypoluxo Island Day” with a picnic in McKinley Park. Norbert McNamara served his famous corn fritters. Stevan Carter, a Fort Lauderdale guitarist, sang Margaritaville and the Lantana Kiwanis Club sold hot dogs and hamburgers. Harvey Oyer delighted the crowd with family lore. And a Molly’s Trolley was full for a tour of the island, hosted by the Brown Wrapper’s newest historian.
“I’m not a tour guide,” Donahue told the passengers, standing up front with a microphone. “I don’t claim to be. I don’t want to be. But I love this island.”
On Land’s End Road the trolley pulled down the long driveway to Casa Alva, still standing, still impressive. But the Pierce homestead is gone.
After Hannibal Pierce’s death in 1898, the original homestead stayed in the family until 1916, when Russell Hopkins bought it.
In 1926, he sold it to John Demarest, who built additions to create his home, La Linda, which he sold to Consuelo Vanderbilt Balsan.
She dismantled La Linda to create a few outbuildings, and then replaced it with Casa Alva.
In 1957, Balsan sold Casa Alva to William E. Benjamin II, a developer who turned the mansion into the private Manalapan Club. The dues remained $400 a year until 1977, when Benjamin raised them to $500. Members balked and the club closed.
And the old Pierce homestead?
“My grandmother lived to be 101,” Harvey Oyer says. “I knew her well, and she told me the original house had been refaced and repurposed by the Balsans and used as servants quarters or something.”
Oyer called Bill Benjamin.
“And he said, ‘I think I tore it down.’ He said he didn’t realize the historical nature. Or maybe he did and didn’t care. He was a developer. But I’m convinced it’s not there anymore.”
Michelle Donahue hopes a reborn Brown Wrapper will    help her neighbors appreciate what’s not there anymore and learn more about the past of Hypoluxo Island.
“I’m in real estate,” she says. “I see people buy $5 million homes with a beautiful tree in the yard, and they say, ‘Who needs this?’ And they tear it down.
“But that tree was part of what made this island desirable in the first place.”