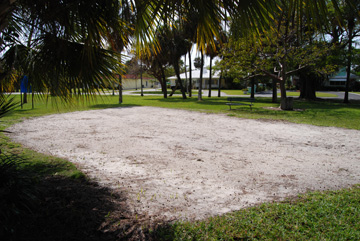 
McKinley Park on Hypoluxo Island has been a meeting ground, a community “piazza” that’s brought parents and children together over the years to bond and play. A main
draw for families, the playground equipment is now gone, removed without notice
or hope of replacement after town inspectors deemed it a safety hazard.


Lantana doesn’t have the money budgeted for the estimated replacement cost of the $50,000 play units, Town Manager Mike Bornstein said at a council meeting in
March. But is hoping to find a six-swing set for McKinley Park that has a
pricetag of about $5,000.


The equipment, up to an estimated 12 to 15 years old, deteriorated in the harsh environment of salt air and sand and was beyond saving, said Lantana Director
of Operations Mike Greenstein.


The attachments as well as the framework were cracked, rusted and dissolving, he said. “It couldn’t be repaired. It
was not an option.”


Parents and neighbors, caught by surprise when the equipment was scrapped, protested at a Town Council meeting in March, unhappy that they weren’t notified the equipment was unsafe or would
be removed and not replaced.


“It was there one day, gone the next,” said neighbor Diana Reed during a later interview. “It was just done so haphazardly, never giving us the opportunity to
do anything about it until it was too late. I think the decision was a
mistake.”


Reed spoke passionately during the meeting about just how important the playground was for the children — including her now-11-year-old son — and in fostering a
sense of community and camaraderie among young parents. Some of her son’s best
friendships were formed at play in the park and her family made close friends,
Reed said.


Bornstein apologized at the meeting for not notifying the neighborhood and Mayor David Stewart suggested grant money or other financial aid might be more easily found
if the residents initiated a grassroots effort to raise part of the funds.


Judy Black, president of the Hypoluxo Island Property Owners Association, planned to bring up the possibility of fundraising for new equipment during her
organization’s subsequent meeting. She knew at least some residents would think
it unfair for the town to fund its $25,000 July Fourth fireworks display, but
not replace McKinley Park’s playground equipment.


“The town will put in the swing set and we will maybe, hopefully, work together to put in some of the other equipment,” Black said following the homeowner group’s
meeting that was attended by some town officials as well. “It wouldn’t be the
homeowners association; it would be some money privately raised.”


Reed said the next step is “to decide what direction we want to take to put something back … to find money to put it back.”


Meanwhile, the lack of communication on the issue was unfortunate, Black added. “We were unaware of the situation altogether. These things happen. We usually have very
good communication and are on good terms.”