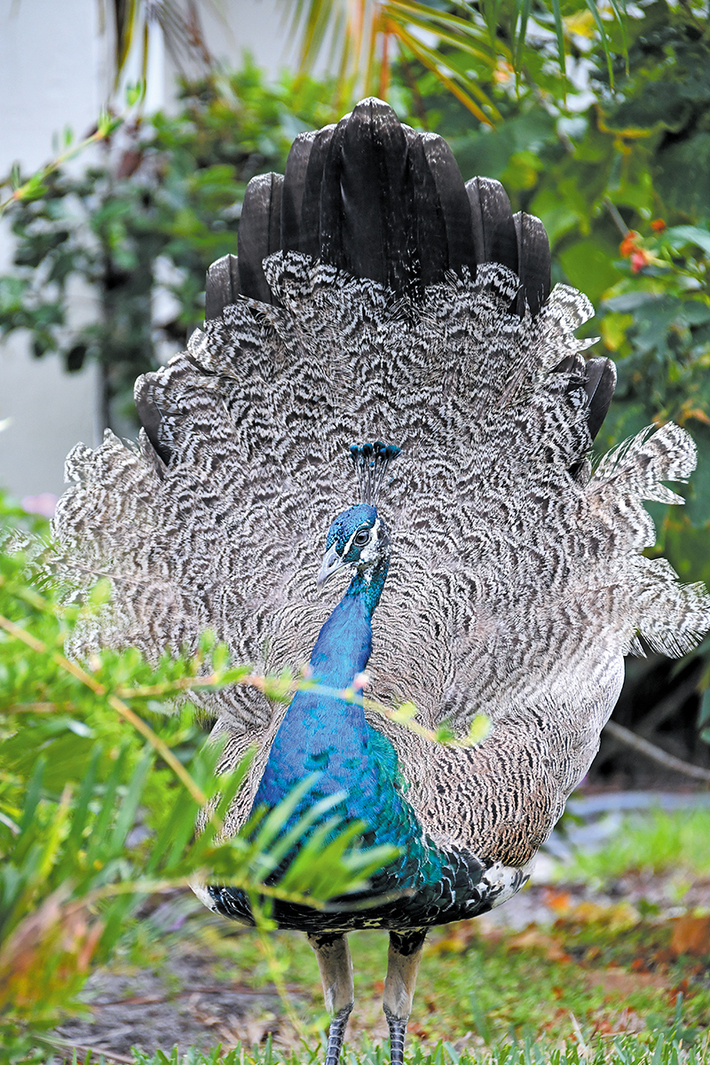 This peacock — described as ‘quite a handsome one’ — showed up about a year ago. Photo provided by Susie Bowman

Ann McGlinn-Work hesitated, pondering, trying to remember.
“I think it goes back to a little over a year ago,” she decided. “All of a sudden it just appeared on the island. No one knows where it came from or how it got here.”
At first, no one knew the proper pronouns with which to address him or her, he or she, either. But a year later, the peacock from nowhere has settled in, to become one more friend and neighbor Hypoluxo Island’s humans greet, feed and photograph on their walks.
“In the beginning, we thought it was a peahen,” McGlinn-Work recalled.
A female peafowl is a peahen, the male a peacock.
After Susie Bowman spotted the peafowl near her house on Lagoon Lane, she posted some stunning photos on the island’s Facebook page.
“Oh, it’s a male,” Bowman concluded. “I read up on it.”
Maura P. Powers, a zoologist at the Palm Beach Zoo & Conservation Society, studied one of Bowman’s photos and agreed.
“It’s a peacock,” Powers reported, “and quite a handsome one at that.”
Or to be more specific, the Hypoluxo Island peafowl is Pavo cristatus, native to India and the most cosmopolitan of three species.
“The easiest way to distinguish the two would be to look at the color of the bird’s neck and head feathers,” Powers said. “The boys have a brilliant blue hue from their head to their shoulders.”
Like so many of us Floridians, peafowls are not native to the state. Most historians theorize the birds were introduced here in the late 1800s, when they were considered a status symbol.
However they arrived, they have stayed, with peacock flocks — called a “pride” or “ostentation” — having been reported from Cape Canaveral to Miami, and especially along the Gulf Coast.
“I heard there’s a community over on High Ridge Road,” Bowman said, “so we think maybe somebody brought an egg over to our island.”
Now the bird seems to have made himself at home, strutting about McKinley Park or perching atop the lion sculptures at the entrance to a home on Southeast Atlantic Drive.
This was probably a major flight for a peacock, which doesn’t fly much higher than the lower branches of a tree, and the birds are not generally aggressive.
“But they can be defensive,” Powers noted. “If you leave them alone, they will probably leave you alone.”
They can be loud, assaulting the ears with a loud, piercing honk when they’re startled.
“One of the neighbors has suggested we trap him and get rid of him,” Bowman said, but this seems to be a minority view. Most of the peacock’s new neighbors seem more eager to feed than exile him.
“My husband, Gene, leaves blueberries out for him,” McGlinn-Work said. “He’s not a fan of the strawberries or raspberries we leave out. I see him eating cat food off a porch. He looks like he’s being very well fed on the island.”
One islander is reportedly feeding him Cheerios, which he also accepts.
The Palm Beach Zoo is home to a peahen named Sally Ride, after the first American woman in space. For a while there was talk of a naming contest for the island’s peacock, but it hasn’t gone anywhere, McGlinn-Work said.
“I’ve heard Penny the Peacock, for the alliteration,” she said. “My husband and I called him Michael Jackson because he does a really good moonwalk when he gets excited. He puts up his tail feathers and all his down gets fluffed up and he kicks his butt at you and does the moonwalk.”
Moonwalking or not, the peacock seems to be on the move. He’s been spotted from the northern end of the island south to Point Manalapan, and now Publix, at the corner of A1A and East Ocean Avenue.
“I saw him in the Publix parking lot,” McGlinn-Work reported. “I think he’s probably trying to find a mate.”
Bowman agreed.
“When the plumes come in, that’s to attract a mate,” she explained. “He’s been paying a lot of attention to the ducks on the island. He’s trying to buy them a cocktail, but they won’t have any part of it.”
One theory being tossed around is that because the coronavirus kept more residents home, perhaps wildlife have felt more comfortable emerging.
“Or perhaps more time spent close to home has led people to become more observant of the wildlife around them,” Powers suggested. “Personally, I’m hoping for the latter.”
Wherever he came from, however long he stays, the humans of Hypoluxo Island have welcomed him, one more flash of color in a colorful community.
“I love him,” Susie Bowman said, speaking no doubt for many. “I love seeing nature. That’s what’s so great about Hypoluxo Island. We have foliage and canopy, but we have little bits of nature, too, and he always puts a smile on my face.”