The next time a minimal hurricane threatens to slosh ashore in south Palm Beach County, most coastal residents won’t be ordered to flee.
In fact, evacuation of the barrier islands from the Palm Beach Inlet to Boca Raton won’t be considered until a storm puffs itself up to Category 2 strength with the threat of a strong storm surge.
Across Palm Beach County, that means that nearly 138,000 people who in the past would have been encouraged to find other shelter in a Category 1 hurricane can now stay home and ride out the storm.
The exceptions are those who live in mobile homes — that’s you, Briny Breezes residents — substandard housing or in extremely flood-prone areas. They still will be ordered to leave by emergency officials.
“We don’t want to unnecessarily evacuate anyone,” said county Emergency Manager Bill Johnson. “With evacuation, there’s the problem of traffic congestion and the possibility of getting caught on the road in a storm.”
Based on the newest technology, emergency managers have drawn five new evacuation zones, replacing the current two. Although the zones are tied to hurricane strength categories, the rules aren’t hard and fast. Evacuation zones are based on storm surge and flood likelihood, rather that wind strength.
That means a storm coming from across the state from the west, like Wilma in 2005, might require fewer evacuations than a hurricane of the same strength from the east, since the storm surge from the western storm would presumably be less.
“The rule is: run from surge, hide from wind,” Johnson said.
Topography maps dating to 1982 and based on old-fashioned surveying sticks have been replaced in recent years with laser-guided measurements that have cut the margins of error from 5 feet to 6 inches.
The redrawn maps are then updated with the National Hurricane Center’s latest computerized model runs of individual storms to give managers far more precise information on timing and storm surge on which to base their evacuation decisions.
The result is less “err on the side of caution and evacuate” and more fact-based evaluation.
“From a public safety standpoint, and that’s what counts, we have more pinpoint, more accurate information to make decisions down to the neighborhood level,” Johnson said.
The result: no one but the exceptions (mobile homes, easily flooded areas) evacuates under Plan A (Category 1). Last year, all of the barrier island residents would have been ordered out.
Evacuations don’t kick in until Plan B (Category 2), when barrier island residents and a few others would be asked to leave. Still, 64,000 fewer people countywide would have to find other shelter than under previous plans.
Only in a Plan E evacuation (Category 5) would more people be forced to leave than is required now. It would have the largest effect in Boca Raton, where nearly all of the part of the city south of Glades Road and east of Interstate 95 would be evacuated.
One of the problems in past storms is that many people refused to leave when ordered, believing they knew their local flooding likelihood better than the emergency managers.
Johnson hopes the more precise and more locally based decisions will result in better response from the public.
“I think we’ll see better compliance which, to me, is the ultimate goal,” he said.
The new hurricane evacuation zones won’t have any effect on flood insurance premiums, said emergency managers and insurance analysts.
The new maps used by Palm Beach County aren’t the same ones used by the Federal Emergency Management Agency on which flood insurance premiums are based. For one thing, FEMA’s maps are decades old, although many are being updated.
Evacuation maps based on storm surge don’t necessarily reflect other flooding possibilities, insurance analysts said. “Evacuation maps have little effect on the actuarial tables derived from FEMA’s flood zone maps,” said Michael Barry, vice president of the Insurance Information Institute, a nonprofit, industry-based agency.
So, the new evacuation maps may save an Ocean Ridge resident the price of a hotel night in Orlando, but not a reduced flood insurance premium. 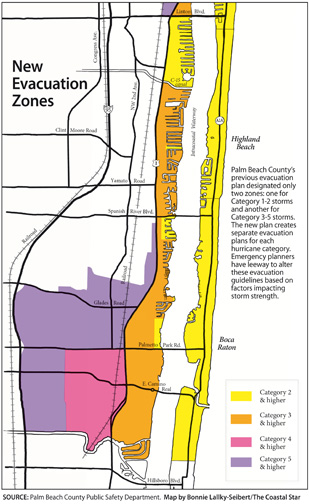