Photos: Preparations | Watching the Storm | Readers' Photos
Video: A1A in Manalapan
Editor's Note: Near-neighbor Bahamas needs all we can give, do

By Ron Hayes
and The Coastal Star staff

Harry Woodworth built his house along the Intracoastal Waterway in Boynton Beach to survive a Category 3 hurricane.
He installed impact windows that could shield him and his wife from winds up to 129 mph.
But confronted with Hurricane Dorian, grinding away a mere 100 miles east of his Northeast 15th Place home, with winds threatening to remain Category 5, the retired Motorola project manager turned to his evacuation plan.
He filled the tank on his RV with enough gas to reach the Alabama state line.
And then he did the unthinkable.
“I got nervous and put up shutters on top of the impact windows.”
And then he took them down again and started cleaning the garage and porch.
“We really, really got lucky,” he said.
As did we all.
From South Palm Beach to coastal Boca Raton, as Hurricane Dorian sat on the Bahamas, residents and local governments did what they could to prepare for the worst, hoped or prayed for the best, and sighed with relief when the storm turned north.
“By the grace of God, we were spared,” South Palm Beach Mayor Bonnie Fischer said. “We should all count our blessings today. It could have been much worse.”
Despite Palm Beach County’s evacuation order, not everyone in town heeded the warnings.
“I know quite a few stayed.” the mayor said. “We’re going to get a better idea of the numbers later.”
Her initial impression was that beach erosion was minimal.
“From my overview I’d say we’ve done pretty well,” she said. “I don’t want to say we’re perfect until I can get out and see more.”
In Ocean Ridge, residents responded to the evacuation order promptly, said acting Town Manager Tracey Stevens.
“For the most part, our residents were cordial and understanding and made plans based on the information given,” Stevens said. “Therefore, evacuation went very well.”
Other than beach erosion, the town suffered no observable damage, she said.
Manalapan Town Manager Linda Stumpf said she hoped everyone did as well as her municipality did.
“We lost a palm tree on private property — that’s it,” Stumpf said.
Highland Beach lost a few tree limbs and had some minor street flooding, Police Chief Craig Hartmann reported. The storm, along with the normal king tide, sent water over the seawall to flood a parking lot across from the Delray Sands resort but created no problems on the roadway, he added.
Flooding was common most everywhere.
On Marine Way in Delray Beach, Genie DePonte borrowed a neighbor’s kayak Sept. 3 to paddle down the street she’s lived on for 30 years.
“My boots are not tall enough,” she said. “The water is in my crawl space.”
Neighbors without a crawl space were no doubt flooded by the 3-foot flooding.
At the Atlantic Crossing project at the corner of Federal Highway and East Atlantic Avenue, holes dug for an underground garage were filled to the brim, Delray Beach native John Miller noticed.
Even the mobile homes of Briny Breezes were spared wind damage and only inconvenienced by the waters.
“My sense is we came through it very, very well,” Alderwoman Kathy Gross reported. “We had minimal damage, mostly from king tide and storm surge.”
Streets flooded, Gross said, but no homes suffered water damage, and while some brave residents chose to stay in their mobile homes, most evacuated. 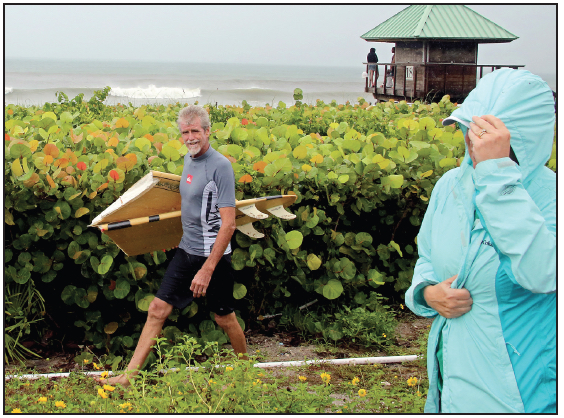 Delray Beach resident Michael Kanneli exits the beach at Spanish River Park in Boca Raton with his surfboard in two pieces thanks to the fierce waves spawned by the hurricane. Tim Stepien/The Coastal Star

As Dorian skirted the coast on Sept. 3, surfers celebrated the waves.
In Boca Raton, parking is prohibited along State Road A1A, but cars lined the highway beside beachfront parks.
After finding the waves at Deerfield Beach “too much,” brothers Brandon and Nathan Sectaello found the shore at Red Reef Park more approachable.
“It’s not too often they’re bigger than 3 feet,” Brandon said, eager to ride the 4- to 6-foot swells.
Boca Raton officials reported no damage and no power outages.
Gulf Stream Mayor Scott Morgan also said everything went “very well.”
“No incidents at all to my knowledge,” Morgan said. 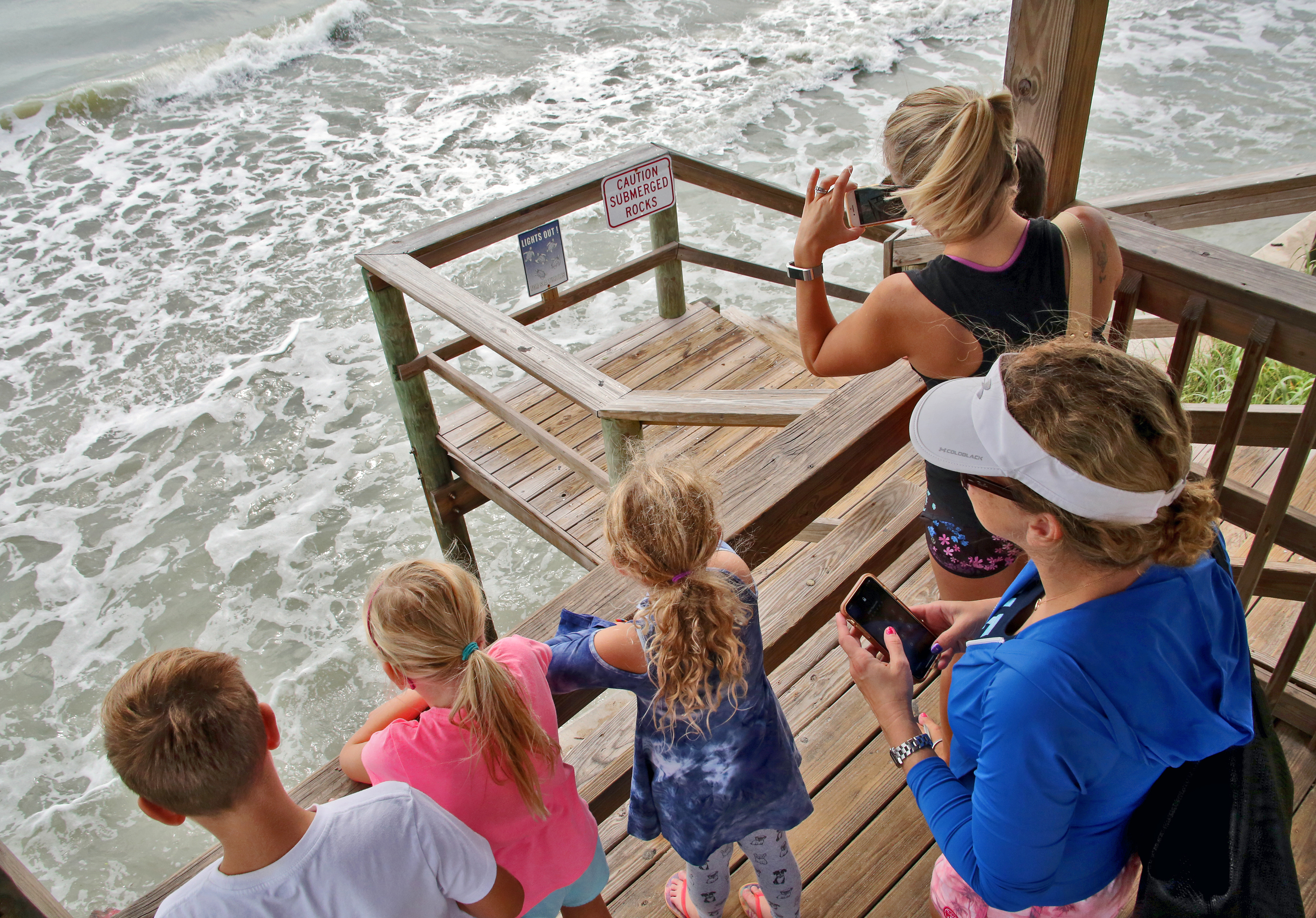 The Meinbach and Sirhal families came to Lantana Public Beach on Sept. 4 in hopes of finding seaglass and shells that washed ashore from Dorian. However, all they found was a closed beach and limited view from the staircase. Tim Stepien/The Coastal Star

By Wednesday, life was returning to normal.
“Lantana returned to 100 percent operation Sept. 4, including garbage and trash,” said Mayor Dave Stewart.
Apart from nuisance flooding and some minor damage to two boardwalk stairways, the town had no significant damage.
“We didn’t suffer any facility damage, infrastructure status is normal and all personnel are safe,” director of operations Eddie Crockett reported. “Overall, we fared very well.”
For two days that often felt like a week, coastal residents waited, and once the forecasters were proved right and the disaster that might have been had passed, life returned to normal quickly and residents were eager to celebrate.
At the popular Dune Deck restaurant in Lantana, owner John Calomiris took down the awnings, stored away the furniture and closed for two days.
“We are blessed on our side that nothing happened bad,” he said when the awnings were up again, the furniture back and diners dining.
“I got some holy water and sprinkled it into the ocean. I’ve done that every time a hurricane is close for the past 29 years,” he said. “And it works.”