While Gray Smith was busy settling in as the new head of Gulf Stream School back in July 2019, his wife was busy looking for something she couldn’t find in town.
Sarah Smith needed a place to ride horses.

“I grew up in Overland, Kansas, and I’ve been riding since I was a little girl,” she explains. “I had Dustin, a thoroughbred gelding I showed at high-level shows. When I went off to Stephens College in Columbia, Missouri, I was able to take him with me because they had an equestrian program. And then I rode in law school, too.”

Smith asked around, and learned two things. A lot of adults and children in the coastal communities ride, and most recommended Bramasole Stables at Johnson’s Folly Horse Farm.

Now Smith is out there twice a week, riding a jumper named Keke.

“I just love the animal,” she says. “Horses are such beautiful creatures. They’re very smart, and then there’s the sport, which is one of the few where men and women compete against each other. You and the animal are competing as a team.” 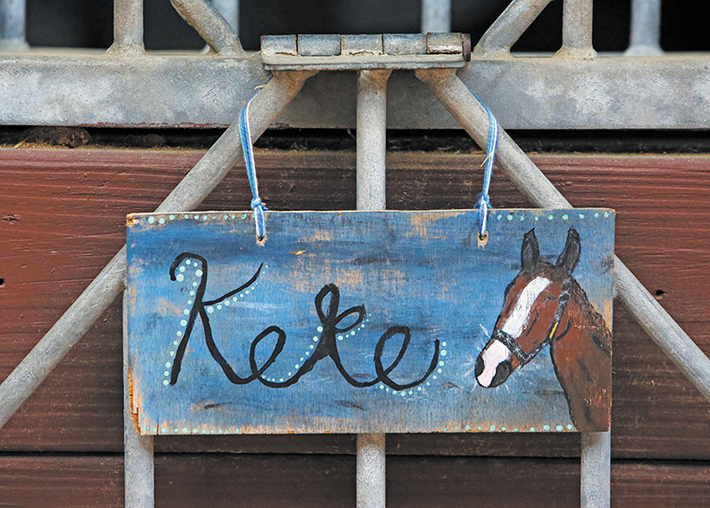 Ward Smith has been riding since he was 4 — half his life. At Bramasole, he favors an American paint named Rocky.

“I almost fell off once when my foot came out of the stirrup,” he says, “but I love riding. It’s fun. It makes me feel good.”

The owner and trainer at Bramasole is Kim Nadler-Russo, who began riding in the first grade, started competing at horse shows in the fifth grade, and has made a career of her love for the sport.

In 2003, she opened her first stables in Parkland and named it Bramasole, Italian for “under the sun.” Eight years ago, she brought the business to Johnson’s Folly Horse Farm.

“About 30 or 40 percent of our riders are from the coastal communities,” she says, “and many of those are from the Gulf Stream School.

“We show from beginners to Double-A, the highest level of competition. We’re a lesson and show barn, a more advanced farm. We don’t do trail rides. No birthday parties, no pony rides. We’re a serious barn.”

Another serious equestrian from Gulf Stream School is Sarah Ghostine, 14, of Hypoluxo Island, who came to riding when a school friend shared her love of horses. Her mother, Debra, was not sure this was a good idea.

“I said, ‘OK, try it,’ but I was kind of hoping she’d maybe not get too into it,” she recalls. “Then Sarah said she wanted to take lessons and I had to go up to the horses and pretend I wasn’t nervous.”

That was five years ago.

“When I started, I hadn’t been into sports,” Sarah says. “I was only concentrating on academics, so I started riding for fun and came to love the animals.”

Now she’s at the stable six days a week from 3:30 to 6 p.m. Then home to homework. The family leases a Holsteiner named Luke The Duke, and for Sarah, he’s not just a horse. He’s a teammate in the sport.

“Luke loves his job,” she says. “He has such a passion to go out there and jump and have fun. Sometimes he refuses to jump. He’ll stop short right in front of the fence. There’s so much you have to think about when you’re riding. Posture, legs and sitting tall. You can have bad rides, too.” 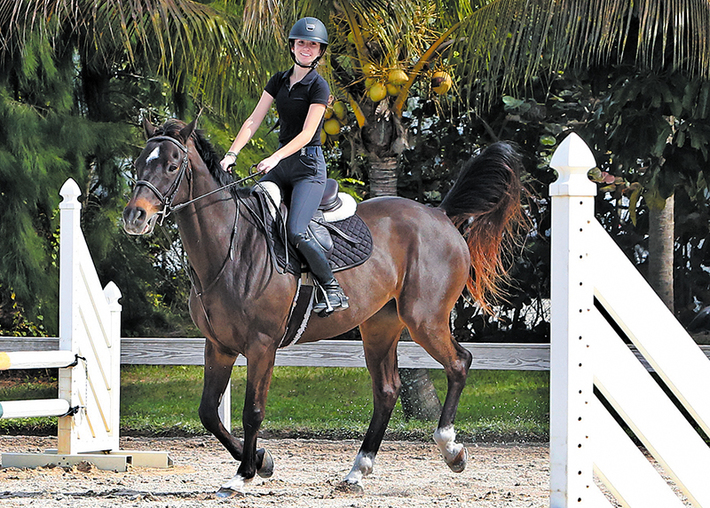 Allison Adams of Ocean Ridge was visiting her grandparents in Londonderry, Vermont, where a neighbor used a draft horse named Pete when collecting maple syrup.

“I met my first horse at 3 years old and I was in love,” Adams recalls.

At 16 she was working at a show stable back home in Pennsylvania, and a year later she got her first horse, Roy, short for Royal Ascot.

Since then, she’s had Knight Course and Willow Grove, Nugget, Frosty and Picasso.

These days, it’s Cantankerous, a gift from her husband, Bob, for their 20th anniversary.

“I call him Tank for short because he looks like a tank,” she says. “He’s huge and tall and wide. The most impressive horse I’ve ever seen in my life. To have control of a 1,500-pound animal is the most amazing feeling, the adrenaline rush of getting him to do what you want. But if you’re scared, the horse can sense it. You have to have horse sense or you’re going to get stepped on.”

Six days a week, she and Tank are together at Bramasole.

“It’s like a family here at the farm, friendly and laid-back with a top-notch riding program,” Adams says. “Kim’s a great trainer.”

A love of horses does not necessarily travel from parent to child, or vice versa. Gracie Robinson, 13, of Delray Beach, has been riding since the first grade. At Bramasole, her horse is Sky. But ask her father, Joe, if he rides and you get a poker-faced reply.

They’re a special breed, equestrians. Talk to several riders, and you find that, whether they own horses or lease them, no matter their age or the breed they ride, they share a common experience.

They started out riding a horse, and wound up having a relationship with it.

“It’s different every day, and it’s a humbling sport,” Nadler-Russo explains. “One day you’re on top of the world and the next day you can’t do a basic exercise, so just because you’re in the mood to do something one day doesn’t mean the horse is. People don’t realize that both the rider and the horse have to be athletes.