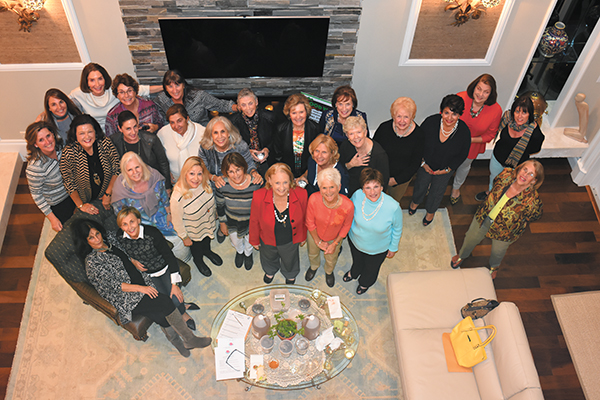 About 30 members of the Ocean Ridge Garden Club were on hand at the club’s January meeting.

The organization is celebrating 50 years of serving the community and developing friendships. 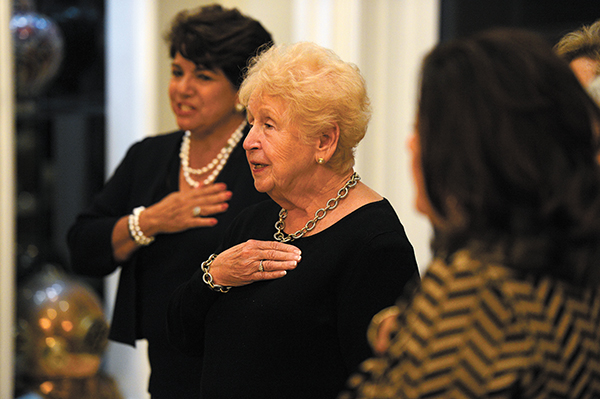 the Pledge of Allegiance at the beginning of a garden club meeting.

From that spirit, the town is beautified.

And club members have been doing it since 1966. Beginning March 20, the club will initiate three days of festivities to celebrate its half-century of horticulture.
“We’ll have a kickoff reception in Town Hall, which will be beautifully and exquisitely decorated with award-winning arrangements,” promises Lynn Allison, chair of the club’s 50th anniversary committee.
A floral decoration will adorn the hall’s exterior. A colorful slide show will play within, and signs will rise along Ocean Avenue.

A commemorative pamphlet, A Gardening Guide for Living on the Barrier Island, is being prepared, and guest speakers such as landscape architect Pamela Crawford and John Lopez, past president of the Tropical Orchid Society, will appear throughout the week.
“And we’ve scanned 50 years of scrapbooks to create a memorabilia book of highlights that will be on display,” Allison adds. 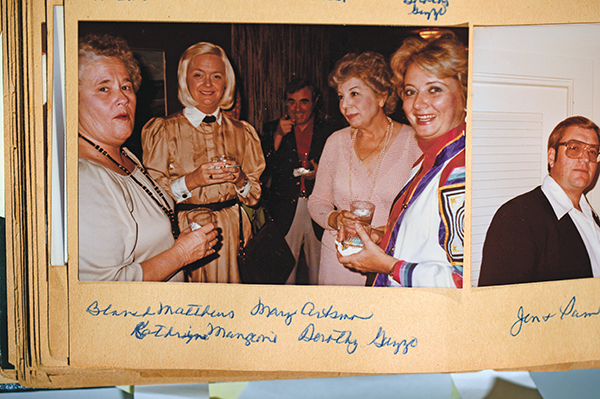 at a 1984 Christmas party at Crown Colony Yacht Club. 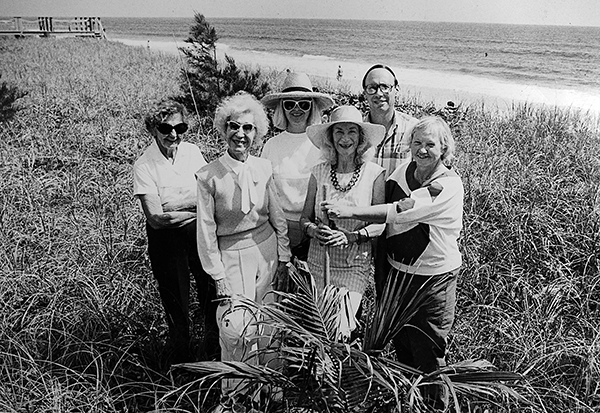 and Mayor Eric Mangione during a 1986 beach planting. 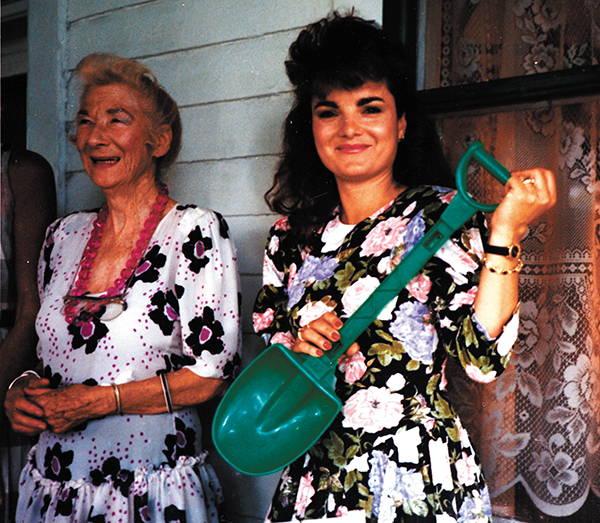 But the Ocean Ridge Garden Club that’s pressed between the pages of those early scrapbooks is not the same club that thrives today. Like its gardens, the club also has grown.
When it was formed in 1966, about 24 members paid annual dues of $5 to join. Two years later, the club had grown to 29 members and the annual dues to $10.
Today, the club boasts 45 members and $50 dues. But as the wider culture has changed, the club has reflected those changes.
Glance at a list of past presidents.
The first was Mrs. Cyril Schley (1966-67), and then Mrs. Alfred Rush (1967-68). There was Mrs. John Ware (1973-74) and Mrs. Donald Lambert (1981-82).
Then, without warning: Joan Beck (1994-96). Women were no longer identified by their husband’s name.
The morning meetings were moved to evenings as more women went to work outside the home, and men were welcomed as members. Currently there are only two, but they are welcome. 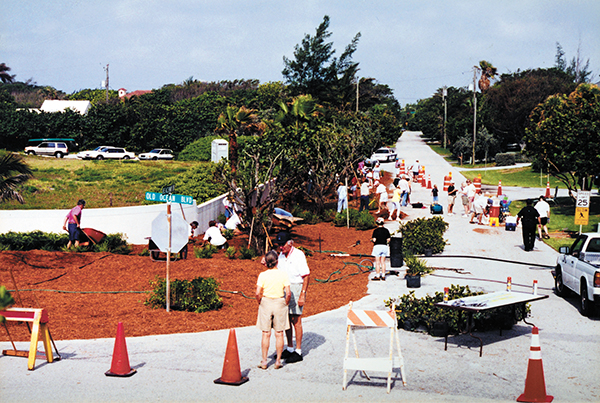 The Garden Club and some neighbors came together for a planting 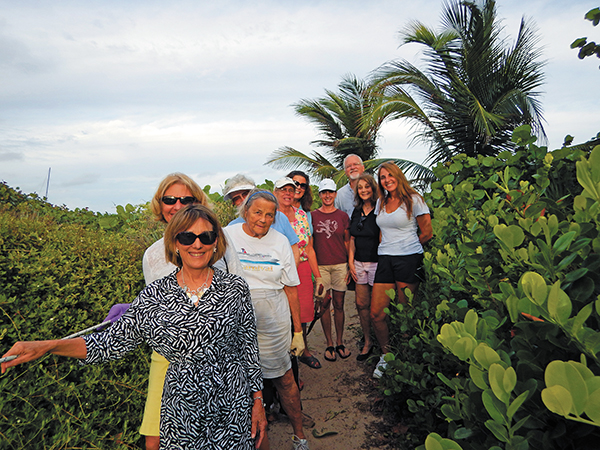 A dune restoration project underway at the south end of Old Ocean is one of the club’s most recent efforts.

Most significant, the club’s priorities expanded from floral table settings and Christmas wreaths to a community spirit that has championed beach cleanups, dune restoration and beautification projects.
“When I started, it was the Christmas bake sale and arts and crafts at the Town Hall,” Joan Beck remembers. “Now the shift is toward more hands-on projects.”
As early as 1974, club members were fighting a plan to desecrate the town’s hammock dunes in favor of 47 parking spaces.
Zoanne Hennigan became a member in 2006.
“To be honest, I joined to meet my neighbors,” she admits. “I knew little about gardening.”
Six months later, Hennigan was elected the club’s 31st president. She served for the next five years, during which members participated in eight beach cleanups, volunteered at dune restoration and established the Town Hall native garden, koi pond and library.
They raised more than $11,000 from annual rummage sales and used the money to award $1,500 in scholarships and send 21 children to Wekiva horticulture youth camp at Apopka.
“We’re not afraid to get our hands dirty,” says Kristine de Haseth, a member since 2008.
For the club members, nurturing friends and neighbors is no less important than nurturing flora and fauna, and they make no apologies for being both a gardening and social club.
Some, like Tami Tabshey and Ann Alexander, are seriously avid gardeners, growing peppers and lettuce, kale and broccoli at the Cason United Methodist Church’s community garden, to be donated to the Caring Kitchen for homeless people.
“But I joined because of Carol Burrows, my dear friend next door,” Tabshey adds. “It was a good excuse to be with her.”
Kimberlee Duke Marshall, the club’s current president, had lived in Ocean Ridge for 12 years before joining the club.
“I was busy raising kids and building a business, but since joining, I’ve met a lot of neighbors and gained a real sense of living in the community,” she says. “We have a variety of economic classes here. Seasonal residents, some more accomplished, some young families. But the common bond is that we all really care about this 1.3-mile barrier island we live on.”
From October to April, the gardening and socializing come together at the club’s monthly meetings, held at 6 p.m. in members’ homes.

“The Boynton Beach Garden Club meets at noon and they  have tea and coffee,” Hennigan says with a smile. “We have wine.”

At the January meeting, hosted by Tabshey, about 30 members feasted on chicken sandwich wraps and fresh fruit, cheese and crackers, nuts and hummus. And wine.
Lisa Ritota had lived in town 22 years before joining.

“I joined so I could be with a friend,” Ritota said. “And then she quit. I didn’t know 80 percent of the women in the group, and now they’re my friends. And I have a butterfly garden.”
She whipped out her smartphone, spun through some family photos and found a new photo. “My first caterpillar,” she announced proudly.
Eventually, the group settled down to hear the month’s featured speaker. Yavonne Tudisco is an expert on vermiculture — the breeding of earthworms to aerate soil and convert organic matter into compost.
“There are 6,000 different species of worms,” Tudisco told club members. And then she produced a visual aid, a small plastic bin housing red wigglers. The bin was passed around the living room from club member to club member.

Chances are, worms were not passed around when the ladies of the Ocean Ridge Garden Club first met in 1966. But that was 50 years ago.
“The club today,” says Stella Kolb, who joined in 1996, “it’s a lot more than clipping flowers and putting them in a vase.”