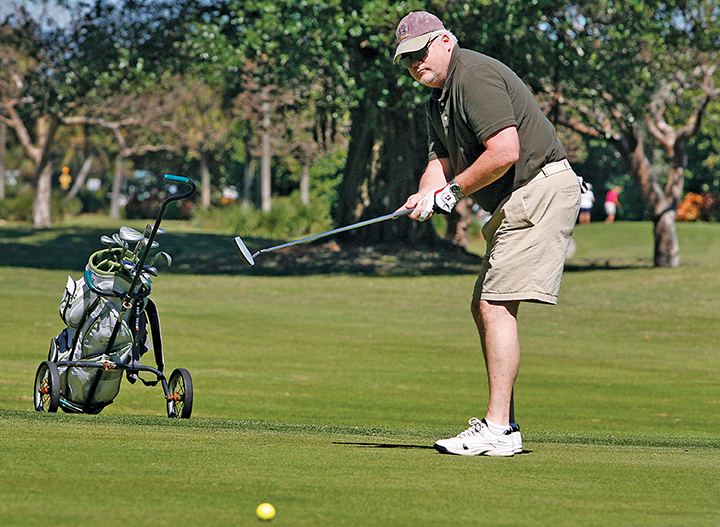 Doug Tunstall, who volunteers at Red Reef, plays a round of golf. 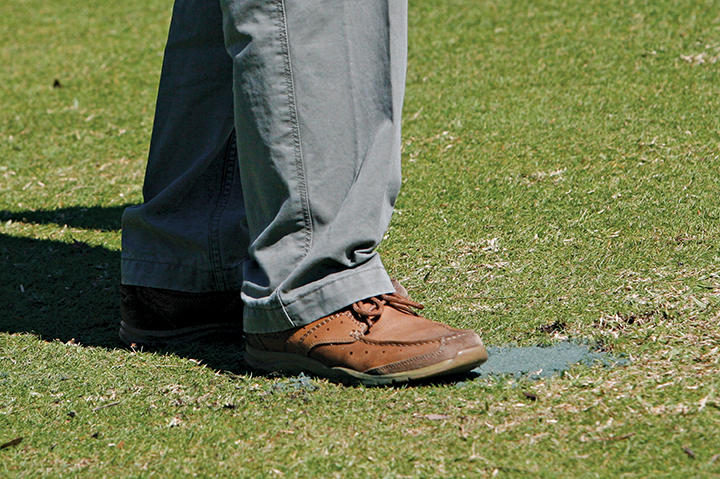 It is a goal many aging golfers have as they approach retirement: Sign up at their local club as a volunteer, work one or two days a week and get a drastic cut in course fees.
More and more, that dream is turning into a mirage.
Private courses throughout southern Palm Beach County have all but done away with their volunteer programs, and many municipalities hire full-time employees to fill what were once volunteer positions out of liability concerns. The biggest exceptions are Palm Beach County, which uses 100-150 volunteers to staff its three courses as well as the John Prince Learning Center in Lake Worth, and Boca Raton, which has had a bustling volunteer program for more than 30 years.
Todd Leckrone, director of golf at Atlantis Country Club, which has never used volunteers, said that while on the surface using volunteers is a good way to cut down on expenses, the chances of something going wrong isn’t worth the risk.
“Say you’ve got a guy driving a cart around your course as a ranger and he gets hit by a golf ball, or has a heart attack,” Leckrone said. “I’m not saying he’s going to think lawsuit right away, but it’s a possibility the way our society is today.
“For a private club to get tied up in something like that, you risk losing everything.” 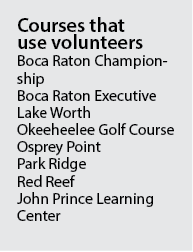 Paul Connell, the director of special facilities for Palm Beach County, who oversees the volunteer golf program, expressed confidence that the county is on firm legal footing.
“In Parks and Recreation we have a history of using volunteers in just about every area of our operation, and they are all covered by workmen’s compensation. If a volunteer did have a heart attack on the course, that wouldn’t necessarily be considered an accident. Workmen’s comp would cover that as well.”
Perhaps, but many municipalities are following the private clubs’ lead. The town of Palm Beach (Palm Beach Par-3), Boynton Beach (Links at Boynton Beach) and Delray Beach (Delray Beach Golf Club) also have no volunteer programs.
Among municipalities that do use volunteers, Boca Raton appears to have the most expansive and streamlined program. Golf Course Manager Greg Jerolaman oversees volunteers at three courses: Boca Raton Municipal on Glades Road west of Florida’s Turnpike, the adjacent executive course and the Red Reef Par-3 (recently renamed the Alan C. Alford Red Reef Golf Course in recognition of Alford’s years of service ­— as mayor, city manager, council member and park ranger).
Jerolaman said his program began in 1985 and currently uses 39 volunteers: 15 at Red Reef, 12 on the executive course and 12 on the championship course.
Thirty-one of the 39 are male and they all work five shifts per month totaling about 30 hours. In exchange, they play for $5, but only when openings in the schedule permit. In busy months such as February and March the playing opportunities can be extremely limited.
So how does one become a volunteer? The procedure is almost identical in the municipalities that use them, which include Palm Beach County (Okeeheelee in West Palm Beach, Park Ridge in Lantana, Osprey Point in west Boca Raton and John Prince) and Lake Worth.
Applicants do the paperwork at the course of their choice, with those applications forwarded to a volunteer coordinator. The city or county performs a background check, and if the applicant is approved, he or she goes through an orientation process followed by training specific to the golf course.
“Currently there is no waiting list, but we are always willing to take applicants for current or future volunteer opportunities,” Jarolaman said. “We display signage to promote these opportunities.”
Jerolaman said besides saving the city money, his volunteer program has been useful when he’s had paid openings to fill.
“Many of our paid part-time staff has come up through the ranks of having successfully served as a volunteer,” he said. “This makes our volunteer program kind of a feeder system for them to successfully move into the ranks of full-time employment, which helps serve our residents and the general public at the highest possible levels.”
As for litigation concerns, Jerolaman said Boca Raton has not considered the possibility.
“We have not experienced any liability issues and have no plans to hire staff to replace volunteers,” he said.