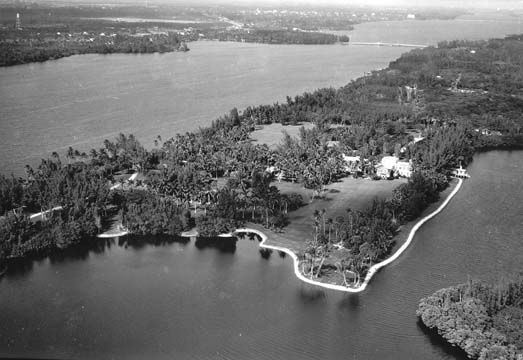 Casa Alva, built in 1934 for a Vanderbilt heiress, has been both a private home and a social club. Photo provided

Manalapan found its place on the social map with the construction of two grand homes for two great-grandchildren of shipping and railroad tycoon Cornelius Vanderbilt. One was built on the ocean in 1929 for Commodore Harold Vanderbilt. The other was Casa Alva, built across the lagoon in 1934 for Harold’s sister, Consuelo Vanderbilt Balsan.

Consuelo married into an aristocratic European family. Her husband was the Ninth Duke of Marlborough, making her the Duchess of Marlborough. Her domineering mother, Alva, arranged the match. After the pair divorced in 1926, Consuelo reconciled with her mother (the house’s namesake) and found true love with French balloonist Col. Jacques Balsan.

During the height of the Great Depression in 1934, the Balsans bought the south end of Hypoluxo Island and three nearby islands for $75,000.

There was a home on the 50-acre property. It was called La Linda and it had belonged to the John Demarest family.

Fatio had his work cut out for him because the house had to be renovated to include the couple’s priceless collection of exquisite 18th- and 19th-century, French hand-carved wood paneling. Collected from churches, castles and manor houses before World War II, the paneling varied in height so the ceiling height in different rooms had to vary, as well.

The wilderness mansion’s north wing became the bedroom wing and the south wing housed servants. The old garage area, with its cypress ceiling, became a living room. As Fatio’s work continued, all that remained of the original structure was a stucco tower.

Casa Alva mirrored the Balsans’ attention to detail and was known to be one of the most richly furnished homes in all of South Florida.

In 1957, the former Duchess of Marlborough, Consuelo Vanderbilt Balsan, sold Casa Alva to developer William E. Benjamin II. He turned much of the mangrove hammock island into a gated, luxury subdivision called Point Manalapan and transformed the Vanderbilt Balsan estate into a private social club and golf course.

Hotel service was available as well. Guest suites, with views of the lake or the golf course, were air-conditioned for heat or cooling. Many had private terraces and fireplaces.

It took two years to get Casa Alva into club form. Kitchens were modernized, a golf course was installed, men’s and women’s locker rooms and a snack bar were added to the old pool house, and the yacht docks were expanded.

By 1976, Benjamin determined it was time to raise the annual dues by $100. When members balked, he closed the club for good.

Benjamin, who had lived in a large Point Manalapan home overlooking Manatee Cove, moved into Casa Alva after the club closed. His wife, Maura, handled the interior design, making the 26,177-square-foot manse more light and airy.

New air conditioning was installed and kitchens were updated in the home, with its eight bedrooms (including two master suites), eight bathrooms and six half-baths, a stunning pair of wrought-iron-embellished staircases, and even a basement for storage. The house, on five acres of land with 500 feet on the water, even has a special closet for hats, a silver vault, and an elevator to the second floor.

Apart from the main house, there’s a four-car garage, pool, and a one-bedroom cottage cantilevered over the lake.