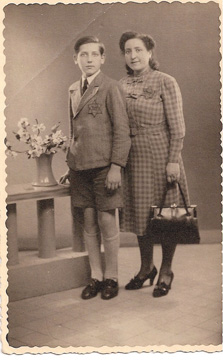 Georges Banet  and his mother, Thérèse, in
May 1942.  Two months later, the French police
came for them in the Vel D’Hiv round-up.
His mother died in Auschwitz.

Journalist Marlene Roberts will read a memoir and an interview concerning the Shoah, both of which were published in Hadassah magazine, during Yom HaShoah, Holocaust Remembrance Day, at the Highland Beach Library. 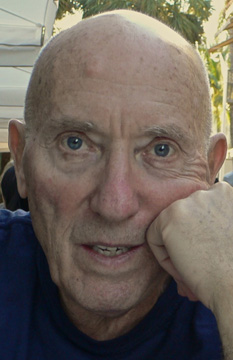 The memoir, The Presence of Absence, is about a 12-year old Jewish boy caught in the web of France’s infamous Vel D’Hiv roundup. He escapes, but his mother is caught and perishes in Auschwitz.  The memoir starts during the same period of history as Sarah’s Key, a work of fiction.  There are two differences in the fiction and nonfiction stories: One boy dies, the other lives. One story is resolved in 1942; the other is resolved in 2000.

The boy who escapes is George Banet, who lives in Highland Beach. Although Banet will not speak about what happened to his parents before they perished in Auschwitz — or of own his life during the Holocaust — he allows his writer/wife to accompany him on journeys into the past. He also allows her access to documents taken from his Paris apartment and saved by his Aunt Edmee.

George Banet came to the United States in 1948 to live with an uncle in Philadelphia.  After a career with a financial investment company, in 1994 he moved to Highland Beach. In 1996 Banet began volunteering at Florida Atlantic University’s Yiskah book collection. Arthur Jaffe at the time was setting up the Arthur and Mata Jaffe Center for the Book Arts and hired George away.

Today Banet selects and sets up art exhibits as a volunteer at the Highland Beach Library.

The second reading will be an interview with Dr. Vera King Farris, the first woman president of a New Jersey college, who in 1990 created a Holocaust Chair at Stockton College.