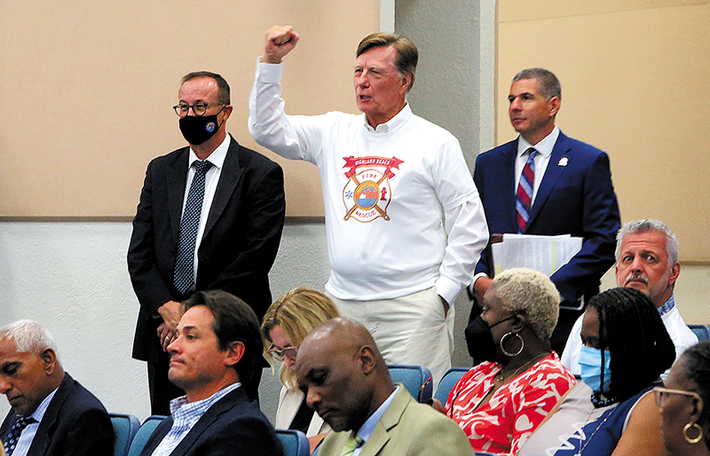 Start-up is first of kind in county since 1993

A unanimous decision by the Palm Beach County Commission has cleared the way for Highland Beach to create the county’s first new fire department in 30 years.
It took less than 10 minutes last month for county commissioners to grant a Certificate of Public Convenience and Necessity license, which is required before the town can provide emergency medical service once it starts its own fire department in May 2024.
“We’re good to go,” said Mayor Doug Hillman, whose town is ending a 30-plus year reliance on Delray Beach for that service. “We’re now able to provide enhanced, high-quality lifesaving services to our residents.”

Highland Beach commissioners, other residents and staff members wore T-shirts with the new fire department logo as they lined the back row of the County Commission chambers. Town Commissioner John Shoemaker addressed the commission ahead of its affirmative vote.

Hillman led a contingent of about 20 residents, commissioners and staff — all in T-shirts with the Highland Beach Fire Department logo — on a bus ride to the County Commission meeting. He emphasized the importance of receiving the board’s approval in a letter he sent to residents.
“This was a huge win for the town,” Hillman wrote. “The license is key to operating an independent fire rescue department in Palm Beach County.”
While the county’s decision to grant the license — following the recommendation of its Emergency Medical Services Advisory Council — came quickly and with little discussion, town leaders arrived at the meeting still not certain how the vote would go.
“Everybody was on the edge of their seats,” said recently appointed Chief Glenn Joseph, who previously advised the town on the fire department. “This was a very huge deal.”
County Mayor Robert Weinroth, who represents South County and expedited the approval, said he believes the commission found value in the EMS advisory council’s recommendation.
“The fact that the council was unanimous in its decision made it easier for the commission to grant the COPCN license,” he said.
Rick Greenwald, one of the residents who rode the bus to the meeting, credited the work of town staff for the County Commission’s quick decision to award the license.
“It was pretty clear that the town had done some serious ground work before it came before the commission,” said Greenwald, who has long supported the idea of an independent Highland Beach fire department. “It was a very successful morning from the town’s standpoint.”
Joseph said the town had worked on the 500-page COPCN application for almost a year and a half, covering all the bases required to provide emergency services.
“There was a lot of paperwork involved in getting us to this point,” he said. “The medical protocols alone were 300 pages.”
Had the County Commission balked at approving the license, the town would have suffered a major setback in its timeline and overall plans.
“If we didn’t have the county’s approval, it would be an uphill battle,” Joseph said.
Without approval from the commission, the town most likely would have needed to appeal to the governor, a process that could have been costly and time-consuming.
Joseph said that with the unanimous vote to grant the license, the town has the green light to move forward.
“We have vendor contracts on hold but we didn’t execute those until we knew what the timeline would be,” he said.
In his letter to residents, Hillman thanked the town staff, led by Manager Marshall Labadie, for its long hours and hard work and praised the efforts of fellow commissioners.
“I couldn’t be prouder of our team and community, but our work is not complete,” he said. “Over the next few months, we will be completing the design of a new Highland Beach fire station.”
Construction of the new station is expected to begin in early 2023. At the same time, Joseph will begin the process of hiring and training firefighters and paramedics and making sure the new department is ready “to go live” when its contract for fire service with Delray Beach expires in little more than a year and a half.
Town commissioners voted in April 2021 to split from Delray Beach Fire Rescue and start a new department. Commissioners, citing a consultant study, said they believed Highland Beach could provide quality fire service for less than the $5 million a year Delray Beach charged.
During the County Commission’s meeting last month, town Commissioner John Shoemaker spoke before the vote and reiterated that Highland Beach is focused on providing residents with the best possible fire rescue service.
“The town has made a serious commitment that is unique in the last 30 years,” he said. “We need this so we can deliver effective services and improved response times.”
The last time a new fire department was created in Palm Beach County was by the Village of Tequesta in October 1993.