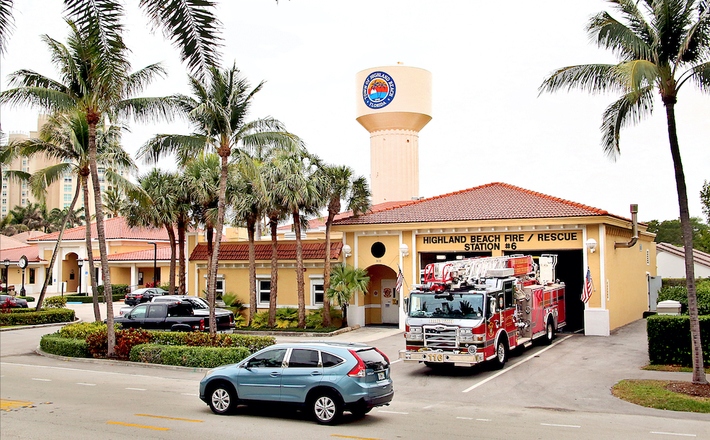 A ladder truck sits outside the Highland Beach Fire/Rescue station. The town voted April 20 to terminate its contract with Delray Beach and start its own fire department. Tim Stepien/The Coastal Star

After almost 30 years of paying Delray Beach millions of dollars for fire and medical rescue services, Highland Beach is calling it quits and moving forward with plans to start its own fire department.

At a meeting on April 20, town commissioners voted unanimously to notify Delray Beach of plans to terminate its contractual agreement – with a price tag of about $5 million a year – with a required 36 month notice effective May 1.

“We know we can deliver better service to our residents and we know we can do it at a lower cost,” Mayor Doug Hillman said. “There is no reason in my opinion to stay with Delray fire.”

During the next three years Highland Beach will be working out the details of starting a fire department almost from scratch, something that apparently hasn’t been done in Palm Beach County for at least three decades.

The move bucks a local trend in which smaller communities such as Ocean Ridge, South Palm Beach and Manalapan have been paying for services from larger departments including Boynton Beach and Palm Beach County Fire Rescue.

“It doesn’t appear there is room for negotiation as far as our commission and our fire chief are concerned,” Delray Beach Mayor Shelly Petrolia said following that meeting.

While Highland Beach officials repeatedly say they are happy with the exceptional service they receive from Delray Beach, town leaders balked at the costs they say are unsustainable.

The town currently pays about 40 percent of its annual operating budget or about $5 million a year for services from Delray, a cost that expected to increase by about $300,000 each year.

The current cost per call, Hillman said, is extraordinary.

While a consultant estimated that Highland Beach could save an much as $2.5 million in operating costs in five years after starting its own department, the town will also have to incur significant start-up costs between $7 and $8 million, Hillman said.

At the same time, Delray Beach will face finding ways to fill the estimated close to $6 million Highland Beach would have to pay after the three years if it stayed and also seek ways to respond to the approximately 667 calls each year within Delray Beach city limits that the Highland Beach station responds to.

Petrolia said she is confident the city can find ways to fill the gaps by moving personnel to meet area demands.

“Maybe we have to look at making our department more efficient,” she said.

Petrolia, who has been among the most vocal members of the Delray commission on this issue, said she understands Highland Beach’s concerns but does not think it’s fair for Delray Beach taxpayers to be subsidizing Highland Beach.

“Their millage rate is about half of ours,” she said.

She and Delray Beach Fire Chief Keith Tomey both said that Delray Beach does not make any money as a result of the agreement which calls for Highland Beach to pay for the cost of staffing a town-owned station with a full complement of 22.5 personnel.

During presentations to both the Highland Beach and Delray Beach commissions, Tomey pointed out that Highland Beach is considered part of the Delray Beach service area and as a result has access to all of that city’s resources should they be necessary.

He said his department provides Highland Beach with what he calls “the gold standard of medical care and fire service.”

Privately, however, some Highland Beach commissioners have argued that the town could be even more responsive to the needs of residents if it had its own department and didn’t respond to close to 670 calls in Delray.

With the additional apparatus, a Highland Beach department will respond to simultaneous calls quicker. Under the current arrangement, a second rescue truck usually comes from over the bridge if there are simultaneous calls in the town.

Highland Beach commissioners recognize that there is still a lot of work to be done and a lot of decisions to be made before the town is ready to launch its own department, but they say they are committed to making it work.

“The No. 1 objective and the No. 1 key point is the health and safety of our residents, not the savings,” Hillman said. “We will spend whatever we have to spend to make sure our residents get the best possible service.”