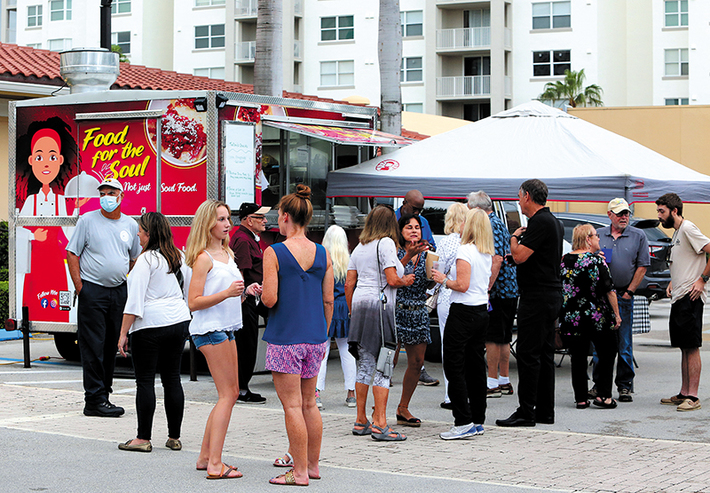 Highland Beach leaders are asking voters for a green light to spend up to $10 million to start a town fire department. Although the leaders are optimistic voters will approve, they are also concerned many will stay home when the initiative is on the ballot Nov. 2.
“I don’t think there’s a big buzz because residents think we can do it,” said Mayor Doug Hillman. “They just have general confidence that we know what we’re doing and a fire department is something we can handle.”
That confidence, he believes, is rooted in the town’s success running what he calls a “first-rate police department, a functioning full-service library, a water-treatment plant and our own post office.”
Still, to encourage voter turnout, the town has teamed up with a local advertising and public relations firm and has launched an “educational campaign.” It includes everything from email blasts and direct mail pieces to videos and evenings with food trucks offering up free bites and beverages.
The town — which is ending its long-standing fire service contract with Delray Beach — has also come up with a slogan: Our Town, Our Station, Our Heroes.
“The challenge for us is to make sure people understand the benefits of having our own fire department,” Hillman said.
Resident John Ross, who authors a blog often critical of town leadership, says he believes the ballot initiative will pass resoundingly and says there is not a lot of talk about it because it isn’t a controversial subject.
“I’ve met just one person who is voting against it because they believe Delray is doing a good job.” Ross said. “That’s understandable but not at the current cost.”
For almost 30 years, Highland Beach has been receiving fire service from Delray Beach, which staffs the town’s fire station. In April, however, town leaders voted unanimously to end the contract agreement with Delray Beach and create a town-run fire department over a three-year period.
Hillman and other commissioners have repeatedly said they believe the town can provide better service to residents at a lower cost than what Delray Beach charges.
In its 2021-22 budget, Highland Beach expects to spend about $5 million on fire service from Delray Beach. That does not include the cost of adding three people to the current staffing to ensure three paramedics are on the rescue vehicle at all times.
While Highland Beach is refusing to pay the cost for the additional staffing, saying its contract calls for the town to pay for only 22.5 personnel, Delray Beach continues to say a clause in the agreement allows it to increase staffing and charge the town for enhancements.
Delray Beach Fire Chief Keith Tomey, through a spokesperson, said the department expects to have a third person on each rescue beginning this month.
As Highland Beach officials continue to meet with residents, they consistently point out that the new fire department will have two fire trucks and two rescue vehicles operating out of the station next to Town Hall — as opposed to the one fire truck and one rescue vehicle currently at the station and staffed by Delray.
Staffing, according to a proposed organization chart, would increase to about 25 people, including seven personnel on each shift and a chief, two administrative captains and an administrative assistant.
“The No. 1 objective for us is to have the best possible service for our community,” Hillman said. “It just happens we can do it for less money.”
Some residents have also expressed concern over a significant number of calls in southeastern Delray Beach being handled by crews staffing the station in Highland Beach.
“I see vehicles from here going out of town all the time,” said resident Arvid Johanson, a former Scarsdale, New York, firefighter. “Everyone feels our taxpayer money should stay in Highland Beach.”
While a lot of variables remain to be figured out, town leaders believe they can run the fire department at about $1.5 million to $2 million less than the $5 million annual cost from Delray Beach and can recover the costs of starting a town-operated fire department in about five years.
Should voters approve the plans, town leaders will need to decide where the needed funds will come from. Hillman and other commissioners have said they favor using some of the town’s $6 million in reserves and are in favor of either a bank loan or a bond issue, both at favorable rates.
A large chunk of the $10 million, about half, will go toward expanding the current fire station from about 5,100 square feet to about 12,000 square feet. The expansion will include two more bays and bunking facilities for additional personnel.