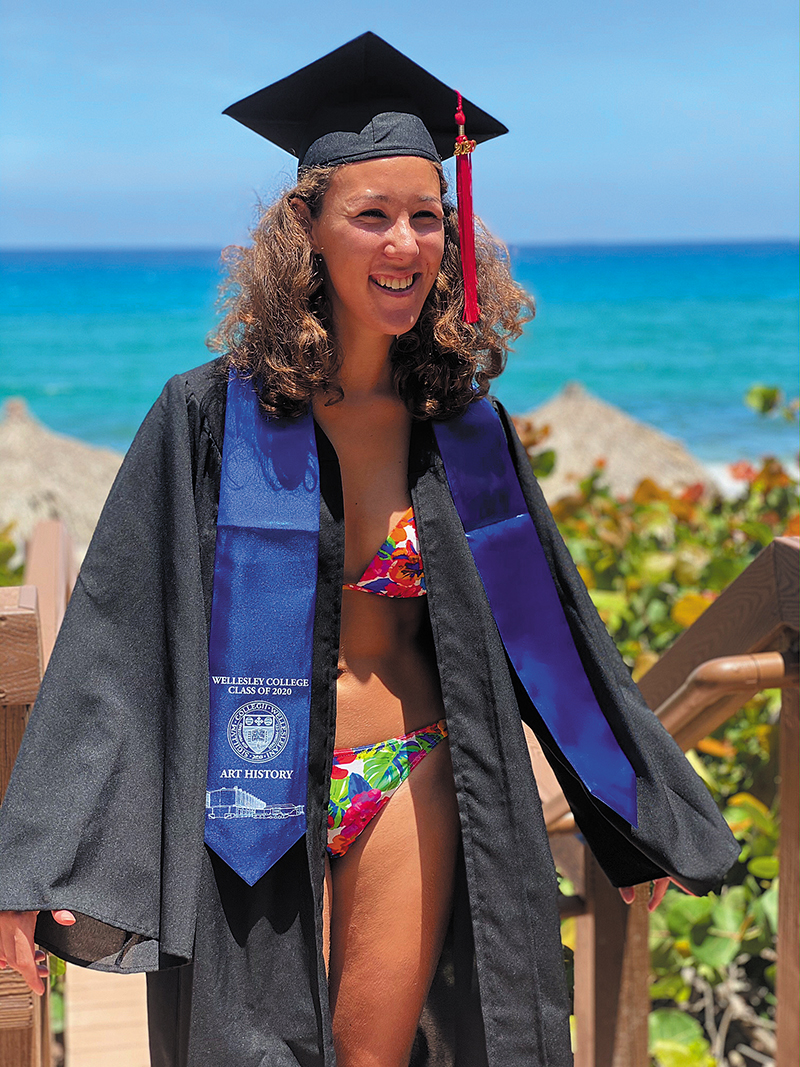 Diane Schrenzel celebrated her graduation from Wellesley by donning a bikini under her cap and gown. Photo provided

Soon after she and close to 570 other Wellesley College students received their degrees in a Sunday afternoon virtual celebration, part-time Highland Beach resident Diane Schrenzel strolled across State Road A1A to join friends and family in a celebration.
At the beach party overlooking the ocean, Schrenzel had a chance to wear the cap and gown that she would have worn on the prestigious school’s Massachusetts campus had it not been for the COVID-19 pandemic.
Under the gown, however, she dressed for the environment, wearing a brightly colored bikini that helped her blend in with others on the beach.
“Only in Florida would you be able to graduate in a bikini,” she said.
After the cupcakes and macarons were gone, Schrenzel posted pictures on social media and received more than 150 likes.
“I just thought it was fun to wear a bikini under the gown,” she said. “But it was also practical.”
In addition to the accolades she received during the May 31 celebration, Schrenzel — along with some other young Highland Beach residents — is getting recognition from town leaders for reaching an academic milestone.
On its website, the town has listed the names of about 15 graduates, ranging from those who completed kindergarten to those who earned college degrees.
Highland Beach is also displaying a banner in front of Town Hall praising the students, and each will receive a letter of congratulations for the achievement.
Commissioner Peggy Gossett-Seidman, in response to a resident’s request, brought up the idea to have the town do something for graduates in a year when traditional graduations went by the wayside.
The town put out an email call and learned that six residents had received college degrees, two graduated from high school, four from middle school and three from elementary school or kindergarten.
“We had so many more than we expected,” Gossett-Seidman said.
Vice Mayor Greg Babij, whose son and step-daughter have their names on the banner, said he is glad the town is offering the recognition.
“I think the parents are more excited about it than the kids are,” he said. “They’re just happy school is over.”