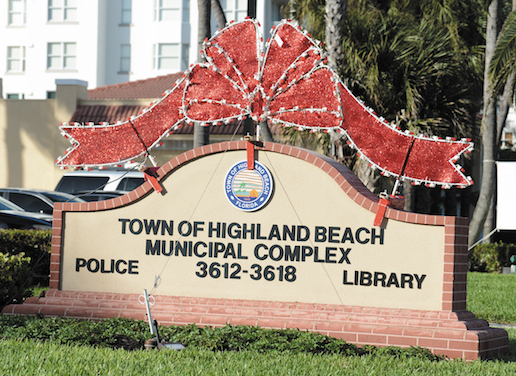 The holidays are bright at Town Hall again this year but not quite as eye-catching since two oversize decorations have been mothballed following concerns that last year’s display was a little over the top.
For the second year in a row, the Highland Beach decorations feature a 25-foot holiday tree surrounded by thousands of lights, a 12-foot menorah and other festive decorations.
Missing from last year are a giant dreidel and a life-size Nativity scene.
“Overall, the concept was that there was a little too much for a small site,” Town Manager Marshall Labadie said.
During a meeting in late September, town commissioners wrestled with scaling back the decorations — which one unhappy resident said made Highland Beach look like Disney World — or abandoning the contract with the outside firm that provides the displays.
“There has to be a happy medium between doing nothing and going over the top,” said Commissioner Evalyn David.
Last year, the town agreed to a four-year lease-to-own agreement in which Highland Beach would pay $25,000 a year for Brandano Displays of Margate to install thousands of lights around the municipal complex, including at the entrances of the Police Department, Fire Department and Town Hall.
The agreement also called for Brandano to put up the artificial Southern pine Christmas tree as well as the menorah, the 7-foot-tall dreidel and a seven-piece Nativity with pieces 6 feet tall.
Commissioner Peggy Gossett-Seidman said she agreed with some residents who felt the oversize decorations were too big for the location in front of Town Hall.
“Having OK’d them on an 8 ½-by-11 piece of paper, you really couldn’t determine how they would look on the site,” she said.
Labadie was able to negotiate an agreement with Brandano this year in which the company would not include the dreidel and Nativity scene and reduce the overall cost by $4,000 a year for this year and the next two years.
Some commissioners felt the reduction of $12,000 on the remaining $75,000 contract was minimal, but Gossett-Seidman said that “getting $12,000 back is enough to make it worthwhile.”
Labadie has pointed out that the contact includes Brandano’s putting up and taking down the remaining displays — including the tree — as well as storage.
The tree, the menorah and the lights will become town property after the 2021 holiday season, he said.
Residents had the opportunity to see the decorations for themselves during the scheduled Dec. 5 Light Up the Holidays celebration, which also honored the town’s 70th anniversary.
Trolley service was planned to once again bring visitors to the annual celebration, which was to include refreshments and a performance by the Dimensional Harmony chorus from Boynton Beach High School.