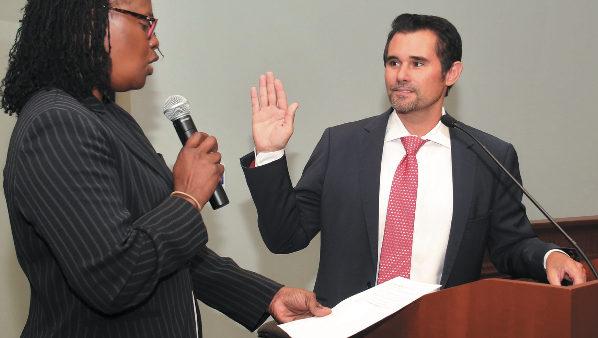 Greg Babij is sworn in to the vice mayor’s job after the Town Commission selected him over Doug Hillman. The term has almost a year to run. Tim Stepien/The Coastal Star

It took more than three hours of interviews, discussion and lobbying by the public, but in the end Highland Beach commissioners managed to appoint Financial Advisory Board Chair Greg Babij to fill a vacant vice mayor seat.

Babij, who applied for the position along with fellow resident Doug Hillman, is the third person to take a commission seat this year, following the December death of Mayor Carl Feldman, the March election defeat of incumbent Commissioner Elyse Riesa and the resignation of Vice Mayor Alysen Africano Nila for health reasons.

“I am excited to have been appointed to the commission,” Babij said. “I look forward to leveraging the collective wisdom of the residents to help us construct well-thought-out, incremental improvements to our town.”

Using a new selection process that was designed by Town Manager Marshall Labadie, Highland Beach sought applications for the open position, screened the candidates and then conducted open interviews during an April 23 meeting.

In accordance with the town charter, commissioners had until April 25 to fill the spot, 30 days from Nila’s resignation, and at one point it appeared a 2-2 deadlock would keep that from happening.

Commissioners Barry Donaldson and Evalyn David — both recent additions to the board — expressed support for Hillman, who has an extensive corporate background and is the president of the Boca Highland Beach Club and Marina.

Town Attorney Glen Torcivia noted that other communities faced with deadlock have tossed coins or drawn straws, but before it came to that, Donaldson broke the tie.

“I honestly don’t want to see this drag on,” he said. “I have very strong feelings but I also know we need to move on with this. I am going to back Greg on this, reluctantly but happily.”

Following the 3-1 vote for Babij, with David the lone no vote, Hillman stepped to the podium. “I want to be the first to congratulate Greg,” he said.

Throughout the interview process and during a community forum sponsored by the Committee to Save Highland Beach, residents and commissioners painted both Babij and Hillman as strong contenders.

“I think we’re lucky to have two very strong candidates,” said resident Fred Rosen, a supporter of Hillman’s. “I hope whoever isn’t chosen will be on the ballot in March.”

Hillman said he might consider running for mayor but said that in the short term, he would apply for the position on the Financial Advisory Board that will come open as Babij moves to the commission.

“I hope to be able to provide some additional insight to the already depth of knowledge that is currently serving on the board,” he said.

During discussions, both Gossett-Seidman and Zelniker said Babij had experience on a town board and was involved with the town in other ways. In addition to his work on the finance committee, Babij is a member of the Highland Beach Police Foundation, on the finance council of St. Lucy Catholic Church and served as the president of his previous homeowner association.

For Gossett-Seidman and Zelniker, Babij’s experience working with town leaders gave him an edge over Hillman, 72, whose executive background included time as president of clothing company London Fog.

“Greg’s involvement in the community is the only difference,” Gossett-Seidman said. “I think Greg has a couple of half-steps ahead in the process.”

David pointed to Hillman’s strength at building teams and helping to create groups that can work together. “Doug has the ability to turn this commission into an exemplary cohesive unit,” she said.

While he said he’s committed to serving on the commission until the next general election in March, Babij said he would wait and see if he wants to run for the position after his term expires — and if he thinks residents would want him back.

“This is a great chance for the residents to get a try-before-you-buy,” he said.