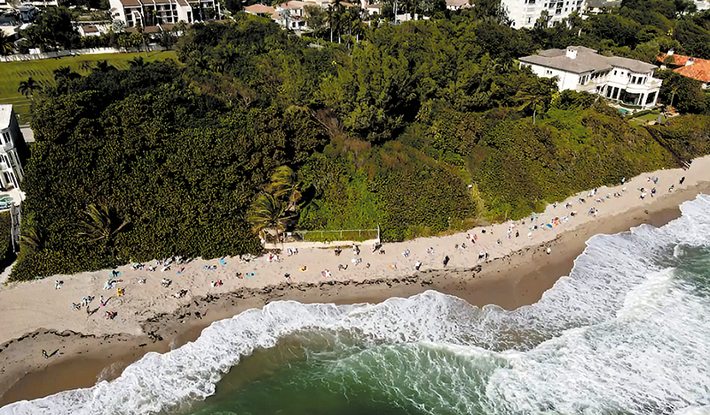 Highland Beach used a drone to take photos of 106 people who turned out at the planned Milani Park near high tide Nov. 18 in an effort to show the county that 42 parking spaces would be enough. The parking area is at upper left. Photo provided

Some came from the south concerned that a county park with parking for 100 cars would create traffic problems.
Others came from the north concerned that a packed beach at the planned Milani Park in Highland Beach would lead to trespassing on neighboring private beaches.
In all 106 people came to a town-sponsored “sit-in” Nov. 18 designed to convince county officials that there isn’t enough room for all the people that a second phase of development — from 42 parking spaces to 100 — would allow.
The idea worked to the satisfaction of town leaders.
While aerial photos show the beach could handle the 100 visitors that town leaders expect would come with phase I, they say the photos also show the beach couldn’t hold the additional 145 visitors who would come with 58 more parking spots proposed for a second phase.
“We saw that with 106 people — without umbrellas and without coolers and without children — there’s barely enough room to accommodate phase I and certainly not enough room for phase II,” said Mayor Doug Hillman.
The presence of turtle nests during seven months of the year would add to the congestion, Hillman said.
“The aerial photos clearly show that phase II will not work,” he said. “Phase II would overpower the beach.”

Following a discussion at the Dec. 1 commission meeting, town leaders plan to set up a meeting with Palm Beach County Parks and Recreation Director Eric Call and possibly county Vice Mayor Robert Weinroth to discuss the finding.
In October, Call said that he is open to working with the town on additional compromises.
“This is just a first brush,” he said after a conception plan for the park was sent to Highland Beach officials. “We want to negotiate further and see if there might be something less intense.”
For more than 30 years Highland Beach residents have been battling the county, hoping to halt development of the Cam D. Milani Park, which encompasses 5.6 acres straddling State Road A1A at the town’s south end.
Sold to Palm Beach County in 1987 by the real estate developer’s family for close to $4 million, the property has been at the center of legal wrangling that resulted in a settlement a decade ago delaying development for up to 10 years.
In October 2019, county commissioners agreed to put off ground breaking for another five years, but asked the parks staff to begin making plans so construction could begin at the end of that period. 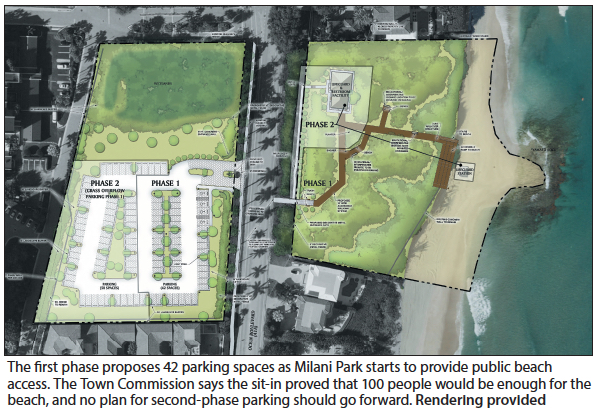 In September town and county leaders came up with a plan for reducing the parking from 125 spots originally approved to the 42 spots. Hillman and other town leaders were surprised when they saw that the second phase of development of the park included an additional 58 spaces.
Using a calculation of 2.5 people per car, town officials estimate there would be about 250 people on the beach if every space were filled. Mayor Doug Hillman directs participants, including Town Manager Marshall Labadie, to spread out along the beach side of the planned Milani Park.

“The beach just can’t handle upwards of 200 people,” Town Manager Marshall Labadie said.
Residents on the beach for the sit-in included people from Parker Highland, the first condominium north of the park site.
“We already have people trespassing on our beach,” said Parker Highland resident Tonya Peer. “It’s going to be a thousand times worse if there’s a park there.”
Other residents say they’re concerned about the impact parking spaces would have on the environment.
“You would have to take away green space,” said town resident Felice Naide.