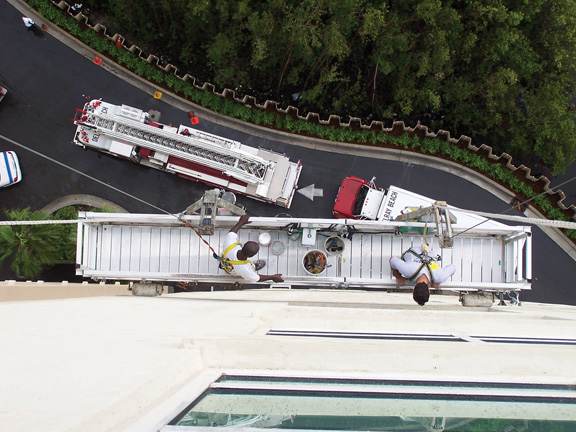 It’s in the shop a lot, and repair bills are mounting. It’s not easy to drive in tight places. And every time it gets back to the station, the life support equipment has to be taken out and plugged into the wall.

Firefighters say it’s time to replace Highland Beach’s 15-year-old ladder truck, but they need voter approval to do so. The truck they want costs $810,000; the Town Charter calls for a referendum on any project priced more than $350,000.

“That vehicle has outlived its usefulness and it should be replaced as soon as possible,’’ Delray Beach Fire-Rescue Chief David C. James warned town commissioners this summer. Highland Beach contracts with Delray Beach for fire and rescue services.

The truck, made by Sutphen, has a 100-foot ladder and is so heavy it sometimes cracks pavers as it approaches high-rises, James said. Its weight limits how close it can get to buildings, he said, making the ladder no better than a much shorter one positioned nearer to the wall.

What’s more, the truck originally was equipped for basic life support. It since has been upgraded to advanced life support but barely has room for all the gear.

“When a call comes out, or whenever they leave the station, the crew personnel must unplug that apparatus and restore it to its position in a compartment that is really quite packed,’’ James said. ‘’It’s not designed to carry all the equipment.’’

If the town borrowed money from its reserves, then paid itself back, the owner of a $500,000 home might pay $32.71 for seven years or $77.27 for three years, Town Manager Dale Sugerman said. Exact financing would be determined next year while the new truck is being built.

The town has about 60 high rises. Mayor Jim Newill wondered how many stories up the shorter ladder would reach. “I have a personal reason for asking that. I live on the ninth floor,’’ he said.

Firefighters said the smaller truck would get closer to buildings, offsetting its shorter reach.

Assistant Chief Russ Accardi said the truck is used not only for fighting fires and providing emergency medical services, but also for special operations. He recalled a rescue the truck assisted in at the Toscana condos when a thunderstorm trapped two workers on scaffolding.

“This storm came out of the south I believe, very rapidly, very high winds,’’ Accardi said. “Suddenly before they can get down or secure their scaffolding, the scaffolding ropes and cables got wrapped around some palm trees and it moved the scaffolding out of position and they were not able to lower to the ground.’’

The proposal to replace the aerial truck had an instant fan on the Town Commission: Vice Mayor Miriam Zwick, who lives in a 16th-floor condo. A recent fall in her apartment left her helpless to move. “Every bone in one side of the neck was broken and the spinal cord was being pinched,’’ she said.
Zwick praised the emergency medical technicians, firefighters and police who responded in minutes and took her to Delray Trauma Center.

“I take this very personally,’’ she said. “And without looking into it deeper, according to the finances et cetera, I would stand up and say, ‘All right, let’s do it — please!’ ” Fire officials want to replace the truck with one like this lighter-weight $810,000 truck.