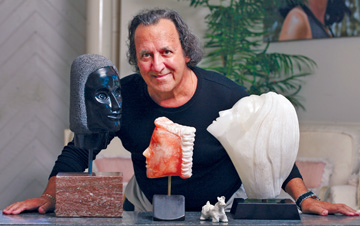 See photos of Kneeling Enchantress as she is carved

When he was finally satisfied with the effort, Joseph Cannizzaro called his wife.

“OK,” he told her, “I’m bringing it home. Get some Grand Marnier and we’ll have a little toast.”

His first sculpture arrived at their Highland Beach home covered by a pillow case.

“It’s a quirky thing,” he explains. “I never wanted my wife to see anything until it was done, so I’d always have an unveiling.”

Cannizzaro placed the draped sculpture on a table, his wife readied the Grand Marnier and — Voilà!

“You did this!” Dolores Cannizzaro gasped.

Her husband, the retired vice president of worldwide marketing for Digital Equipment Corp., and estate agent for Lang Realty, had actually carved a sculpture that was … impressive.

“I was expecting a square or a triangle or something,” Mrs. Cannizzaro admits.

What she got was “Hope,” a female head of translucent white alabaster. Michelangelo’s reputation is secure. Donatello can rest in peace. But Joe Cannizzaro had created something anyone could be proud of.

Five years later, he’s just completed his fifth work, a Kneeling Enchantress carved from a 160-pound block of white marble, and proved once again that retirement can be both an end and a beginning.

For Cannizzaro, that new beginning began in a chance conversation with a fellow diner at the Ruth’s Chris Steakhouse in Boca Raton.

“This woman said, ‘I do stone sculpture at the Boca Raton Museum of Art,’ ” he recalls. “And I thought that’s something I would like to do.”

In 2005, he enrolled in the class, taught by William Reed.

“I didn’t know what I was going to do,” he recalls. “But Willie said just clean it up and see what comes out. It was kind of exhilarating. I think back to the block of stone I started with and what emerged and that really got my juices flowing.”

Next came Contessa, a nude in orange alabaster; then Isis, a head of black Belgian marble and Face, created from a triangle removed from the alabaster block that formed Contessa.

The work is slow and at times exhausting. Once a week, three hours each Thursday, Cannizzaro dons goggles, a dust mask and ear muffs and tackles the stone with chisels and files, a grinding wheel, a pneumatic air hammer.

“I’ve learned to be more patient,” he says, “and coming from a high-stress business environment, I’m not the most patient person. But you don’t want to go too fast. With clay, you can always add another piece of clay, but with this stone, it takes a long time to get to the image.”

His latest creation took two years, and when it was done, Cannizzaro held his now-traditional unveiling. This time, Dolores sent out invitations to about 20 old friends and on March 8, they gathered for drinks and hors d’oeuvres.

Kneeling Enchantress is another nude, with prominent derrière and a waterfall of thick, flowing hair.

He is, Cannizzaro admits, partial to the female form.

“People tease me,” his wife laughs. “They ask if I posed for them. No way!”

All five are home now, on display in his waterfront living room and likely to remain there.

“I don’t think I’ll ever sell them,” he says. “I’ve put too much of my heart into each one of them. Maybe I’d do bronze castings sometime, but I get a little protective.”

He pauses to admire the Kneeling Enchantress.

“I like the way the rear
end came out,” he says.