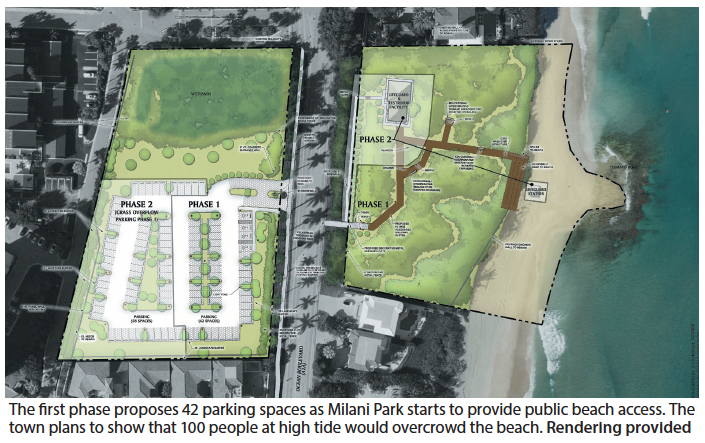 Town plans aerial photo to show how crowded beach would be

A potential compromise in plans for the initial development of the county’s long-disputed Milani Park is gaining traction, while a proposed second phase concerns Highland Beach leaders who say it would bring the beach more visitors than the park can adequately handle.
To prove their point, town commissioners are planning to stage a beach sit-in of sorts, bringing 100 people to the area during high tide for an aerial photograph that they hope will show just how tightly packed beachgoers would be.
The county parks department sent a conceptual drawing to the town in October showing 42 parking spaces in phase one of the park’s development. It showed an additional 58 parking spaces in the second phase, which would take place when additional demand is demonstrated.
While Highland Beach commissioners are willing to accept phase one’s 42 spots, which was a compromise hammered out during September meetings between town and county leaders, they believe the beach portion of the planned park is often too narrow and too short for a large number of beachgoers.
By bringing 100 people to the beach at high tide for the photo, Mayor Doug Hillman — using a calculation of 2.5 people per car — is hoping to demonstrate just how crowded the beach could be with only the initial phase.
“It behooves all of us, including the county, to see just how crowded the beach is at 100 people,” Hillman said. “If the beach can’t even accommodate 100 people, then it demonstrates that one can’t even consider phase two.”
For more than 30 years Highland Beach residents have been battling the county, hoping to halt development of the park, which includes 5.6 acres straddling State Road A1A at the town’s south end.
Sold to Palm Beach County in 1987 by the family of real estate developer Cam D. Milani for close to $4 million, the property has been at the center of legal wrangling that resulted in a settlement a decade ago delaying development for up to 10 years.
In October 2019, county commissioners agreed to put off groundbreaking for five more years but asked the parks staff to begin making plans so construction could begin at the end of that period.
Since then town leaders have been meeting with county Parks and Recreation Director Eric Call — and later with Robert Weinroth, the county’s vice mayor — to come up with a compromise that would minimize the impact the park would have on the area.
That led to the development of the phase one concept, which is modeled after Ocean Ridge Hammock Park, an 8-acre oasis with beach access in Ocean Ridge.
That tentative conceptual plan, which would have to be further detailed and would need County Commission approval, includes a walking path through a wooded area on the east side of A1A that would have educational signs pertaining to the history of the site. The 42 parking spots are on the west side.
The first phase does not include bathrooms, a lifeguard station and a parking attendant station that were in the original development plan, which was approved as part of the settlement. That plan called for a total of 125 parking spaces.
“The original plan is more intensive than what we have in phases one and phase two,” Call said.
The second phase, Call said, includes the bathrooms and a lifeguard station and a lifeguard stand on the beach and the 58 additional parking spaces.
Call said the county bought the property with the intent of providing public beach access and wants to ensure that access is available.
“I think it’s important that taxpayers have access to the ocean,” he said.
Still, he said, enough access to meet demand for many years may be available in the first phase of development. He predicted that expansion in phase two might not be needed for another decade.
“I don’t know if it will be necessary for at least until 2030,” he said.
He said one of the criteria for determining if phase two is needed will be if nearby public beach parks fill up early in the morning.
As part of the settlement agreement, the county is required to charge for parking at Milani Park and Call says there is a plan to have automated parking stations installed. One caveat is the county must charge at the least the same amount as nearby parks, including Spanish River Park in Boca Raton, which is a short distance away.
The cost for those without a city permit is $20 a day. City residents and Greater Boca Raton Beach and Park District residents can purchase a permit for $62 a year. There also are some parking meters on Spanish River Boulevard for $3 an hour.
Spanish River Park, which has amenities such as bathrooms and lifeguards, as well as a wide beach, is attractive to families and sunbathers, while the Milani Park area — which includes Yamato Rock — attracts snorkelers, anglers and surfers.
Call said that he is open to working with Highland Beach to see if there might be ways to work out additional compromises.
“This is just a first brush,” he said. “We want to negotiate further and see if there might be something less intense.”
Town officials are hoping that the aerial photo of 100 people on the beach will play a role in further negotiations and are planning to gather everyone sometime soon.
“I’m sure we’ll find a way to social distance and wear masks,” Town Manager Marshall Labadie said.