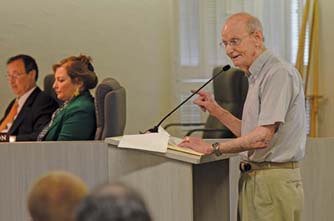 Mike Stein read a letter to the commission in praise of the leadership of library director Mari Suarez.

Hoping to protect the town’s library from what they say is overzealous oversight, dozens of residents packed a Town Commission workshop meeting on Feb. 26 asking commissioners to rein in Town Manager Kathleen Weiser.
“Our town manager’s management approach continues to have a negative impact on our treasured library,” resident Mike Stein wrote in a letter that he read during the meeting.
Stein said the library staff is demoralized and also told commissioners that many residents suspect Weiser’s actions are designed to force out the library’s longtime director Mari Suarez, who has been in her position for 14 years.
Weiser did not speak about the issue during the meeting but afterward disputed those contentions, saying that her goal is to ensure the library operates under the same rules and financial guidelines as other departments.
“The library director has to follow the same rules, regulations and policies as all other department directors,” Weiser said.
After listening to about a half-dozen residents, town commissioners agreed to put the issue on the agenda of its March 25 workshop meeting.
Suarez was not at the meeting and could not be reached for comment before deadline.
The recent uproar is the latest skirmish in what appears to be a continuing battle centered on Weiser’s oversight of the library. In August, Suarez expressed concerns about Weiser’s management style in a letter to the commission, after the town manager reprimanded Suarez for ordering a $500 “drop-in shower” for use by a library custodian without proper authorization. Suarez later ordered the shower be returned.
In their comments to commissioners at the meeting, residents raised questions about the necessity of that reprimand and also about Weiser’s decision to rescind Suarez’s authorization for spending on items under $500. They also questioned Weiser’s decision to take back town credit cards available to library staff.
In her comments after the meeting, Weiser, however, said that library staff can use the credit cards but must first obtain them from the finance department.
“I am a fiscal conservative and I expect that from all of my department heads,” she said.
Residents expressed concerns about Weiser’s performance review of Suarez last May in which the library director received good or satisfactory rating as opposed to the excellent ratings she had received under previous town managers.
Weiser pointed out that prior to the most recent review the town had changed its performance evaluation process to a continuum system without grades.
In the review, Weiser also wrote that Suarez was spending too much time with the Friends of the Library organization, which supports the library in several ways, including raising money for items not included in the library’s budget.
“We find the town manager’s order to spend less time with Friends of the Library the most misguided and counterproductive of all,” Stein wrote in the letter he submitted to the commission. “Friends fundraise on behalf of the library and spend over $20,000 annually for library enhancements.”
Weiser said that her comment was designed to encourage more autonomy for the Friends of the Library and was in no way a reflection on the group’s value.
“They are a wonderful organization that has done so much for our library,” she said.
Stein asked the commission to authorize removal of the letter of reprimand from Suarez’s personnel file, reinstate the $500 spending authority, and return town credit cards to library staff. He also requested that the commission require Weiser to write a letter of apology to the Friends of the Library.
Another resident, Ethel Genes, requested that commissioners consider having Suarez report to a town official other than Weiser.
Stern told commissioners that their actions could have a long-term impact on the library’s future.
“The actions of our new town manager demean our library director and show total disrespect for a department head and a seasoned professional,” Stein said.  “They put the future of our library at risk and are a poor reflection on the commission and the residents of Highland Beach.”