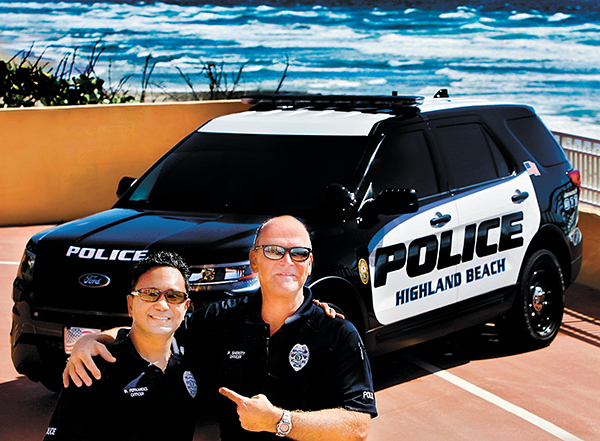 helped rescue four people in a sinking boat on one of their days off. A tow boat arrives to haul in a boat that took on water about a mile off the Boynton Inlet.

Paul Shersty and Dwayne Fernandes had planned a quiet Friday morning fishing on one of their days off last month.
Instead, the Highland Beach police officers ended up saving four people — and four stowaway kittens — in a daring rescue full of surprises.
“I don’t know what we would have done if they weren’t there,” said Richard Bengal, a passenger on the boat owned by his friend Joe Trebbe. “We would have been in serious trouble.”
Shersty and Fernandes arrived about 9 a.m. at a popular fishing spot about a mile off the Boynton Inlet when they heard people shouting and saw waving passengers on a boat about a half mile away.
At first the two thought the people were cheering because they’d caught a big fish, but it became apparent they were in trouble.
As Shersty and Fernandes got closer, they were taken aback to see two men standing in almost a foot of water on the boat. Shersty was also surprised to see Bengal, a friend with whom he had grown up.
On the sinking boat, that wasn’t the only surprise.
As the water rose, Bengal, Trebbe and their rescuers heard meowing under the boat’s console. Soon, four soaked black-and-white kittens, apparently stashed there by their mom while the boat was in storage, emerged.
“They had no idea there were kittens on the boat,” Shersty said.
While the passengers on the boat were panicking, Shersty and Fernandes relied on their police training and experience to remain calm and develop a plan.
Although the seas were only moderately choppy, the waves were big enough to keep Fernandes from getting his boat close enough to pick up the boaters. Instead, they devised a plan to tow the boat to shore while calling for a tow boat designed for similar missions.
The challenge, Shersty said, was to use their small boat to tow one that was getting heavier by the minute as it was taking on more water than could be forced out by a barely functioning bilge pump.
Eventually, the tow boat arrived and took over the rescue operation, taking the stricken boat through the Boynton Inlet with the help of marine patrols from the Boynton Beach Police Department, the Palm Beach County Sheriff’s Office as well as the U.S. Coast Guard.
Shersty, an experienced boater and angler, says he had some doubts the rescue that morning would be successful.
“If any one of several things had gone wrong, the people on the boat would have been swimming,” he said. “I told [Fernandes] they must have had a guardian angel looking after them.”
After the boat reached shore, Boynton Beach police turned the kittens over to Palm Beach County Animal Care and Control.
Shersty said he and Fernandes were just happy to be in the right place at the right time as water came over the transom of Trebbe’s boat and shorted out the electrical system.
“If we had come five minutes later, there would have been nothing there,” Shersty said. “That boat would have sunk.”
He said that the rescue made him decide to double- check the equipment on his own boat.
“I went out and bought two new bilge pumps and a battery,” he said.