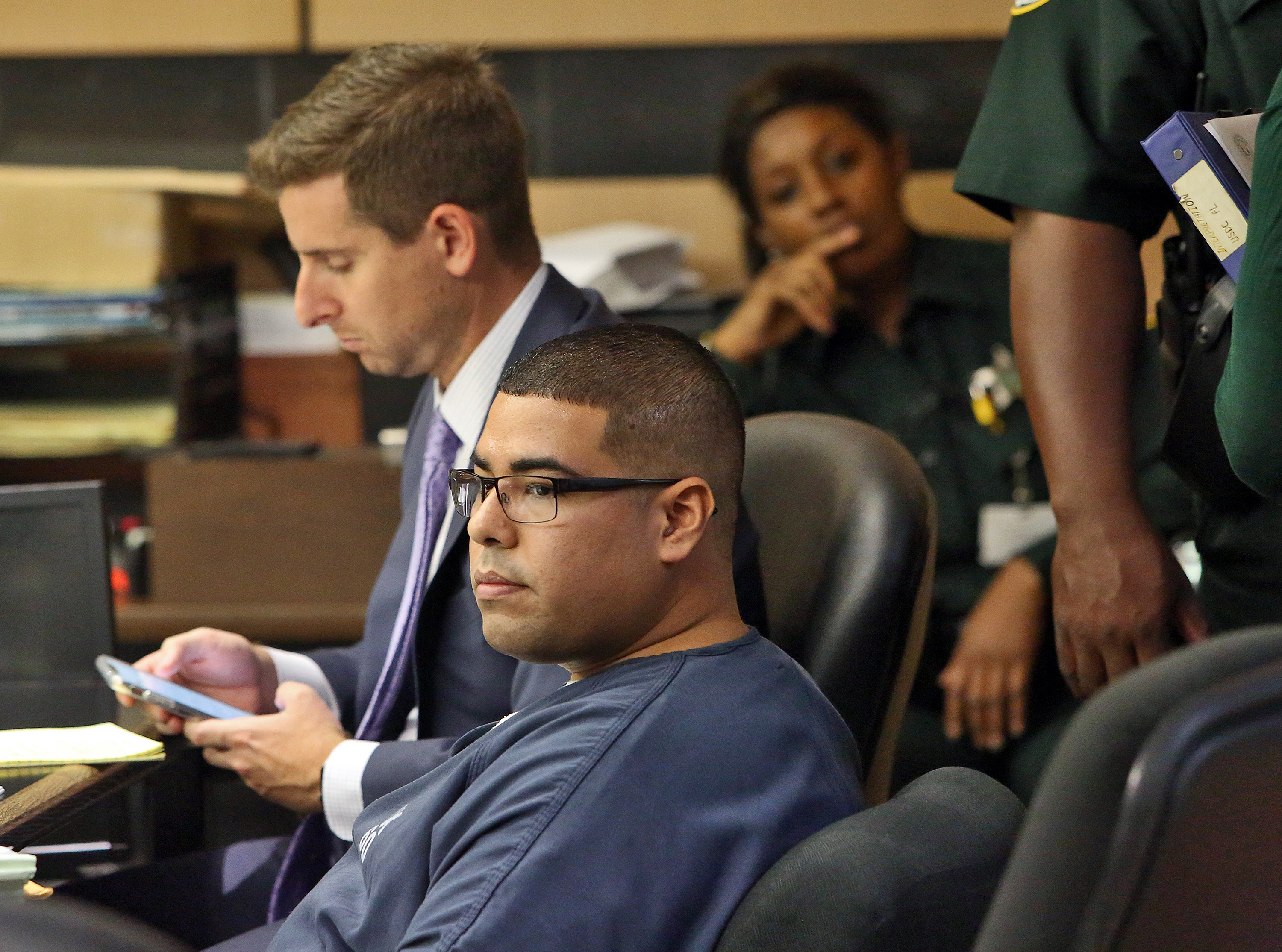 David Del Rio in court with Gregory Salnick, one of his attorneys. Tim Stepien/The Coastal Star

During a bail hearing for Del Rio, who has not been charged in connection with the homicide, prosecutors revealed that someone cut Cabral’s throat while she slept.

Palm Beach County Circuit Judge Glenn Kelley set bail at $463,000 for all 72 counts against Del Rio, who will remain in custody until defense attorneys can prove that any money he might use to post bail wasn’t obtained through unauthorized withdrawals from Cabral’s accounts.

During the hearing, prosecutors argued that Del Rio, 35, befriended Cabral and her husband William and took advantage of their trust to pilfer money from their bank accounts.

Del Rio has been in custody since his arrest in mid-September when he was charged with 27 counts of grand theft, exploitation of the elderly, money laundering and fraudulent use of personal identification information. The additional charges filed Monday stem from new information investigators found in looking at financial records going back to 2013.

Investigator have said in court documents they think Del Rio fraudulently changed the will of Betty and William Cabral, making himself the sole beneficiary of the estate. William Cabral died in April of 2017 at 88.

Fernandes and prosecutor Aleathea McRoberts focused their arguments during Monday’s bail hearing on convincing Kelley that Del Rio was a danger to the community and should have bail set at $1 million. Del Rio’s attorneys asked the judge to set bail between $75,000 and $125,000, claiming Del Rio was neither a flight risk nor someone about whom the community should be concerned.

“As a friend it’s hard for me to believe all this,” said Nick Simpson, who knows Del Rio through their church. “The charges that are being thrown at him are so far outside what I know David to be.”

Salnick argued that Del Rio has known since May that he was under investigation but did not try to flee, instead staying at home in Lehigh Acres is Lee County on Florida’s West Coast with his wife and four children.

In setting the requirements associated with bail that included house arrest for Del Rio and a prohibition against him contacting any members of the Cabral family, Kelley acknowledged that Del Rio would remain in jail while attorneys sort out from where Del Rio would get the money for bail.

Relatives of Betty and William Cabral were also called on to testify, with one great niece saying Betty Cabral was concerned that her money was disappearing.

During her testimony, Maureen Forte said her aunt called her crying early this year because Del Rio told her she no longer had enough money to pay for home health care.

Forte said she reached out to Del Rio asking for a financial accounting of expenses but never heard back, which she said was unusual.

In looking at financial records, detectives could not find evidence that Del Rio used any money from Cabral’s accounts to pay her bills.

“I never found one penny that was paid from Del Rio’s account to care for the Cabrals,” Drake said.