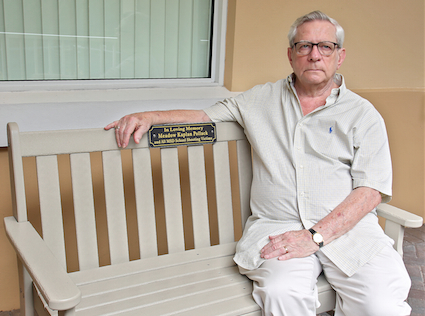 Richard Kaplan says the library bench that remembers his granddaughter Meadow Pollack and the 16 other victims of the shootings at Marjory Stoneman Douglas High helps him focus on fond memories of Meadow. Tim Stepien/The Coastal Star

Richard Kaplan sat pensively outside the Highland Beach Library on Feb. 14. It was the first anniversary of the shootings at Marjory Stoneman Douglas High School, and the bench on which he rested has a bronze plaque with the name of his granddaughter Meadow Pollack and a tribute to the 16 other victims.

“The bench is a place where I can sit and feel close to her,” Kaplan said. “It gives me a place to be with her.”

Tucked away in a corner of the library’s front porch, the bench is a memorial erected by the nonprofit Friends of the Highland Beach Town Library and an individual donor.

Kaplan, who has been on the board of the Friends for many years, also stays in the figurative corner, as does his daughter Shara, Meadow’s mother. One of the few events Shara attended related to the tragedy was a private unveiling of the bench late last year.

It is difficult, Kaplan said, to see the constant reminders of the loss of his granddaughter when he reads stories in daily newspapers.

The anniversary on Valentine’s Day was especially tough. “The whole day was emotional,” he said. “When it happens to you it’s overwhelming, but we do the best we can.”

“I find it a place of calmness and I can direct my thoughts to how wonderful she was in our lives,” he said.

His granddaughter was full of life and loved animals, Kaplan said. “Shara made sure her life was full of love,” he said.

For Kaplan, the library has been a refuge, helping him get through other tragedies — and helping him move forward.

After the death of his first wife, Kaplan went to North Carolina and stayed with another daughter for months as he tried to overcome his grief.

When he returned to Florida, he found himself feeling lost, but ventured to the library and to one of the town’s clubs where he had been a regular.

“The only place I was comfortable was at the philosophy club,” he said.

It was at a club meeting where Kaplan met his second wife, Cynthia.

That the library is welcoming and comforting makes it a truly special place. “There is a lot of loneliness, he said. “Not everyone likes to go home.”