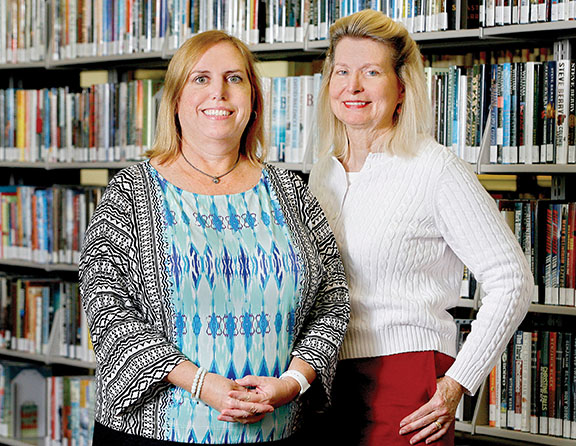 who is stepping down as the director of the library but will stay part time, working 20 hours a week.

Lois Albertson and the Highland Beach Library have been friends for a long time.
Coming to the community for many years to spend time with her grandparents, Albertson would make frequent visits to the small community library then tucked away inside Town Hall.
Albertson — who has a master’s degree in library and information science from the University of South Florida and a master’s degree in information systems technology from George Washington University — moved to South Florida more than a decade ago. She volunteered at the town library one night a week while working full-time for a consortium that provides training and resource sharing services to about 40 South Florida libraries.
In September, she joined the staff of the Highland Beach library as a full-time library assistant. Then late last month she was named as the new library director, following the decision by interim Library Director Suzi Hayes not to take the position full time.
“I’ve always loved libraries and books,” said Albertson, 51, who worked as the staff development director for the South Florida Library Information Network prior to joining the Highland Beach library staff. “I’m very excited about the new position. After many years of coming here and volunteering, this library feels like home.”
Albertson, whose mother, Linda, lives in Highland Beach and actively supports the library, said she looks forward to continuing to meet residents to learn more about how the library can better serve their needs. She also hopes to build on the momentum Hayes brought to the library.
“This library is more than just a place to check out books,” she said. “It’s an important part of the community.”
Hayes is pleased that Albertson was appointed by Town Manager Beverly Brown to be her successor.
“Lois brings strong academic credentials to the job and she has a very service-oriented personality,” Hayes said. “Because of her experience as a volunteer, she already knows most of the operations of the library and she also knows the collection very well.”
Hayes, who became interim library director in June following the unexpected departure of longtime library director Mari Suarez, will go back to working part time at the library this month.
“I had been working part time and I really enjoyed it,” said Hayes, 67, adding that she is looking forward to having more personal time.
Hayes was a library director before coming to Highland Beach and is credited with helping to stabilize the library operations after Suarez left.
“I can never thank her enough for volunteering to become interim director during that time,” said Brown.
During her six months at the helm, Hayes introduced several new programs — including an adult coloring club — and led the effort to automate cataloging, saving about 15 hours of staff time each week.
“I had a wonderful team to work with,” she said. “I really enjoyed my time as interim director.”