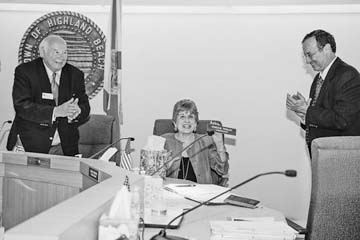 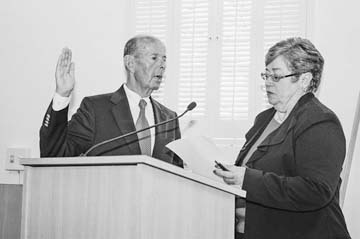 Community activist Carl Feldman defeated Ron Clark in the March 12 Highland Beach municipal election to win a three-year term on the Town Commission.
Feldman, who received 422 votes, 57 percent of the 736 votes cast in the race, replaced Commissioner Doris Trinley, who could not run for re-election because of term limits.
Voters also approved seven minor changes to the town charter, with 395 voters approving the revisions, including clarifications on term limits for elected officials, 395 to 263.
After taking his seat on the commission the day after the election, Feldman praised Clark and reiterated what he said is his commitment to being the voice of town residents.
“Ron Clark is a great guy and I thank him for running a great campaign,” he said. “This was a classic election between two candidates with no mudslinging. It was a campaign with each candidate presenting his platform and the residents making their choice.”
Feldman praised Trinley for her years of service to the town. In addition to serving on the commission since 2007, Trinley had previously served as a deputy town clerk and later town clerk after joining the town staff in 1988.
During a brief meeting following Feldman’s swearing-in ceremony, several commissioners expressed concerns about the wording of the charter revisions on the ballot, which they said was unclear and confusing.
Members of the commission as well as a few residents said they hope there will be improvements in communicating ballot issues in the future.
— Rich Pollack