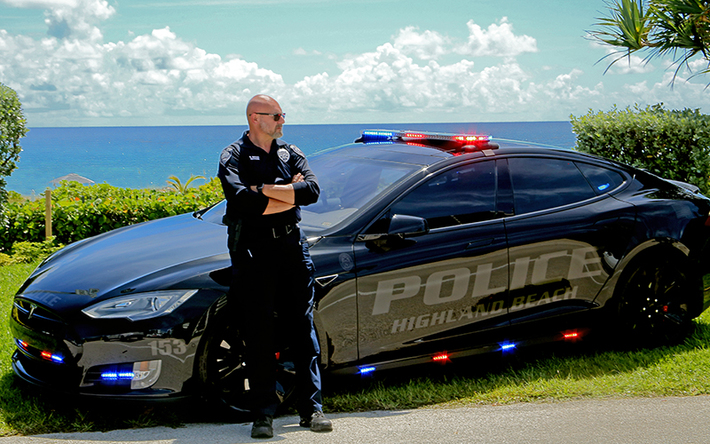 At first glance, the sleek black Tesla blends in easily with other cars and SUVs on State Road A1A.
Take a closer look, however, and you might notice the low-profile light bar attached to the glass roof and the word “Police” painted on the front and sides of the car in gray “ghost lettering” that is difficult to see in daylight but glows at night.
This is Highland Beach’s new Tesla police cruiser, a donated electric vehicle that after a year and a half of research by local police personnel has been transformed into a customized prototype of sorts unlike any other police vehicle in Palm Beach County.
“This is a concept vehicle that we’re able to test and integrate into our existing fleet,” said Highland Beach Police Chief Craig Hartmann. “Having this car as a donation gives us the opportunity to test the functionality of a fully electric car in a police patrol capacity.”
The first-of-its-kind in the county Tesla has a customized police package developed locally and specifically for this vehicle. It has been on the road for about a month in a dry-run capacity to work out bugs and is expected to be tested on 12-hour shifts later this month.
“It doesn’t replace any other vehicle in our fleet, it’s just an extra vehicle at no cost to taxpayers,” Hartmann said, explaining that the car was given by an anonymous donor to the Highland Beach Police Foundation, which in turn gave the car to the Police Department. The foundation provides equipment that is not covered in the town’s budget to the Police Department.
For Highland Beach, a Tesla police car — especially a $90,000-plus car that came as a donation — arrives with a long list of benefits.
An electric vehicle, with a range of about 300 miles per charge, is a good fit for a town that has one main road — A1A — and is only 3.5 miles long with a handful of side streets.
In fact, most of the vehicles in the department’s fleet, which includes Ford SUVs made specifically for police work, are hybrids and have been for years.
The Tesla, however, takes cost savings and environmental friendliness to the next level. It is less expensive to operate than even the hybrids with the cost per mile estimated to be about 50% of the cost of a traditional gas-engine vehicle.
On top of that are the savings that come with significantly lower maintenance costs and downtime.
“There’s very little maintenance,” says Jeff Rubenstein, a Highland Beach reserve police officer who focuses on applying technology to law enforcement and who took the lead in configuring the Tesla for police work. “There’s no oil to change, no engine service needed and it has so many fewer parts.”
Another benefit of the Tesla that works well in Highland Beach is that it is quiet and stealthy.
“If you look at it, you can hardly tell it’s a police car,” Rubenstein said. “It looks like a civilian car until you don’t want it to look like a civilian car.”
Patrolling quiet residential neighborhoods at night, the car can remain all-but-silent and it can sit in a condo parking lot — idling at a lower cost than a gas counterpart — unnoticed by thieves focused on yanking valuables from vehicles.
“It looks like it belongs there,” Rubenstein said. “Nobody is going to think a Tesla is a police car.”
Rubenstein also believes that having an electric patrol vehicle adds depth to the fleet should gasoline become scarce or unavailable.
“Having a Tesla means we can always have a vehicle on the road,” he said.
Although Highland Beach has one of the lowest crime rates in Florida, the Tesla is a capable deterrent on the road. It can quickly catch up to another vehicle with rapid acceleration due to the torque provided by its electric motors.
While other municipalities in Florida have Teslas — Hallandale Beach in Broward County just added 13, most of which will be used by detectives — no others have been customized to the extent that the 2015 Model S in Highland Beach has been.
To turn a standard Model S into a police car meant that radar systems, computer systems and communication systems had to be installed.
To find the right equipment, Rubenstein worked closely with vendors here and nationally and with Tesla.
Because of what Highland Beach is doing, several manufacturers — including Panasonic, Havis, Sound-off and Airgain — agreed to partner with the Police Department and provide their latest state-of-the-art equipment at no charge.
One of the biggest challenges was to make sure electrical power to run all the police equipment was available all the time, since the Model S is designed to shut down power once the driver steps away from the vehicle.
To conquer that, Rubenstein worked with designers and engineers and added a second battery in the car’s trunk to run police equipment that is separate from the Tesla’s operating electrical system.
To address a remaining issue with the Tesla, Highland Beach is trying to acquire a high-speed charger that can get the batteries up to capacity while an officer is on his lunch or dinner break or in the station doing a report, Hartmann said.
In the interim, the car is charged overnight by Reserve Officer Gerry Riccio, who has been test-driving the Tesla before it goes on patrol.
He’s noticed, not surprisingly, that heads turn when people see the car.
“One of the first times I was driving it, a lady in a white Tesla pulled up to me and said, ‘I can’t believe it’s a Tesla police car,’” Riccio said.