Attorneys for David Del Rio, the financial adviser accused of siphoning nearly $900,000 from the accounts of a Highland Beach widow who was later found slain, will be in court this month hoping to get him released on bail. 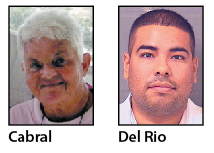 Del Rio, who served as the financial adviser to Elizabeth Cabral, 85, has been in custody since mid-September after being charged with 27 counts of grand theft and financial fraud stemming from what detectives say were unauthorized withdrawals from the woman’s bank accounts.
“It’s very clear that he’s entitled to bond,” defense attorney Michael Salnick said. “He’s never been in trouble before.”
Although bail was originally set for $27,000 soon after his arrest, Del Rio remains in jail following contentions by prosecutors that any money used to post bail would be from ill-gotten gains. Prosecutors also contended that Del Rio was a flight risk, something Salnick says is not the case.
In court documents, prosecutors argued that “to allow the defendant to use funds and collateral that were obtained by his participation in an organized criminal scheme to defraud in order to secure his release is contrary to the purpose and intent of the statues.”

Salnick said he will argue that the money Del Rio, 35, will use to post bail is not connected to the charges. He also said Del Rio knew for months that he was under investigation by Palm Beach County Sheriff’s Office detectives but did not flee.
The attorney pointed out that law enforcement has seized Del Rio’s passport. He said that if Del Rio is released on bail, he would return to his home in Lee County and to his family.
“My client is going to do the right thing and show up for court when required,” Salnick said.
While in Palm Beach County Sheriff’s Office custody, Del Rio has frequently been visited by his wife, his parents and other family members.
“He has a very strong support base,” Salnick said.
While investigators have been tight-lipped about their investigation into Cabral’s death — she was found in her apartment in late April — Salnick denied any link between his client and the homicide.
“He’s unequivocally not involved in the homicide,” Salnick said.