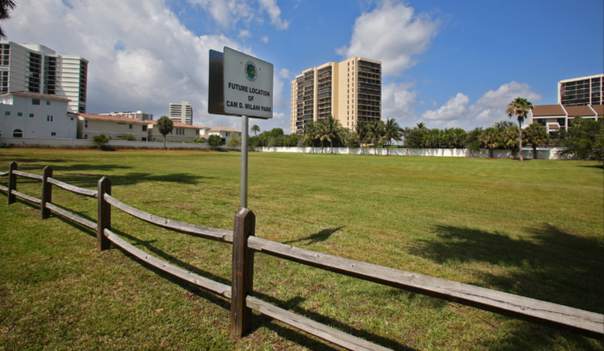 Lucia Milani sold the property to the county years ago with the intent that it would become a park as a way to honor her late husband. Tim Stepien/The Coastal Star

The weathered sign at the south end of Highland Beach proclaiming an almost 6-acre parcel as the future home of Cam D. Milani Park is likely to be there for five more years if county commissioners follow the recommendation of their parks and recreation director.

The site has been the centerpiece of legal tangling since the county purchased it in 1987, with Highland Beach residents objecting to a park in their community open to all county residents and county officials saying such a park is needed.

Under a settlement signed in 2010 to end a legal battle, county commissioners have until the end of this month to let Highland Beach know whether they want to begin developing the park — which includes 352 feet of beachfront on the east as well as open green space on the west side of State Road A1A — or postpone any decision.

County Parks and Recreation Director Eric Call said he has told the county administrator that there’s no need to rush to construction.

“Our recommendation to Verdenia Baker is to extend the agreement for another five years,” he said.

Before Highland Beach residents who oppose development of the property can jump for joy, the recommendation still has to receive the approval of the County Commission.

“This is very good news for Boca Highland if the County Commission agrees to follow the recommendation of its parks and recreation director,” said Doug Hillman, president of Boca Highland Beach Club and Marina, which borders what has been planned to be a 100-car parking lot. “There is no need to spend county money that’s needed for initiatives that clearly should take priority over this small venture.”

County Commissioner Robert Weinroth, whose district includes Highland Beach, said he is likely to vote for the five-year extension to keep the parcels the way they are.

At the same time, however, he wants to see the county begin developing plans so the project is ready to go forward in five years rather than approve another five-year extension, which would be the final extension allowed under the 2010 agreement.

“We’re certainly not going to put a shovel in the ground tomorrow,” he said. “I would like to see us working now before five years is up so we know what’s needed.”

Weinroth said he received a letter from Lucia Milani, who sold the property in hopes of its becoming a park honoring her late husband.

“We need to fulfill our promise to the Milani family,” he said. “We don’t want to lose this opportunity.”

Should the county decide not to develop the park and instead sell the property, the Milani family would have the right of first refusal under the 2010 agreement.

Call, the parks and recreation director, and Hillman of Boca Highland say there is no need to build a beachfront park at the site right now.

Both point to Boca Raton’s Spanish River Park, which is a short distance south of the Milani Park property, as an alternative for those who want to go to the beach.

The county is currently below that standard, but that could change in the next five years as western areas continue to grow. “The population hasn’t grown in numbers to the point where an additional beach park is needed,” he said.