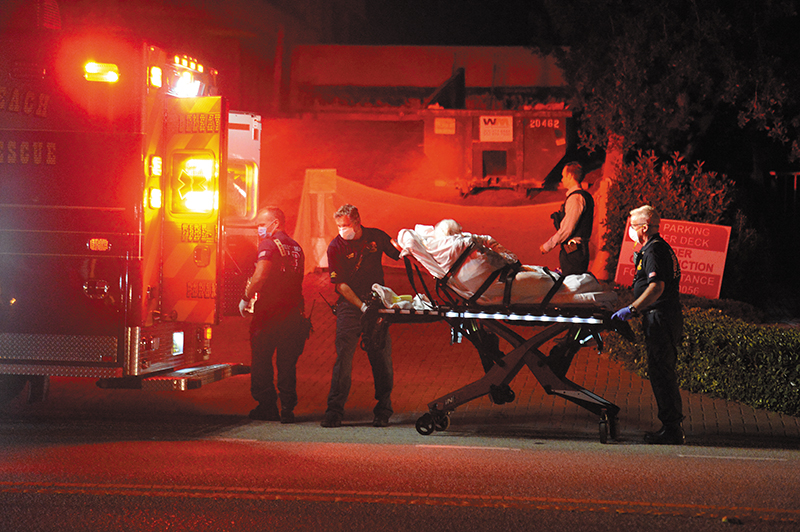 Delray Beach paramedics remove the grandmother of the suspect from the condo about four hours after the standoff with police started. Since she has mobility issues, she was transported to a safe location. Jerry Lower/The Coastal Star

A standoff between police and a 37-year-old man armed with a gun and holed up in a Highland Beach condo closed off large sections of State Road A1A for several hours, while police ensured the safe release of three others held in the apartment.
In the June 24 incident, Jacob Geller barricaded himself in a room while police and medical personnel escorted his grandparents and a health care aide to safety.

Geller was arrested the next day, following negotiations with sheriff’s detectives, and charged with false imprisonment while armed with a firearm.
“The incident ended safely with nobody injured,” said Highland Beach Police Chief Craig Hartmann.
The standoff, which involved police from Highland Beach, Delray Beach and Boca Raton, began shortly after 4 p.m., when police got a call from the daughter of the aide who was in the apartment in the 39-unit Villa Mare condominium at 3211 S. Ocean Blvd.
The daughter, according to court records, said she was contacted by her mother, who was in fear for her safety after Geller pointed a rifle at her while he was arguing with his mother.
During the argument, Geller’s mother tried to make a call, but Geller used the rifle to knock the phone out of her hand.
The mother, who owns the unit and lives with the older adults, was able to leave the apartment while police tried to reach Geller by phone.
Highland Beach police, after assessing the situation, determined that additional resources were needed and reached out to both Delray Beach and Boca Raton police.
Police on the scene learned that Geller had locked himself in a room, enabling them to safely remove the grandparents and the aide from the apartment, leaving Geller — who refused to speak with the police — inside.
Hartmann said police determined that Geller was no longer a threat and agreed to avoid using force to remove him.
“We determined that the best way to end this safely was to discontinue contact with the suspect,” Hartmann said.
Geller remained in the apartment overnight but police and sheriff’s detectives, armed with an arrest warrant, returned the next evening and talked Geller into safely surrendering.
In addition to filing charges, police have asked a judge to issue an order preventing Geller from having access to firearms for up to a year.