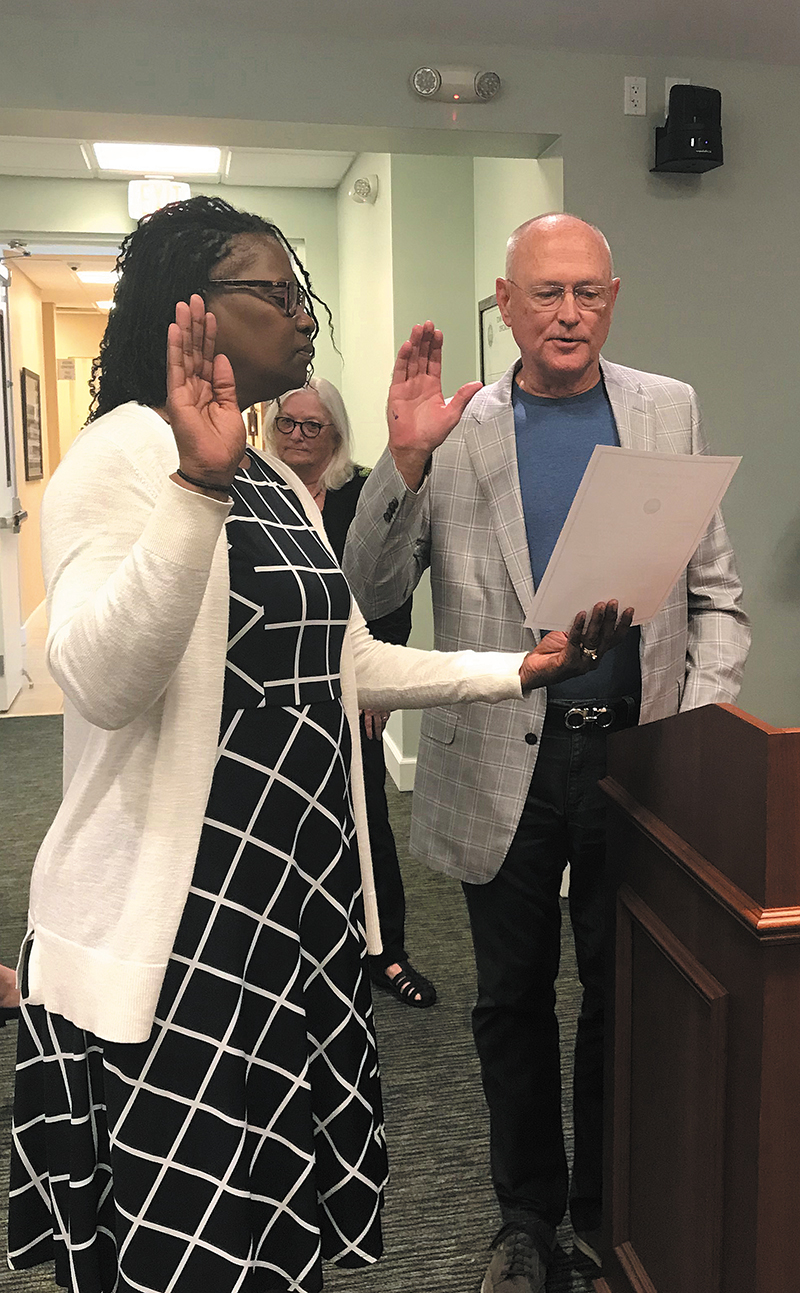 New Commissioner Barry Donaldson is sworn in by Town Clerk Lanelda Gaskins after his appointment to serve for the next year. Rich Pollack/The Coastal Star

Highland Beach has a new mayor and a new town commissioner.

Zelniker, 72, who was first appointed to the Highland Beach Town Commission in January 2015 and is the longest-serving member of the board, will fill the one year left in Feldman’s three-year term.

Following the appointment of Zelniker, commissioners chose architect Barry Donaldson to fill the one year remaining in Zelniker’s term.

Donaldson, who has served as chair of the Board of Adjustment and Appeals and served on the Planning Board, ran unsuccessfully against Zelniker for the seat in 2017.

Zelniker said she agreed to support Donaldson to fill the position because of his continued involvement.

“I felt he earned it because he remained active in the town,” she said.

Donaldson, 69, said he agreed to take the position so he could continue to support initiatives he thinks will benefit the town.

“I saw it as an opportunity to be directly involved in issues that are important,” he said.

Among those issues are the overall appearance of Highland Beach and fixing the street flooding that occurs following heavy rains.

“These are all elements I  talked about during the 2017 campaign,” he said.

Donaldson and Zelniker support the Ocean Walk and More project, funding for which will come before the voters next month.

Zelniker said her priorities as mayor will be to continue bringing civility to the commission as well as to ensure that the town is well prepared for the future.

“I’m passionate about civility and that we agree to disagree,” she said.

Known as an elected official who listens to residents, Zelniker said she wants to continue to make town leaders accessible to residents.

Rather than follow the tradition of hosting residents in “Coffee with the Mayor,” Zelniker said, she would like all elected officials and town department heads to attend.

“I want to bring people together,” she said.

Donaldson won the seat, three votes to one, with the single vote going to Planning Board Chair David Axelrod, who didn’t appear to be seeking the appointment.

Commissioners also did not agree unanimously with the timing of Donaldson’s appointment immediately following Zelniker’s elevation to mayor. Gossett-Seidman wanted to hold off on the appointment until other residents had an opportunity to express interest.

“I would just feel better if we waited until the next meeting,” she said. “Maybe there’s a fantastic person out there. I just don’t see the harm in waiting.”

Gossett-Seidman then cast a ballot for Axelrod.

Zelniker and her husband, Marvin, have been Highland Beach residents since 2001. She was recently re-elected president of Regency Highland Condo Association and has been on her condo board since 2005. Prior to serving on the commission, Zelniker worked on the Beaches and Shores Advisory Board.

Donaldson, who moved to Boca Raton from Kentucky for work in 1982 and moved to Highland Beach in 2002, continues to work as an architect. He served on the town’s special committee to evaluate solid waste proposals, and he and his wife, Marlynn, are active volunteers for the Friends of the Library.

Both Zelniker and Donaldson said it is too early to determine whether they will run for their seats in 2020 when their terms expire.