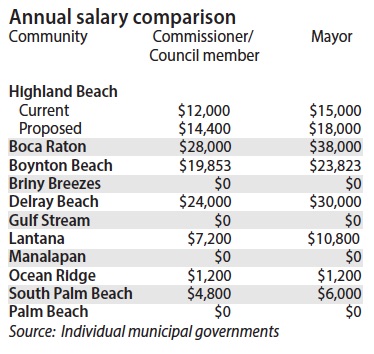 Saying they want to send a message that what they do is a job and not a hobby, Highland Beach town commissioners are moving ahead with plans to increase their salaries by 20% and add an annual cost-of-living increase.
In approving a recommendation from the town’s Financial Advisory Board, which noted that the commission salaries had not been raised since 2004, commissioners instructed staff to move forward with an ordinance that would increase commissioner salaries by $2,400 and the mayor’s salary by $3,000.
Highland Beach commissioners are currently paid $12,000 and the mayor, who is a voting member of the commission, is paid $15,000. Those are the highest salaries for commissioners and a mayor of coastal towns from Palm Beach south, with several of the small towns offering no financial incentive to elected officials.
While agreeing that the increase is necessary, commissioners say the move isn’t about the money but instead is about recognition for the work and responsibility that come with the job.
“If there was no compensation all five of us would still be here,” Mayor Doug Hillman said. “Still, 17 years is too far for a commission to go without a raise.”
In discussing the issue during a meeting last month, commissioners said that the increases will help ensure that people who might consider running for a town office know that a lot of work comes with the position.
“We have to look down the road and make sure people in the future understand that this is a job and it’s generally more work than you think it’s going to be,” Commissioner Evalyn David said. “The salary and the increase send a message that this is a job, it’s not just sitting here. This is work and if it wasn’t work, we wouldn’t be paid for it.”
In supporting the change, Vice Mayor Natasha Moore said that the increase will help attract qualified candidates for the job in the future and could affect how current elected officials see their roles.
“I think by paying a little more we might continue to attract expertise,” she said. “I think that is really important.”
The increase, she said, can also send a message to the incumbents.
“It elevates the expectation of ourselves,” she said. “The town has increased our salaries so we better continue to take this seriously, do our homework and come prepared.”
Acknowledging the awkwardness of commissioners giving themselves a raise, Moore voiced support for the annual cost-of-living increase, based on the Consumer Price Index, which she believes will eliminate the need for future commissions to go through a similar process.
While the commission appears unanimous in its support for an increase, the recommendation from the Financial Advisory Board came on a 4-1 vote with Dr. Richard Greenwald dissenting.
“Philosophically, my feeling is to keep it the way it is,” he said. “The salaries they currently have are commensurate with the size of both the town’s population and its budget.”
Others on the board, however, advocated increasing the salaries even more than the 20% recommended by the panel’s chairman, David Stern.
The advisory board’s vote in support of the increase, Hillman said, is recognition that can have a positive impact on people receiving the increase.
“Being recognized for what you do is motivational,” the mayor said.