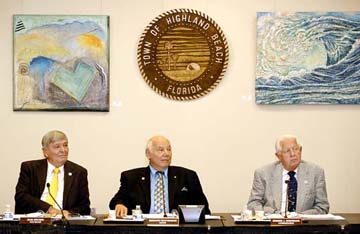 listen to a presentation on the town’s spending cap.

In the wake of a finding by the Palm Beach County Inspector General’s Office, Highland Beach town commissioners have agreed to undo an ordinance giving the commission the authority to spend more than $1 million on an individual project without voter approval.
Approved on first reading by the Town Commission this month, a new ordinance nullifies legislation passed in 2012 raising the spending limit to one-tenth of the town’s operating budget, or about $1.1 million.
If passed on second reading next month, the new law will require a referendum on any project with a price tag exceeding $350,000.
The commission, in tentatively restoring the $350,000 spending cap set in 1991, is following the recommendations coming from the office of Palm Beach County Inspector General John Carey.
Responding to a complaint from an unidentified resident, the IG office determined that the town violated state law in 2012 when it passed the ordinance raising the limit. By law, the report said, the town could only raise the cap through a referendum.
The ruling also called into question the decision by the Town Commission to fund an $850,000 police department and commission chambers renovation project that is currently underway.
“Because the increased funding limitation provision was never approved by public referendum, initiating the project violated the town’s charter,” the report said.
In meeting with town officials, representatives of the IG’s office recommended, however, that the town continue with the renovations, according to Town Attorney Glen Torcivia.
The inspector general also concluded that there was no criminal wrongdoing in the matter.
The report has launched a firestorm of public outcry from some residents asking for resignations from Torcivia and Town Manager Kathleen Weiser, who they say should have known that the 1991 spending cap could only have been changed by referendum.
At the same time, the report has caused a backlash from another group of residents who believe others have gone too far in their criticisms.
Among those expressing outrage over the town’s decision to fund Town Hall renovations was resident Gerald Block, who recently sent a letter to commissioners.
“Over $900,000 was spent on renovations of Town Hall when the spending limit without approval by referendum was $350,000,” Block wrote. “This was an illegal act and should be punishable.”
Others have spoken out in agreement with Block.
“The bottom line is any violation of the law and misappropriation of funds requires accountability,” said resident Bill Weitz.
During a recent commission meeting, Commissioner Carl Feldman echoed the feelings of some residents and asked for resignations from Torcivia and Weiser, but there was no further discussion and no action was taken.
Both Torcivia and Weiser have said that the oversight was the result of an honest mistake during the researching of records related to the issue.
Torcivia said his office repeatedly asked for records from the town clerk’s office to be sure that spending cap could be increased by ordinance and received nothing to indicate otherwise.
Weiser, during a recent meeting, told commissioners that she was prohibited by state law from getting involved in the researching of records, with that responsibility designated by law to the town clerk’s
office.
“The suggestion that I or the attorney should be involved in records is wrong,” she said. “I cannot do that, it’s against the law.”
While many residents were critical of the actions of the commission and of Weiser and Torcivia, others spoke out in support of their actions.
“We have a handful of people who come to these meetings and they have an agenda,” said resident Linda Albertson. “People would be appalled if they heard some of the things that were said today. I just want to go on record to say to the people who have been accused that there are a lot of people behind you.”