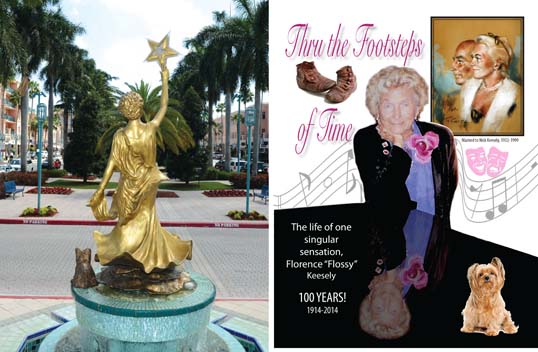 The book of a lifetime – the life of Boca Raton philanthropist and community activist Florence A. “Flossy” Keesely — will soon be available.

The memoir that’s been more than a year in the making, will be unveiled on Keesely’s 100th birthday April 18, in front of the statue/fountain she donated to Mizner Park.

Proceeds will be donated to Flossy’s Dream Foundation scholarships.

Keesely has been a member of the Rotary Club since 2011.

The book is called “Thru the Footsteps of Time,” and traces her life from her youth in Philadelphia through her 67-year marriage to Nicholas “Nick” Keesely and the years following his death during which she continued to contribute to the community and many charitable organizations.  She organized and sponsored five “Pathway to the Stars” concerts at Mizner Park from 2009 to 2013.

“Thru the Footsteps of Time” was written by Dale King and his wife, Julia Hebert. Document research was done by Bettie McMillan. The book was designed by Scott Simmons and published by Jerry Lower of The Coastal Star. Information and the collection of photos for the book were provided by Flossy Keesely.