Highland Beach resident Barry Axelrod was relaxing on his dock overlooking the Intracoastal Waterway on the last Sunday in April as boat after boat sped past on the way south to the annual Boca Bash celebration.
“It was the scariest thing,” Axelrod said. “They were going really fast and they were going wherever they saw an opening to get around other boats.”
Axelrod watched as the recklessness continued for about an hour and a half and then witnessed a dramatic shift. “All of a sudden everything calmed down,” he said.
Looking to his left, Axelrod saw the reason for the change: Highland Beach’s new police boat was heading his way and boaters were taking notice.
“I’m thinking, ‘Thank God we have that boat,’” he said.
Since its launch in early March, the town’s $164,000 police boat, with Officer Nathania Lai at the helm, has been doing what it did that Sunday — slowing boaters down on the Intracoastal between the Linton Boulevard and the Spanish River Boulevard bridges just by being there.
“Our goal from the start was to make this stretch of the waterway safer for everyone who uses it,” said Highland Beach Police Chief Craig Hartmann. “We’re seeing that happen as a result of our presence and our visibility.”
Though the marine unit is still in development, with other officers being trained and maintenance issues being worked out, people with views of the Intracoastal say they’ve noticed a dramatic change even on days when not a lot of boats are on the water.
“We have already seen a difference,” said Alan Croce, a resident of Penthouse Highlands. He and a couple of dozen fellow residents met with Lai and other officers to learn more about the department’s waterway safety efforts.
“As time goes on and the knowledge that there’s a police boat out there grows, we do expect people to slow down even more and to operate their boats safely and with respect to others,” Croce said.
Lai and the police boat were on the water the Saturday before Boca Bash — a party on Lake Boca Raton that drew scores of boats — keeping an eye out to ensure boaters were observing the speed limit, which until the end of May is 25 miles per hour. The speed limit increases to 30 mph from June 1 to Sept. 30.
Heading north, Lai pointed a radar gun at a vessel coming her way that looked from a distance to be moving at a pretty fast clip. The radar, however, told a different story and showed that the boater was observing the speed limit.
“When other boaters see us, they mostly slow down,” said Lai, who spent a few years as a sergeant in the Miami Police Department’s marine unit and worked as a reserve officer in Broward County’s Lighthouse Point before coming to Highland Beach.
On this day, Lai reminded at least one person on a jet ski and a few boaters of the speed limit by motioning for them to take it a little easier on the throttle or by holding up two fingers in one hand and five in the other.
Highland Beach police had not written any boating citations as of late April, but Lai on several occasions had stopped boats for speeding, usually with the focus on educating the boaters about the need to slow down. She also had stopped boats for routine safety checks if something caught her eye.
“We’re focusing on making our presence known and on educating other boaters,” she said. Lai uses radar if it looks like boats are going too fast. She also makes hand signals that tell boaters to ease up.

FWC citations are up
Highland Beach is not the only law enforcement agency to have a presence in the area, with officers from the Florida Fish and Wildlife Conservation Commission and marine units from Boca Raton and now Delray Beach also around.
Delray Beach police recently formed a new marine unit that includes 12 part-time officers and two sergeants. The unit has two boats, both of which were in the water during the Sunday of Boca Bash, according to a department spokesman.
Since the beginning of the year, several boaters navigating the stretch of Intracoastal Waterway along Highland Beach have been stopped by FWC officers.
According to FWC records, six citations and 11 warnings were issued in the area in a little more than the first three months of this year compared with two citations and nine warnings issued in all of 2021.
State Rep. Mike Caruso said that the FWC now has a patrol boat based in the area and has installed radar to collect data on the speed of boats coming through.
Those actions come following two fatal boating crashes in the area within the last year.
In August, 37-year-old Samantha Esposito of West Palm Beach died after the northbound center-console boat she was in crashed into a sea wall, ejecting her and six others, including three children.
Then on Jan. 15, 63-year-old Richard Mineo of Delray Beach was killed when the center-console boat he was piloting hit a wake and went airborne before crashing into pilings and eventually hitting a nearby docked boat. Mineo was thrown from the boat, as were two boys onboard. The boys were pulled from the water and treated by paramedics before being taken to a trauma center.
Both crashes are under review by the FWC, which is not releasing details of either crash pending completion of the investigations.
Initial reports indicate that a combination of large wakes and speed may have been contributing factors in both cases. Another deterrent is a radar sign at the south end of town designed to catch the eyes of northbound boaters. Residents say the measures have worked after two fatal wrecks on the waterway since last August.

New sign displays speeds
Highland Beach commissioners agreed to create a marine unit and spend $164,000 on a new boat late last year following the first crash.
In addition to having the boat on the water, Highland Beach police have installed a speed limit radar sign on the dock of Boca Highland Beach Club and Marina at the south end of the town.
Similar to signs on land that register motorists’ speeds, the sign on the water lets boaters know what the Intracoastal speed limit is and whether they’re exceeding it. Hartmann said the town hopes to install a similar sign at the north end of town.
Mark Herman, a Boca Highland resident and boater, says the sign gets the attention of boaters coming north from Boca Raton. They have slowed down as required as they pass under the Spanish River bridge but then speed up as they enter the waters by Highland Beach.
“You may not know how fast you’re going but that radar sign makes you more aware,” Herman said.
The sign, the town’s police boat and the presence of other law enforcement agencies all appear to be making an impact, along with Highland Beach police efforts to make people aware of the stepped-up efforts. 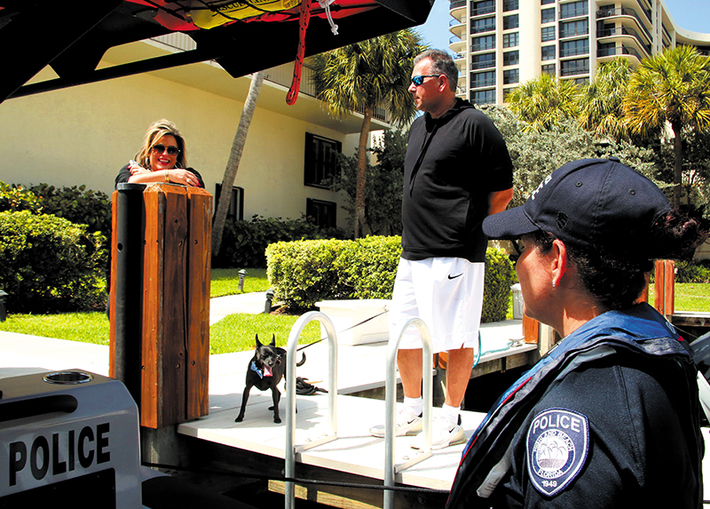 Lai speaks with Boca Highland residents Mark and Vicki Herman, with their dog Bolo, as she docks the town’s marine patrol vessel.

‘Really calmed down’
Like Axelrod, town Commissioner Peggy Gossett-Seidman said she was surprised by the dramatic change from previous years of the Boca Bash.
“This is the first time in 31 years that boats weren’t speeding coming back in the afternoon,” said Gossett-Seidman, whose backyard faces the water. “There were remarkably lower speeds.”
Gossett-Seidman says she has noticed a change even when the police boat isn’t patrolling.
“There are several boating websites and I’ve heard that the word is out about Highland Beach,” she said. “Everything has really calmed down.”