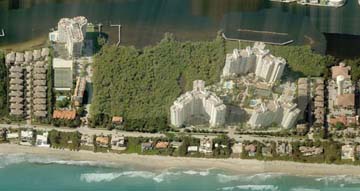 If approved, the new condo would be built where mangroves stand

between Regency Highland (left) and the three towers of Toscana on the right.

A developer’s request for permission to build a 209-foot-tall, 16-story luxury condominium with 45 units on one of Highland Beach’s last vacant parcels — despite a 35-foot height limit — is drawing concerns from residents who fear it will disrupt the tranquility of the small town.
In a request to the town’s board of adjustment and appeals, representatives of Golden City Highland Beach, LLC, are asking for a variance from the town’s maximum building height restriction of 35 feet, claiming special circumstance exist with the 7.35-acre parcel they own at 3614 S. Ocean Blvd.
In a letter to the town, attorney Nathan Nason said the property is primarily wetlands and that only about 10 percent of the parcel is usable for development of a building.
“With the current buildable area, only eight units would be permitted,” the attorney wrote. “Eight units on a 7.35-acre parcel is approximately one unit per acre. That is an unreasonable restriction on the development of the property.”
Nason said that the property is surrounded by condominiums that are taller than the current height limit.
“Directly to the north, the Toscana condominium is a luxury residential development with three 17-story condominium towers,” according to the letter. “Further, to the south, there is a 14-story condominium along the Intracoastal Waterway.”
Toscana, according to records, was only built after years of lawsuits and legal wrangling over the height issue. In that case, courts found that the height restriction did not apply because it was imposed after the then owner had acquired the property.
During a recent Town Commission meeting, Toscana resident Marny Glasser, acknowledged that there are indeed tall buildings along A1A, but said that an additional building would only create more congestion and disrupt the peaceful nature of Highland Beach.
“Toscana is a wonderful place to live but in retrospect maybe it shouldn’t have been built,” she said. “But that was in the past, what’s here is here. The town doesn’t need another large building.”
Glasser, who serves as secretary of Toscana West, said she is also concerned about the impact the project will have on endangered wildlife that use the dense mangroves on the property as shelter.
“This is the last sanctuary we have for wildlife,” she said, adding that she has seen a variety of birds as well as manatees and other species in the area. “There’s no place else for them to go.”
Nason countered, saying that plans for the project call for most of the mangroves on the property to be preserved.
“We will be impacting a small amount of the mangroves,” he said.
In urging the commission to deny a variance for the property, Glasser said that the height restrictions were in place when the current developer bought the property.
“The new owner knew, or should have known, what the town code is when they bought the property,” she said.
Under the developers’ plans, the 16-story building would include parking on the first and second floors, a pool and two units on the third floor and four units each on floors four through 13. The 14th floor would have two units while the 15th floor would be the penthouse. The top floor, according to Nason’s letter, would be a roof dedicated to mechanical and electronics equipment.
“The building will be designed to minimize the impacts to views and other potential impacts to the neighboring properties,” Nason said in his letter.
He said that the developer’s representatives have met with Toscana residents and are listening to their concerns.
The request for a variance will be considered by the town’s board of adjustment and appeals, which will make a recommendation to the Town Commission. No date has been set yet for the issue to come before the advisory board.