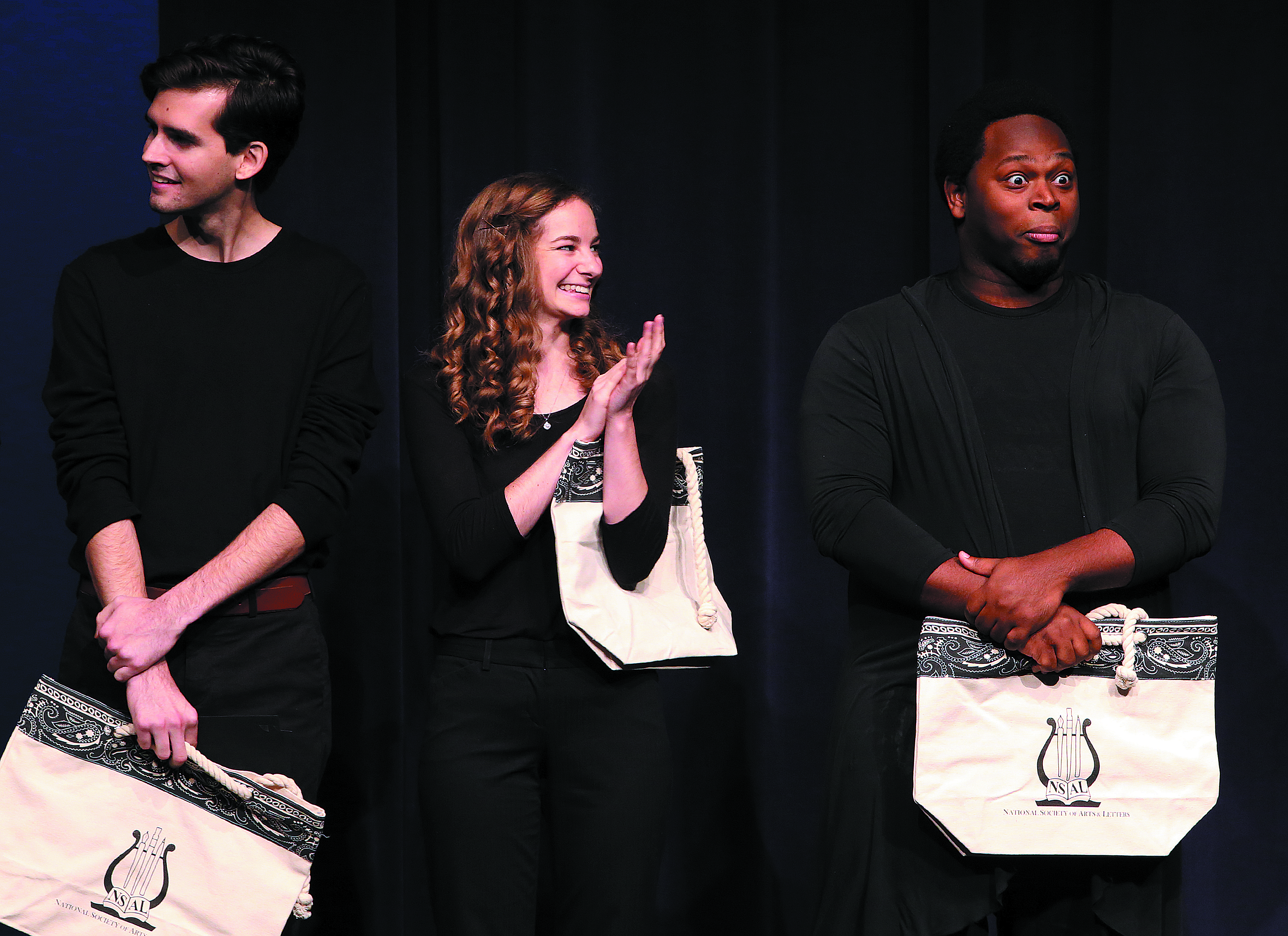 Darius J. Manuel (right) reacts as he is awarded top prize in the National Society of Arts and Letters' regional drama contest at the Crest Theatre. He earned a spot in the national competition. With him are Joshua Hernandez, who placed third, and Aletta Kemp. Tim Stepien/The Coastal Star

One at a time they will step from behind the curtain and stand center stage at the Crest Theatre in Old School Square.

They have names, but the trio of judges in the front row won’t know them.

They are from Boynton Beach and Delray Beach, Boca Raton, Fort Lauderdale and Miami, but the judges won’t know where they live.

All the judges will know for sure on this Saturday morning, March 9, is that each of them has a dream.

They have no costumes, no sets, no music, and when they are done, they will have no applause.

All they have is a chair, two brief monologues and eight short minutes with which to attempt to win one of the top three spots in the Florida East Coast Chapter awards for the National Society of Arts and Letters 2019 Drama Competition.

The other nine will go home with no prizes.

“But it’s wonderful whether they win or lose, because they make connections that can last a lifetime,” says Judi Asselta, president of the Florida East Coast Chapter, one of 17 chapters nationally.

Founded in 1944, the NSAL sponsors competitions and scholarships in the visual arts, dance, literature, music, musical theater and drama.

The local chapter was founded in 1984, and Asselta has been involved since 2007.

“There’s no elimination for this contest,” she explains. “The hopefuls have only to apply. We had 14 originally, but two had to drop out because they got work.”
And so they begin.

“No. 1,” a disembodied voice announces, and Nikembe Patterson, 24, of Coral Springs appears.

For four minutes, he will be Tartuffe, from Molière’s play of the same name, then Alfred Doolittle from My Fair Lady for four more.

But Tartuffe has scarcely begun to speak before Judge Jeffrey Bruce, a professional actor with a résumé longer than eight minutes, interrupts.

The acoustics are not great here, he tells Patterson gently, and many in his audience may be elderly.

In other words, speak up.

This is the only time any of the judges interrupts. In addition to Bruce, they are Barbara Bradshaw, a professional actress for more than 42 years, and Sue Ellen Beryl, managing director of Palm Beach Dramaworks.

Charles Alguera, 20, of Lake Worth, is Troilus from Troilus and Cressida, then instantly transforms himself into Vince from Buried Child.

They are called. They appear. They perform a short speech from one classic play and one modern play, and they disappear.

No one stumbles or forgets a line. Rebecca Seide, 25, of Boynton Beach is a commanding presence, with a wild storm of thick black hair she whips about with passion during her performance as Shaw’s Saint Joan. She is also the only performer to use the chair, which she kicks.

By the time No. 12 is called and Darius J. Manuel, 25, of Fort Lauderdale has taken his turn in Titus Andronicus and Fences, the empty stage has been inhabited by William Shakespeare and Tennessee Williams, George Bernard Shaw and Aristophanes, Christopher Durang and August Wilson.

Asselta thanks them all, and the judges disappear to choose the winners.

Another half-hour passes and they are all called on stage again, where they finally hear applause.

Third place goes to Joshua Hernandez, 23, of Miami for his excerpts from Shakespeare’s Two Gentlemen of Verona and Water by the Spoonful, by Quiara Alegría Hudes.

“I chose that selection because she’s a Puerto Rican playwright and I’m Puerto Rican,” he said later.

A graduate of Florida State University, he has appeared at GableStage in Coral Gables.

“My parents supported me, but they told me to have a backup plan,” he said. “I think they saw how serious I am.”

Second-place winner is Jarod Neil, 20, a freshman at Lynn University, for his speeches from Romeo and Juliet and Laughing Wild, by Durang.

And first place, $2,000 and a trip to Washington, goes to Manuel, for Titus Andronicus and Fences.

Now all the actors sit along the edge of the stage to hear the judges’ praise and criticism.

Bruce singles out Seide, she of the stormy black hair and kicked chair.

“You were using your hair as a second character, so we couldn’t see your face,” he tells her. “If you start high, you have nowhere to go. If you’re yelling, you start speaking faster and we can’t understand a word you’re saying.”

Bradshaw echoes Bruce more generally. A lot of these young thespians have used their hands incessantly, as if they were conducting the words as they spoke.

“When you gesture,” Bradshaw advises, “make sure it has a meaning behind it.”

And Beryl seems to wonder whether some of them knew the context in which they were speaking.

“Read the entire play, so you know what you’re talking about,” she says. “Still is more powerful than hysteria. Underplaying is listening. Slow it down and enunciate.”

And so, they go upstairs for a lunch provided by the NSAL.

Seide was neither disappointed nor hurt by either her loss or the criticism.

“This was my first experience,” she said. “I have no theater experience. I’m a visual artist, but I messed up my hand — carpal tunnel — so I needed an artistic outlet and decided to apply.

“I guess they didn’t like my hair and my … overall-ness,” she concluded. “I guess stillness was preferred to hysterics.” 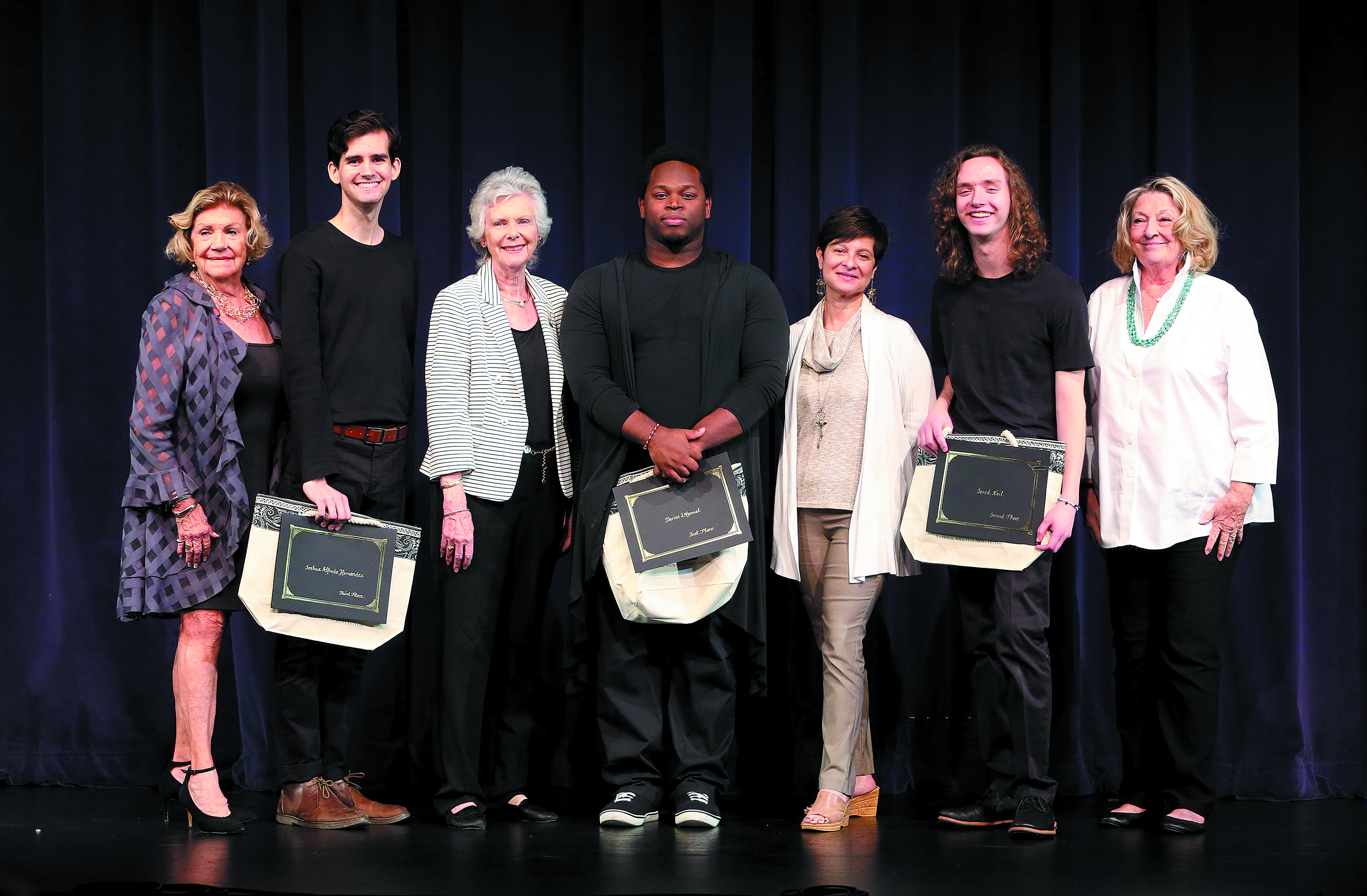 Tags: contest, national society of arts and letters
E-mail me when people leave their comments –
Follow