The number of drug overdose deaths has surged in Palm Beach County, jumping 62.8 percent over the last three years.
The number of people who died from overdoses rose from 226 in 2013 to 368 last year, according to data released in late February by the Palm Beach County Medical Examiner’s Office. 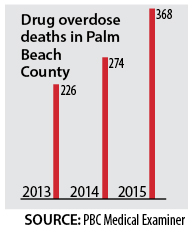 The overdose death increase in Palm Beach County mirrors a national escalation that resulted in 47,055 deaths in 2014.
“It is a crisis,” said James Hall, a Nova Southeastern University epidemiologist who studies substance abuse and drug outbreaks. “More people are dying from drug overdoses than traffic accidents in the United States.”
The county medical examiner’s data list 21 overdose deaths in Boca Raton in 2015, 27 in Boynton Beach, 25 in Delray Beach and 41 in West Palm Beach. These 2015 death tolls could increase when pending toxicology reports are completed.
The rising death toll is linked to the growing use of heroin.
The top four drugs found in the bodies of Palm Beach County overdose victims last year were morphine, heroin, cocaine and fentanyl. Heroin metabolizes in the body into morphine. Dealers often mix heroin with fentanyl, a powerful synthetic painkiller that increases potency and reduces the dealers’ costs.
“This is one of the worst epidemics I have seen, comparable to cocaine in the 1980s,” Palm Beach County Chief Medical Examiner Dr. Michael Bell told WPTV-Channel 5 in February. “I think the combination of mixing fentanyl with heroin is what is causing the epidemic.”
The trend has the full attention of law enforcement. “Heroin and heroin laced with fentanyl is our No. 1 drug threat from a public safety point of view,” Palm Beach Sheriff’s Office spokeswoman Teri Barbera said in an email.
In late February, West Palm Beach police said that heroin had killed 11 people in just more than two months, while the use of flakka, dubbed “$5 insanity,” has declined.
“There’s been a replacement of flakka with heroin,” said Capt. Brian Kapper in a Sun-Sentinel report. He called the increase in heroin seizures, overdoses and deaths “shocking.”
The decrease in the use of Chinese-manufactured flakka, which causes delirium, delusions, violent fits and aggression, follows the Chinese government’s October decision to ban flakka and 115 other synthetic drugs after pressure from the U.S. and other governments.
The Centers for Disease Control and Prevention minced no words in a January report: “The United States is experiencing an epidemic of drug overdose deaths.”
Since 2000, drug overdose deaths have increased 137 percent, including a 200 percent increase in the deaths involving opioid pain relievers and heroin. Heroin overdose deaths increased 26 percent from 2013 to 2014 and more than tripled since 2010. From 2000 to 2014, nearly 500,000 lives were claimed.
Midwestern and Northeastern states have been particularly hard hit, along with Alabama, Georgia, New Mexico and North Dakota.
While the impact on Florida is serious, it is less severe than in some other states. Florida drug overdose deaths increased 4.8 percent in 2014, far below the two states with the highest increases — 125 percent in North Dakota and 73.5 percent in New Hampshire, according to the CDC.

Addicts find alternatives
Yet Palm Beach County’s death rate is higher than the state average and Miami-Dade County’s. The rate was 20 per 100,000 population in 2014, while the statewide rate was 13.2 and Miami-Dade’s was 8.
Nationally and locally, overdose deaths affect all age groups. In 2015, the newly released county medical examiner’s data show 10.9 percent of those who died were 15-24, 30.1 percent were 25-34, 24.9 percent were 35-44, 16.1 percent were 45-54, 13.7 percent were 55-64 and 4.4 percent were 65 or over.
Males die more frequently from drug overdoses than women. In Palm Beach County in 2015, 69.9 percent of the victims were men and 30.1 percent were women.
The vast majority of last year’s Palm Beach County victims — 92.4 percent — were white, with blacks trailing at 4.9 percent and Hispanics at 2.2 percent.
Heroin’s roaring comeback as a killer locally is a result of the crackdown on pill mills that handed out prescriptions for highly addictive painkillers like oxycodone. Florida was hard hit by this scourge, with people from other states flocking here to stand in line for prescriptions.
As pill mills were driven out of business beginning in 2011, the price of prescription drugs on the illicit market increased dramatically. “Heroin became the cheap alternative to prescription opioids,” Hall said.
That history also explains why so many white men die of overdoses now.
“White males were predominantly using opioids,” said Jeff Kadel, executive director of the Palm Beach County Substance Awareness Coalition. Addicted but cut off from their usual supply, they turned to another drug.
The heroin business has changed as well. Since the 1990s, most of the heroin east of the Mississippi came from Colombia. “What we have seen in recent years is a dramatic increase in heroin production in Mexico, as well as refining of production methods,” Hall said.
To increase the potency, heroin is mixed with fentanyl that is produced in clandestine labs in Mexico or China. Fentanyl, up to 100 times more powerful than morphine and 30 to 50 times more potent than heroin, is even passed off as heroin because its euphoric effects are very similar, according to the substance awareness coalition.
“Newer, more potent heroin cut with fentanyl is a far more dangerous and deadly addiction,” Hall said.

More treatment needed
About 100,000 people are in treatment at the many rehab centers or sober houses in Palm Beach County and recidivism rates are high, Kadel said. That shows up in the overdose death statistics, he said.
If people in treatment stop using drugs for a time, the tolerance they have built up decreases, Hall said. “If they go back to using the same amount, that can lead to an overdose death.”
While the Florida Legislature has taken steps to eliminate pill mills and doctor shopping, it has reduced funding for treatment, Hall said.
“Florida’s failure was it ignored the demand side and expanding treatment opportunities,” he said. “We are not getting rid of this until we expand treatment programs” and allow insurance to pay for it.
Kadel, who heads a federally funded prevention organization, would like to see greater focus on prevention. “As a prevention organization, we are concerned (Congress) tends to throw money at the problem rather than trying to prevent the problem. I am hopeful some dollars will be sent to the prevention field.”