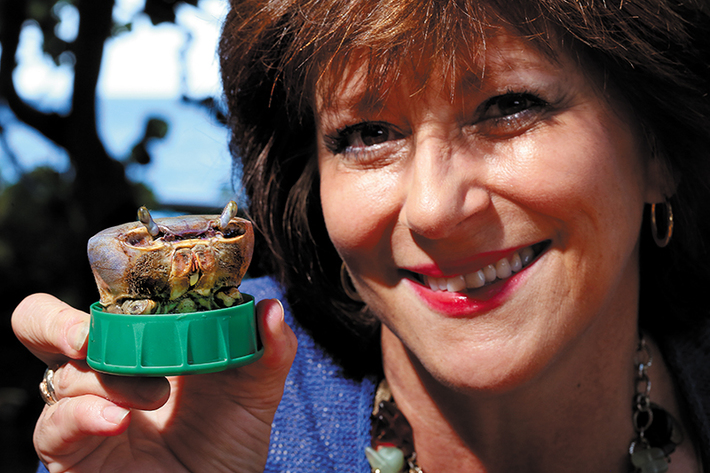 Tina VaLant of Boca Raton, who rescued HERbert, changed the spelling of the name when she found out the crab was female. The severed legs may grow back as part of HERbert’s molting process. Tim Stepien/The Coastal Star

On the afternoon of Thursday, Oct. 29, Tina VaLant drove to Gulf Stream to pet-sit Racer, an adorable golden retriever puppy owned by her friends Linda and Turner Dean.
Sorry, but this story is not about that puppy.
As VaLant and Racer walked east along Banyan Road between Gulfstream Road and Oleander Way, her gaze fell on a very weird rock by the south side of the road.
VaLant walked over, picked up the weird rock — and screamed.
Oh, my God, it’s got eyes and it’s moving! She was holding a disabled Cardisoma guanhumi — a giant land crab — without any legs that would soon become a minor media sensation.
VaLant, 59, is a “freelance photographer, nature enthusiast and mental health advocate” who has raised and released butterflies — monarchs, yellow barred sulfurs, zebra longwings — for more than 20 years.
She brought the legless crab home to suburban Boca Raton and turned one of the mesh butterfly enclosures in her second bathroom into an apartment for the injured crustacean.
“Words have power, so you don’t want to call it a cage,” she reasons. “It’s an apartment.”
The apartment is adorned with an amethyst crystal and small American flag.
Now, for a name.
After her neighbors Martha and Larry moved to Orlando, VaLant named two of the ducks in her local park Martha and Larry so she would still see her friends every day.
“I name everything,” she explains. “I’m a highly sensitive person, so I looked at the crab and ‘Herbert’ came to me.”
After butterflies, VaLant’s latest passion was TikTok, the trendy social network that hosts homemade, 60-second videos both sweet and silly. VaLant had become a TikTokker back in April after a friend sent her an inspirational video.
“I had thought it was a stupid kids’ app,” she says, “but it’s great for people with short attention spans and hamster brains.”
On Friday, Oct. 30, Herbert starred in his first TikTok video, and then a second on Halloween.
“And when I came back from a walk, my phone was hot!” VaLant exclaims.
Before Herbert, her TikTok butterfly videos had garnered about 4,000 followers.
Now she had 16,700 in just two days, and 204,000 likes.
When Herbert’s third performance appeared on Nov. 1, her following jumped to 35,000.
“Not that I care about being TikTok famous,” she emphasizes. “I just want to spread positivity.”

He’s a she
Almost immediately, however, fame complicated her life.
Some of Herbert’s fans started messaging to insist, “That’s a girl.”
VaLant called Evan Orellana, a marine biologist at the Sandoway Discovery Center in Delray Beach, who watched one of Herbert’s videos and agreed with the messages.
“The underbelly of a giant land crab, called the apron, is wider on a female, more triangular on the male,” he told her.
This crab had a wide apron.
Herbert’s name is now HERbert, and by Nov. 18, her 30 TikToks had hit 1 million likes and 84,000 followers.
Orellana also told VaLant that HERbert had probably lost her legs in a lawn maintenance accident.
“Based on how it’s a clean cut, it’s very possible it crawled in a lawn mower,” he said. “A predator would have eaten her, and they don’t leave behind the crab.”
Orellana estimated HERbert to be at least 5 years old, an adult.
HERbert measures about 3 inches across, which might not seem to qualify her for “giant land crab” status, but size is relative, Orellana noted. Compared to fiddler or mangrove crabs, about the size of a quarter, HERbert is indeed a giant.
Giant land crabs can live to be 10 to 15 years old, if a bird, otter or raccoon doesn’t eat them first, which they often do.
But what VaLant wanted to know, of course, was whether HERbert would ever walk again.
Orellana gave her a firm “maybe.” It all depends on how the molting goes.
Snakes shed their skin and crabs molt.
Once a year or more, as they grow too big for their outer skeletons, crustaceans emerge from the back and hide while they grow a new shell.
“But molting is not just getting a new skeleton,” Orellana says. “If they lose a claw, after two or three successful molts they can grow back.”
It would take time, but HERbert’s claws may grow back.
“I’m optimistic,” Orellana says. “It’s eating, and it’s not cowering or hiding. I think that’s a good prognosis.”
Waiting for HERbert to molt, VaLant continues to release more TikToks while nursing her legless star.
“I’m giving her a critical care supplement,” she reports, “and sometimes I dust her food with a high density nutrient powder. She likes to have her upper shell rubbed horizontally but not vertically.”
HERbert is fed 10 times a day — mango, kiwi, pineapple. “And last night she had shrimp from my husband’s dinner,” VaLant adds. “My husband thinks I’ve lost it.”

Most of HERbert’s fan mail is positive, including one message from an animal psychic who wanted VaLant to know that HERbert is very grateful for her loving care.
Occasionally, the rare cynics suggest that she just eat the crab and be done with it.
“But I’m a vegetarian,” VaLant tells them.
On Nov. 30, HERbert’s 47 TikToks had tallied 1.4 million likes and almost 117,000 followers.
“Most people who know me think I’m a little out there,” VaLant is happy to concede. “I’m a little woo-woo, but I embrace my weirdness.”
And should HERbert fail to regrow her legs, VaLant has already envisioned another way to spread positivity.
“Maybe she will become a therapy crab and go to hospitals to visit patients,” VaLant says. “What if somebody has lost their limbs? Here’s a crab who lost her limbs in a lawn mower accident, and she’s still inspiring millions.”