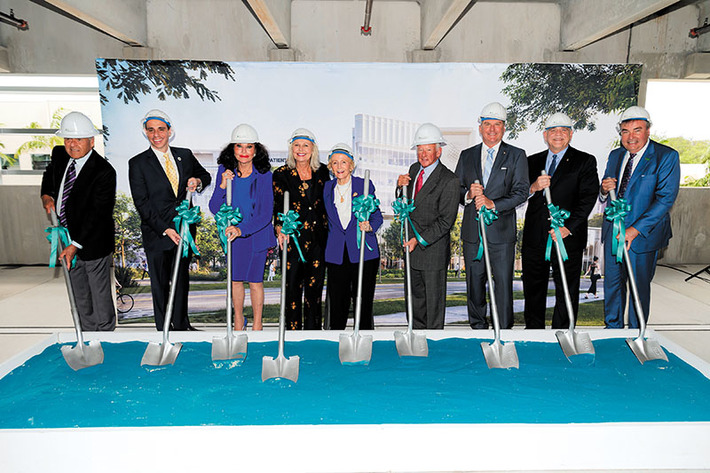 Boca Raton Regional Hospital officially broke ground in March for the new Gloria Drummond Patient Tower. The building is the cornerstone for the hospital’s campus transformation and the $250 million Keeping the Promise capital campaign.
At the center of the day’s event were Elaine J. Wold and her Bay Branch Foundation. Wold made a $25 million gift to Keeping the Promise and she named the tower in memory of Boca Regional’s founder, Gloria Drummond, her lifelong friend, who died in 2011.
“I believe we all have a responsibility to improve the level of health care in our area, to forge new directions, and bring new medicine to our families here,” said Wold. “It is also important to remember and honor our origins, which is really the foundation of everything this hospital has become.
“Gloria Drummond’s name is synonymous with Boca Raton Regional Hospital. Her legacy and spirit remain deeply ingrained in everything we do and whatever future we create.”
Wold previously gifted $10 million to construct the hospital’s 37,500-square-foot Gloria Drummond Physical Rehabilitation Institute, and she donated money to expand and modernize the hospital’s emergency department, creating the Wold Family Center for Emergency Medicine.

Dr. Jeff Newman, medical director of cardiothoracic surgery at Delray Medical Center, was appointed chairman of the hospital’s governing board.
Newman, who has been on the medical staff at the hospital for more than 25 years, received his medical degree from New York Medical College in Valhalla. He did his internship and residency at St. Luke’s-Roosevelt Hospital Center in New York City, in general surgery.
Newman completed his fellowship at Robert Wood Johnson Medical School in New Brunswick, New Jersey, in thoracic surgery.
His focus is on adult cardiac surgery, along with expertise in traditional coronary and valve surgery. He also focuses on mini-mitral valve surgery and mini-aortic valve surgery. He is proficient at using the da Vinci robotic system for lung cancer surgery and is involved in trans-catheter aortic and mitral valve procedures completed at Delray Medical Center.

Delray Medical Center’s chief operating officer, Maria Morales Menendez, was selected as a member of Modern Healthcare’s 2022 class of Top 25 Emerging Leaders.
Modern Healthcare annually honors emerging leaders, age 40 or under, who are making significant contributions in the areas of innovation and financial, operational and clinical excellence.
“Maria was appointed COO at one of the most challenging times facing any health care professional. Despite being in the early stages of her career, she has proven to be an excellent leader, overseeing programs to enhance quality of care, patient safety, and distribution of COVID-19 vaccines to our employees and medical staff,” said Maggie Gill, chief executive officer of the Palm Beach Health Network and Delray Medical Center.

Blue Cross and Blue Shield Association selected Delray Medical Center as a Blue Distinction Center for knee and hip replacement as well for spine surgery. Blue Distinction Centers are nationally designated health-care facilities that show a commitment to delivering high-quality patient safety and better health outcomes, based on objective measures that were developed with input from the medical community and accreditation and quality organizations.
For more on the center’s orthopedics program, call 561-637-5197 or go to www.delraymedicalctr.com/services/orthopedics.