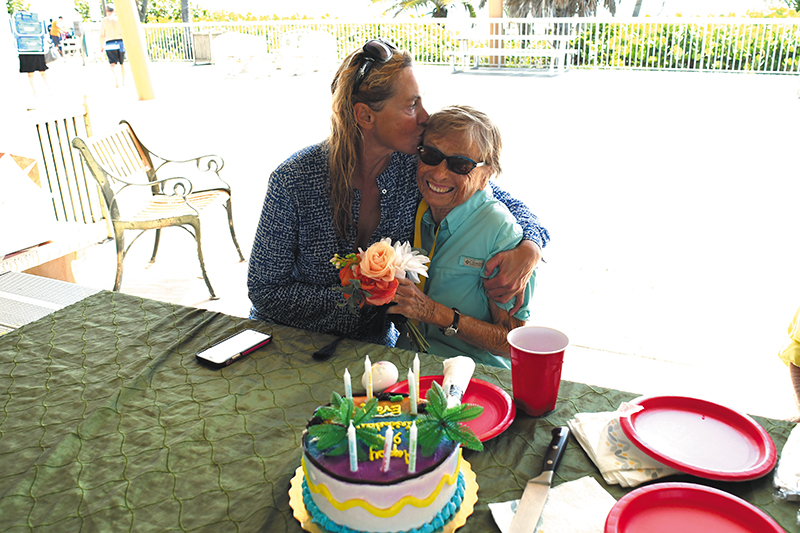 Tatyana Fishman gives Eva Takacs a hug during her 90th-birthday party at Oceanfront Park.
Fishman and Takacs, both of Boynton Beach, do daily swims there. Jerry Lower/The Coastal Star

People walk the beach at Oceanfront Park scanning the shore for wave-smoothed shards of sea glass or unblemished sand dollars. Almost four years ago, ocean swimmers Eva Takacs and Tatyana Fishman found the most precious treasure of all — each other.
“One day I was swimming, and I always have trouble getting out of the water,” says Takacs, 90, of Boynton Beach. “My balance isn’t great. So, I was looking around for somebody to help me. Here’s this poor, pathetic, old lady trying to get out of the water. Tatyana came along and took me out like I weigh nothing.”
Fishman, 57, also of Boynton Beach, smiles. “Since that day, I am responsible for getting her in and out of the water. It’s funny to see but we have developed a friendship. She is an inspiration. I actually don’t know anyone else who is 90 that goes into the ocean. Do you?”
“Tatyana has extended my life,” Takacs says. “The ocean has extended my life.”
Fishman, Takacs and Ocean Ridge resident Jay Magee, 66, form a trio of daily and lifelong swimmers who combine the healthful benefits of friendship and a vigorous ocean workout. They swim for an hour at their own pace, as long as there’s no red flag flying from the lifeguard stand. When all’s clear, the swimmers suit up in their own mix of neoprene, sun-shielding clothing and topical skin protection, and head into the surf.
Fishman, who’s a good foot taller than Takacs, leads her friend into the ocean and finds her a sargassum-free patch of water not too far from shore. Then she heads off on her own, usually swimming about a mile. Throughout, she keeps a close eye on Takacs’ bathing cap-cloaked head. Of course, the lifeguards always have this beloved beach icon in their sights.
Magee, a former swim coach, logs about two miles every day. “I feel like a Coast Guard rescue swimmer some days when it’s really big out there,” he says. “I like swimming through the waves. You’re more buoyant because of the salt, and it’s just easier to swim. I’ve seen incredible things. I see tarpon all the time. I’ve seen lobster doing a lobster crawl, where they’re all head-to-tail in a line — hundreds of them. I’ve seen manatees out there. There’s a nurse shark that lives down on the rocks off the Ocean Club. It’s just amazing what you see.”
That sense of wonder is another gift from the sea. Being outdoors adds a natural dose of Vitamin D, good for bone health. And swimming can help lower blood pressure, boost mood, ease arthritis pain and tone the body.
Though just a sample size of three, Takacs, Fishman and Magee could provide researchers with anecdotal evidence gathered over their lifetimes of swimming in the sea. Takacs has been swimming at Oceanfront Park for 60 years, from the time her parents made Boynton their home.
“The funny thing is, it gives you relaxation but at the same time it gives you energy,” Fishman says. “Whatever happened yesterday, whatever happened in the morning … after swimming an hour, you forget about it. I spoke to a therapist once who told me that swimming is dynamic meditation, because it’s all about breathing in and out. You can basically do it with walking, too. That’s why his wife walks the beach.”
Nadine Magee walks daily from Oceanfront Park to Gulfstream Park and back. “That’s how you met her,” Jay Magee says to Fishman. “She was walking back.”
Such are the serendipitous friendships that blossom at this beach. Lured by the sun, sea and salt air, an informal group of beach-lovers congregates regularly.
“They’ll come early in the morning. Some will stay a short time; some will stay all morning. Everybody knows everybody. And, you know, it’s ‘Hi, how are you’ and ‘Beautiful day on the beach.’ We just love this,” Magee says, gesturing toward the ocean. “The beach, and the water.”
When Takacs turned 90 in April, Fishman organized a beachside surprise party for her cherished friend.
“Everybody was so happy to congratulate her on her birthday,” Fishman says. “She’s amazing. She’s sharp, and we are really friends. I tell her things … that I wouldn’t trust to anyone else.”
“And I care,” Takacs says, “I really care. I don’t have many friends. They’re all in a nursing home or someplace else. Except at the beach.”
The ocean, her friends, the swimming— they’re “everything,” Takacs says.
“It’s made me feel different. If I’m tired, instead of lying down or looking at television I want to go swimming. And it makes me feel great. And it’s never too crowded, even if it’s crowded. We just go on out. And we’re in the water, and it’s all ours.”