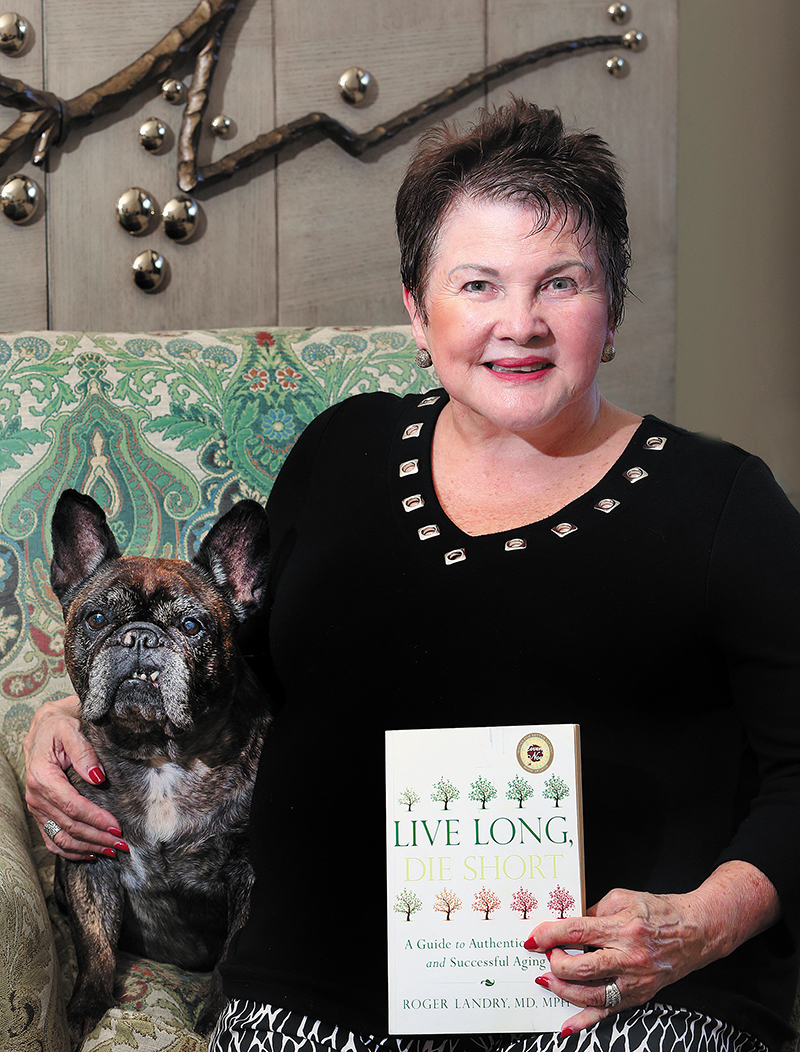 Harbour’s Edge resident Nancy Flynn is working with a trainer as part of author Roger Landry’s program. She sits with his book and her French bulldog Jazz. Tim Stepien/The Coastal Star

All the evidence was that the residents of the Harbour’s Edge senior community were more than ready to Live Long, Die Short, as in the title of the book whose author, Roger Landry, was about to pitch his program for a vital old age. Every seat in the large banquet room was filled, with walkers and other devices parked in all the remaining available space. Those who could stand, mostly staff members, lined the walls.

And if there were any skeptics, Walter Krueger, from Abbey Delray, another Lifespace retirement community in Delray Beach, gave them an endorsement.

“We’ve been involved in the program for two years at Abbey Delray,” he said. “It’s so important in life to have a plan. People say, ‘Oh, I’m through.’ I had a bucket list when I retired, three pages on a legal pad. I cross off one and added two more on the bottom. By keeping active, you’re the boss and CEO. You’re running things. You’re directing all your energies for the first time in your life.”

Nancy Flynn, part of the team that brought the Masterpiece Living program to Harbour’s Edge, is using the program and has begun to work with a trainer.

“I’ve been here less than two years,” she told the group. “I’m in my mid-70s, I lost my husband and came to Harbour’s Edge to expand my connection with people. The point is that the programs are available here to maintain your health while you age.”

Landry was a flight surgeon for 22 years before joining his brother Larry in forming the Masterpiece Living program and to write Live Long, Die Short. The core of the program is that living a healthy lifestyle allows people to age with less pain and more joy and purpose, and to die “short,” without years of illness and pain.

He teased his audience about the perennial failure of New Year’s resolutions.

“Why do we fail?” Landry said. “Because we take on too much.” He offered the Japanese idea known as kaizen, or incremental improvement.

“You take small tiny baby steps towards wherever you want to go.”

He described his client Tony, who for a couple of years promised himself he would get more active, but never seemed to follow through.

“I told him just to stand during TV commercials,” Landry said. “After a week, I said, ‘Now I want you to walk in place.’”

Landry asked the audience a series of questions based on a self-assessment in the Masterpiece program. The answers would be the basis of a program tailored to each person’s needs.

“First question: Are you using it? Sitting is the new smoking,” said Landry, comparing the risk factors of a sedentary lifestyle with those from using cigarettes. “Our ancestors were hunter-gatherers. Our brains, muscles, heart, everything works better when we move.”

More good news, said Landry, is that brain science now suggests that you can teach an old dog new tricks.

“Neuroplasticity is now the lifelong ability of the brain to rewire itself in response to what we ask it to do,” said Landry. For example, his client Nola was considering studying for a master’s degree at age 98, after fully recovering from a stroke.

“There’s a real benefit that comes from learning new things,” said Landry. “When they scan brains of people learning a new language, they see the brain getting heavier and thicker as it makes new connections. If you don’t want to learn a new language, how about you eat with the opposite hand? How about you get lost? Challenge yourself. Get out of your comfort zone.”

All those changes are enhanced by connection with other people, Landry said.

“We are not solo creatures. People can be annoying, but we still need them.”

Speaking of the social context of health, Landry added the need for a sense of value.

“Don’t let others put you at risk,” he advised. “People have low expectations of what aging is all about. They don’t see you as human capital. You need purpose and society needs you.”

And then there are the children.

“Don’t ever plan to live with your kids,” he said. “They love you too much to let you age in the best way possible.”

When Landry met Chuck Yeager, the pilot who broke the sound barrier and was immortalized in the book and film The Right Stuff, Yeager said he planned to do it again on the 50th anniversary of the feat. “But you’ll be 70!” Landry protested.

The message, said Landry, is this: “Is your spirit or your age in charge? Never act your age. Shock people. Be out there experimenting. Life expands or contracts in proportion to our courage.”