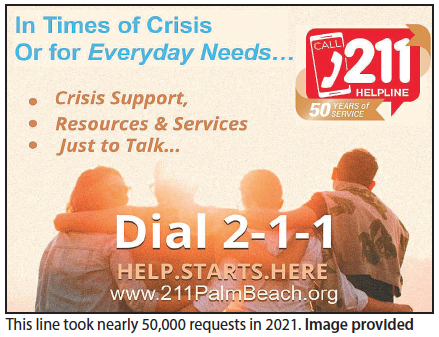 Sharon L’Herrou’s voice breaks when she tells the story:
“I’m just sitting at my desk and I get a call from a mom. I don’t even know how she got my number. But she called me and said, ‘I just wanted you to know that my son is alive today because of you and your team. He called in the middle of the night. I didn’t even know anything was going on until the call, and he would’ve been dead. But he is OK. We got him to the hospital. You guys saved his life. I’m still a mom today because of you.’”
He had dialed 211, a helpline, hotline, lifeline.

“It chokes me up every single time that I think about her voice when she talked about her son and how she almost lost him,” says L’Herrou, who is president and CEO of 211 Palm Beach/Treasure Coast, which was founded in 1971 as a drug hotline and has grown to offer crisis counseling, suicide prevention, information and referrals.
The Centers for Disease Control and Prevention says suicide is the 10th-leading cause of death in the United States, and the second-leading cause of death for people between the ages of 10 and 34.
Last year in Palm Beach County, the 211 Helpline received close to 50,000 requests for help; 604 of them were suicide-related. 211 has highly trained resource specialists available 24/7 to provide confidential crisis intervention and connect people to vital resources.
“One person’s crisis may not seem like a crisis to another person,” L’Herrou says. “We’ve gotten calls from teenagers who are actively suicidal because their boyfriend or girlfriend is breaking up with them. So, depending on the situation … they may actively say, ‘I am thinking about killing myself,’ or they may say something that’s a little more vague like, ‘I just wish I wouldn’t wake up in the morning.’
“We are going to ask them some questions about that and talk to them about where they are with the goal of deescalating and keeping them safe. … Our primary goal is to help them live through that day. So, we’re not necessarily thinking longer term in that moment.”
During the call, the resource specialist will try to extract a promise that the caller isn’t going to harm himself, L’Herrou explains.
“We say, ‘We want to talk to you again tomorrow. Can I call you again tomorrow?’ And then if we get that permission, and we know that they have promised to stay safe, we’ll follow up with them the next day, and maybe even a few days later. We can follow up several more times to the point where they may then be willing to talk with us about ongoing supports and services, which we will do in a follow-up call.”
L’Herrou says quite a few support options are available in Palm Beach County, including counseling and therapy services that are offered free or on a sliding scale. Support groups are another possibility.
“There are support groups for different populations that are facing specific stressors. It’s been commonly talked about recently that people in LGBTQ community have higher instances of challenges with mental health and suicidal thoughts. Our veterans are a group that have higher rates of suicide. In fact, on our team, we’ve added two veteran peers to work with veterans specifically,” she says.
And we can all try to prevent suicide by becoming better educated and improving our awareness.
“Everyone has a role to play to save lives and create healthy and strong individuals, families and communities,” the CDC says.
L’Herrou fervently agrees.
“I think that there are so many things we can do and honestly, at its most basic level, what we have to do is just remember to care about each other. Really, really just care about each other. We have to step back a little bit from some of our harsh viewpoints … that lead us to be maybe a little bit harder on our neighbors and our colleagues and our friends.
“And to remember that we don’t know what’s going on with people under the surface. So, if we can just start from a place of caring, that’s huge,” she says.
“And then, for the people that we’re close to, if we can be there for one another, check on each other, make sure that we are reaching out to the friend that maybe we haven’t heard from in a while. … The human touch is the most important thing of all.
“And that’s why the work that we do is so valuable, because it’s one human talking to another. Sometimes people who are thinking about suicide say … and this chokes me up, ‘No one cares if I live or die, no one cares.’ And so, when they reach out to us, our team is able to say, ‘I care, I am talking to you right now. And I care.’”

Warning signs
People may need help if they are: