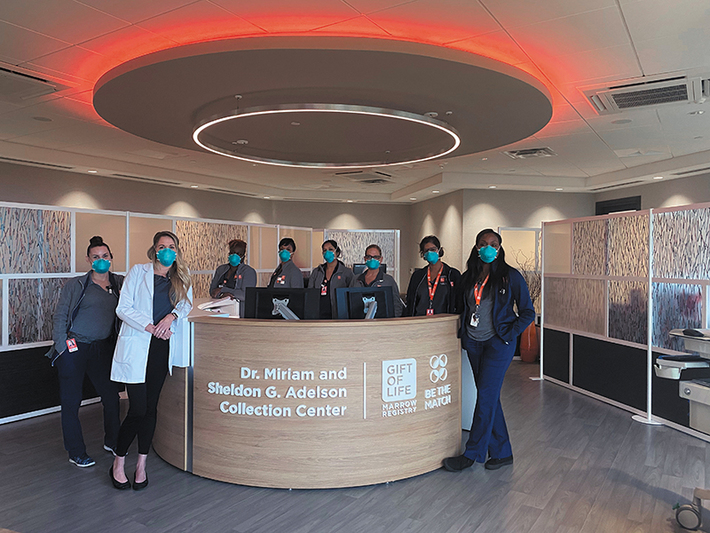 The staff at the Gift of Life Marrow Registry donation facility in Boca Raton — the Dr. Miriam and Sheldon G. Adelson Collection Center — has worked to save the lives of patients with blood cancer and other blood-related diseases. Photo provided

Evie Goldfine was 50, widowed with two college-age children, when her doctor told her she had stage 4 lymphoma. “He said, don’t bother getting a second opinion, which is not something a hospital in Boston would normally say to you,” she recalls. Ultimately, he said, her survival hinged on getting a peripheral blood stem cell transplant.

But he also had good news: He was confident she’d find a match through the Gift of Life Marrow Registry in Boca Raton.

He was right. At a Boston donor drive, Yisrael Goldman had offered up a swab of his inner cheek for genetic testing and cataloging with the national, nonprofit registry. He was studying in Israel when he learned he was a match.

Initially, it was a shock, he says. “I never believed I would actually get a call. It’s like seeing your winning numbers on your lottery ticket.” He flew back to Boston to donate blood stem cells the transplant, which took place on July 25, 2005.

“I was very, very lucky,” says Goldfine, who is now 73 and winters in Palm Beach Gardens. She is an avid Gift of Life fundraiser and supporter.

Once the veil of anonymity lifted a year after the transplant, Evie and Yisrael met and “have become best of friends and close like family,” he says. “We try to visit each other as often as we can find time in our busy schedules. My kids love Evie and think of her like a grandma.”

Jay Feinberg built the Gift of Life Marrow Registry to make success stories like Goldfine’s possible. As a 22-year-old with leukemia needing a bone marrow transplant in 1991, Feinberg found his own donor search to be arduous.

Tissue is inherited, he explains, and matches are found among those with similar race and ethnicity. Donors with his Eastern European ancestry were minimally represented at the time. He and his family launched a global search, establishing the Gift of Life Marrow Foundation in November 1991. By the time he’d found a matching donor four years later, the international search had added more than 60,000 people to global registries and Feinberg had found his life’s work.

“When I got sick, I was just starting law school,” he says. “After I recovered from my transplant and I knew that I was given a second chance thanks to the kindness of a complete stranger, it was just important for me to be able to pay it forward and help all of the other patients in similar circumstances.”

As Gift of Life celebrates its 30th anniversary this year, CEO Feinberg, 52, is keeping the focus on diversity.

“There still remains tremendous inequity when it comes to finding a suitable match for people of all backgrounds,” he says.
According to Gift of Life, 55% of Latinos, 60% of Asian Americans, 75% of African Americans and 75% of multiracial individuals cannot find donors. Feinberg has partnered with the NAACP for seven virtual town halls on addressing health care disparities. Through these and other collaborations, Feinberg hopes to raise awareness and advance recruitment.

There are now more than 380,000 potential donors in the registry, and Feinberg expects to end the year with more than 400,000. Gift of Life largely recruits donors who are between the ages of 18-35. “A lot of that has to do with just pure biology: The younger you are, the more cells that you can donate to the recipient,” he says. “The older you get, the more challenging that becomes.”

Although Goldfine and Feinberg needed donors of bone marrow, Feinberg says 80% of donors now are called to provide peripheral blood stem cells for transplants, which they can donate at Gift of Life’s headquarters on Broken Sound Parkway.

“These are cells that are taken from the arm through the blood. If you’ve ever seen someone donating platelets before, it’s a very similar procedure. So, when people come here, they sit in a recliner chair, they watch Netflix, they get fresh-baked chocolate chip cookies. … And a few hours later they’re finished, they get to go home. And they leave knowing that they saved a life.”

David Silverstone, 25, from Boynton Beach, has donated once and says if he’s needed, he’ll do it again. “There are very few times in life that you will be called upon to directly save someone’s life,” he says.

Prior to his procedure, Goldman said, he had “maybe some anxiety of the unknown. There was really nothing to be worried about.”

Donors providing bone marrow do so in the hospital, under anesthesia. A doctor removes the marrow from the iliac crest of the hipbone. Gift of Life explains: “The goal of transplantation is to fully replace the patient’s bone marrow and immune system with healthy hematopoietic stem cells that will form new, healthy bone marrow that generates a new immune system, free from the conditions that caused the need.”

In November 2020, Gift of Life announced the opening of the Center for Cell and Gene Therapy at its Boca Raton headquarters, to offer transplant physicians, researchers, and cell and gene therapy developers “donor cell products they need to help more patients than ever before.”

Feinberg says: “What’s happened in medical technology and in the world of treating people with blood cancer and some other serious illnesses is that not only can they be treated with marrow and stem cell transplants, but you can also treat them with immunotherapies and cell and gene therapies that basically are living drugs.

“These drugs are created by taking biological material — in particular, cells — from the blood of healthy volunteer donors and engineering them into these living drugs that then get infused back into patients to cure them of their diseases.”

Last year, despite the challenges of the coronavirus pandemic, the Gift of Life registry facilitated 236 transplants, more than in any other single year in its history. This year, Feinberg expects to facilitate approximately 270.

“I’m very happy with the decision that I made and very blessed to be able to come into our office here in Boca every day and have the opportunity to greet the strangers who give of themselves to save the lives of people they don’t even know. It’s really an honor,” Feinberg says.