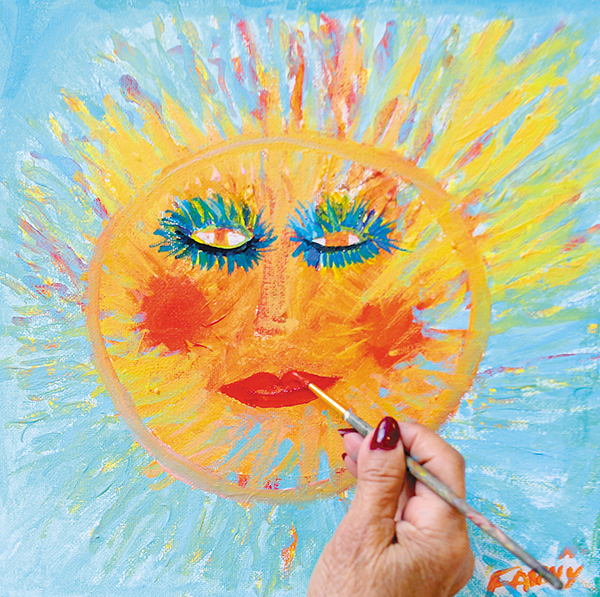 Some people in the FAU study took part in painting classes or other activities at the Louis and Anne Green Memory Center in Boca Raton. Tim Stepien/The Coastal Star

The scenario is familiar and sad.
“This couple, you can see the problems they’re having,” Christine Williams, director of the Ph.D. in Nursing program at Florida Atlantic University, says while scanning a report on a study she led. “She doesn’t understand that he can’t do any better than he does. She’s very critical, demeaning, harsh. He’s very stubborn.”
The study attempted to help couples communicate better when one of them has Alzheimer’s disease or another type of dementia.
Williams, also a professor at the nursing college, designed the study and was its principal investigator.
For 10 weeks, researchers from the Christine E. Lynn College of Nursing worked with 15 couples in their homes. Caregivers were trained to reduce critical behavior and care receivers learned to reduce their unsociable habits, such as not making eye contact. Researchers found measurable positive changes in communications by the end of the 10 weeks, including the ability of care receivers to stay interested and engaged, remain on topic and even joke with their partners. Caregivers learned how to encourage their partners rather than shutting them down.
The study was published in the International Journal of Geriatric Psychiatry.
Couples, who all attended programs at the Louis and Anne Green Memory and Wellness Center, received a manual with 10 weekly areas of study. Researchers met each week with couples, separately and together. For 10 minutes each week, the couples engaged in conversations that were put on video and later evaluated.
“This intervention is important because there are no other programs specifically developed for couples where one has Alzheimer’s disease or dementia,” Williams said. “While marital counseling is available, it’s very different when you have one partner who is losing their ability to communicate.”
More than 5.4 million adults in the United States have Alzheimer’s disease and related dementias, and more than 15 million family members care for them at home. A substantial number of caregivers, 40 percent, are spouses. Spouse caregivers have received billions of dollars in health care for stress-related issues.
When case workers teach new practices to couples, their lives improve, Williams reports.
“After she learns what his limitations are, she’s trying to get him to take his antibiotic,” Williams says. “He does eventually take it, and they joke as they go along.”
Later, she says, “You can see how she gives him all the chances in the world to talk. She doesn’t talk for him, she doesn’t demand.”
In between is a painstaking process that reveals the shame, the fear and the resentment below the surface of marriages under the ultimate stress.
“Somehow, we think that what our spouse does reflects badly on us,” she says, referring to the sometimes baffling behavior of people with Alzheimer’s. The caregiver spouse “is just mortified.”
During the 10-week study, caregivers learned to improve their spouses’ behavior and reduce their own stress.
“When you hold a conversation with them, when you are supportive, encouraging and boosting their self-esteem, you give them the message that they are worth talking to,” Williams says. “You can, with your attitude, still give them the time to be in a relationship.” Christine Williams’ study examined communication skills between couples in which one of them suffers from memory loss. Photo provided

Study inspired by personal experience
To have a spouse with Alzheimer’s still carries a stigma and can isolate a couple from their friends. Some couples bond with others in the same situation, Williams said, meaning they don’t have to explain to someone who might not understand or tolerate it.
They know to be patient if, for example, a spouse has trouble ordering food in a restaurant.
Some people with Alzheimer’s “think they’re fine, but a lot of people are painfully aware,” Williams says. “One woman told me, ‘My husband just puts his arms around me and says, ‘I’m so sorry this is happening.’ It’s heart-wrenching for these couples.”
Williams’ interest in caregiver couples started when she observed her parents in their later years. Her father, she says, was a wonderful caregiver to her mother but didn’t understand the extent of her memory loss. He tried to argue her out of incorrect memories.
“He didn’t know how to just drop it, and she was getting frustrated,” Williams says.
Although much research focuses on nurses and other professional caregivers, research on family caregivers is rare, Williams says.
Spouses can learn how to get their loved ones to continue to care for themselves, such as brushing their teeth, and how to deal with more complex issues of relating to them as people despite their limitations.
The stress of caring for an Alzheimer’s patient can reveal the cracks in a relationship.
“When suddenly they don’t recognize this person, having empathy becomes more challenging,” Williams says. “They may say, ‘He’s not the man I married.’ And if there is [emotional] baggage, they may be rolling that into the Alzheimer’s.”
Sometimes, the key is to help the caregiver to accept that the spouse with Alzheimer’s “is not going to miraculously change.”
One man in the study kept showing photos to his wife and demanding, “Who’s this? That’s your twin daughters.”
“I did convince him that that was not helpful,” Williams says.
Williams wants couples and families to know “there is hope. And if there’s nothing more to be done, they can learn to maintain that connection and learn how not to interfere with the relationship and with what the person can still do.”
The Louis and Anne Green Memory and Wellness Center has a couples group that includes support groups, caregiver education and memory-enhancing games, mindfulness training and respite for caregivers. For more information, visit fau.edu/memorywellnesscenter.

Lona O’Connor has a lifelong interest in health and healthy living. Send column ideas to lona13@bellsouth.net.

1. Share news of the day: Talk about family and friends and the daily agenda so that your family member with memory loss is still involved in everyday life.
2. Expectant waiting: Set aside a small amount of time, when you are not busy and distracted, just to talk. Focus on being open to whatever your family member considers important. You don’t need to keep talking. It’s OK to sit quietly together and let your family member break the silence.
3. Connect: Communicating is more than talking or exchanging information. You can communicate without words. What is your voice saying? Does it show compassion, impatience, love, disrespect? Are you communicating what you intend? Is the message one of caring?
4. Search for ways to communicate: Try multiple ways of engaging. Try a new topic, a touch, a smile or a song.
5. Accept their story: Listen without correcting. Honor your loved one’s efforts to communicate even if you disagree with “the facts.” Being “right” is not as important as being supportive.
6. Share memories: Couples share special memories. Rather than ask, “Do you remember the time …,”  share the memory freely. Offer memories of special times.  Think of it as a gift. Start with “I remember when. …”
7. Tell stories: Talk about shared interests, what you are reading, what you noticed about people, events or nature. These are everyday stories that can help you stay engaged with your family member.
8. Create a caring environment: By creating predictability and a supportive environment, you are making it possible for your family member to take the risk to join conversations. Being corrected or ignored is painful and can encourage someone with a memory problem to give up trying.
9. Give compassionate care: When a loved one with a memory problem needs help, provide it with compassion. Use words and gestures to express your affection as you offer help. While love may have been taken for granted before, it needs to be openly expressed now.
10. Delight in unexpected responses: There will be moments of clarity, shared humor, or times when your family member will let you know that you are appreciated. Feelings are beyond words. Appreciate and cherish those special moments.
Source: Christine Williams, director of the Ph.D. in Nursing program at Florida Atlantic University