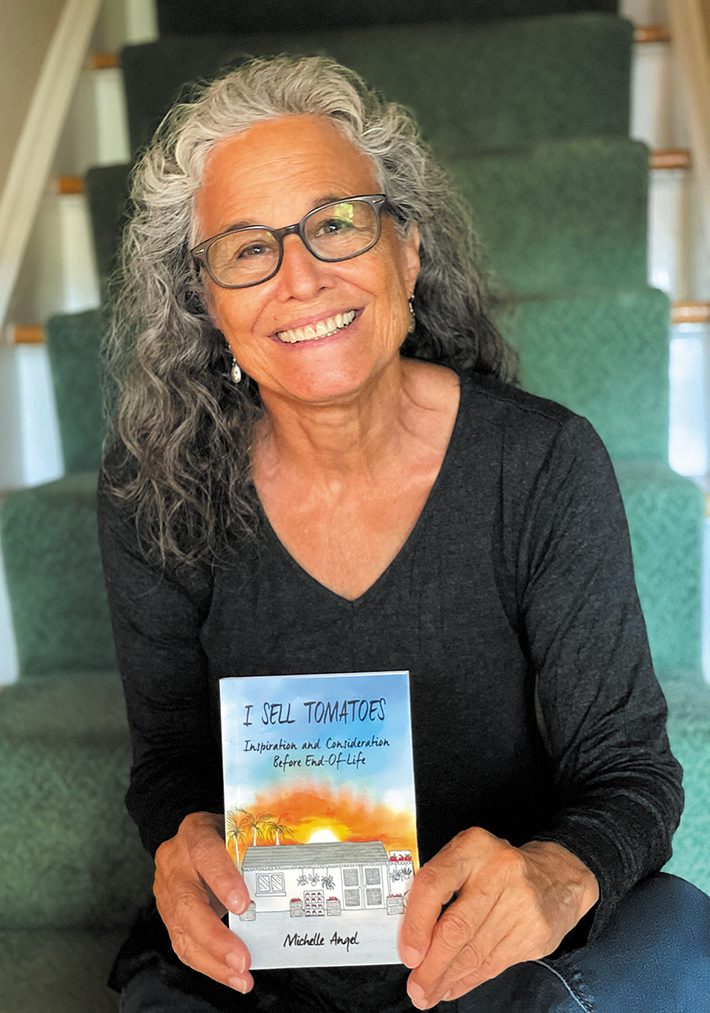 Michelle Angel, former owner of the Woolbright Farmers Market, says one goal of her new book is to make people less afraid of death. Photo provided

Intrigued by the concept of death since she was 5, Michelle Angel, who ran the Woolbright Farmers Market in Boynton Beach for 20 years, found her life’s mission as a guide and consultant for dying people and their loved ones.
Angel’s book, I Sell Tomatoes: Inspiration and Consideration Before End-Of-Life, published by Trimark Press in Deerfield Beach, holds the wisdom of 30 years’ experience in dealing with the prospect of death and offers insight on how to meet the end of life.
“This is not a book about grief or after,” Angel writes. “This is a book for before. It is meant to encourage self-inquiry into the experience we’re all guaranteed one day.
“The fear of anything loses its power the minute it’s made less confrontational,” the Boynton Beach resident writes in her book. “In the end (pun intended), the best deaths are the ones met fearlessly. I know this to be true. I invite the reader to be prepared and find out for themselves.”
Her goal is to help people have a “good death,” be less afraid and to provide them with tools to contemplate end of life. She asks the reader: “Which is more like death? A sunrise or sunset?” “What would you choose for a last meal?” And to think of a film with a “great” dying scene, such as Harold and Maude or Titanic.
Her childhood friend Suzanne Alfandari, a marriage and family therapist in San Rafael, California, helped her edit the book down to about half of its original 300 pages.
“In our culture, the subject of death is taboo,” says Alfandari. “Michelle offers a way to think about the subject and how to approach it.”
Alfandari said she didn’t think about death often, but now enjoys thinking and talking about it.
“When we realize we will all die, we can make the most of our lives,” she says. “Like a sunny day after the rain, it’s good to have the contrast to appreciate what is.”
For Angel, 68, the farm stand was across from a cemetery but was the “exact opposite” of death — vibrant, lively, filled with flowers and fresh vegetables. It closed in May 2021 with her son, Jesse Goldfinger, as a co-owner.
“It was by the grace of God that I ended up in the farm stand,” says Angel. “It gave me the opportunity to pick and choose when I do death work. It was the best of all worlds.”
In fact, if customers would inquire, “Do you do death work?,” she would reply, “No, I sell tomatoes,” giving her the title for the book.
Angel says she was 5 when she witnessed “someone that was dead being brought back to life. I believe that was the beginning of my interest.”
Other experiences followed, none frightening but all that made her think. She sat at the bedsides of her father when he died and of her brother as he died of AIDS in 1994.
She holds a bachelor’s degree in human services with a concentration in thanatology, the scientific study of death.
For Angel, a New Yorker by birth and grandmother of four, “It’s all about service.”
“I pray for each person,” she says. “I don’t take it lightly and am grateful that I get to help someone meet death fearlessly and leave nothing left unsaid.
“It’s grounding and fulfilling to be with someone who’s dying,” she says. “I’m honored and grateful when I get to be by a bedside; it’s amazing grace.”
Davida Schoentag, 70, a retired sex, mental health and substance abuse counselor from Lake Worth, met Angel when her mother was in hospice care 10 years ago.
“I’m so grateful for Michelle,” says Schoentag, who considers herself a “recovering Catholic” and says there’s no dogma or religion in Angel’s teachings. “She gave me a gift in my darkest hours and has touched many lives.
“She showed me how to be part of my mother’s transition. I was there when she took her last breath. It was a wonderful experience and not sad. I was able to share something with my mom that no one else shared.”
Angel’s support and view of death through a different lens allowed Schoentag to see transitioning to another stage as a beautiful process.
“It’s all about living well while dying, to be present in real time,” Angel says. “Being aware of where we’re going, to create a foundation of great strength, built on faith instead of fear, on what you know instead of what you don’t know.
“This will allow you to move forward more able to handle whatever comes your way.”
Angel credits her notion of “perfect plan” — that all is as it should be — with giving meaning to life as it is lived.
“We come with a birth date and a death date and everything in between is our destiny,” she writes.
“I have made friends with death,” Angel says, “but I will always be in the business of life.”