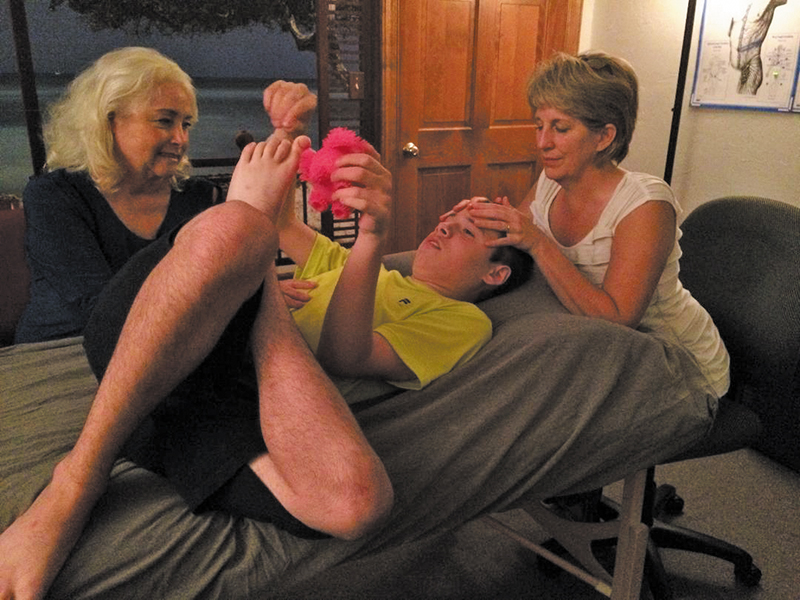 In her serene, sun-splashed patch of paradise in the Ocean Ridge Yacht Club, Gayle “Mya” Breman found both roots and wings.

When she first arrived at the townhouse in the late 1980s, she was working in radio and TV but yearning for a more meaningful career. Little did she know that the path to her life’s work was waiting just outside the front door.

“When I moved in here 32 years ago, the Merrells — Allen and Elizabeth — were the first people in this complex,” says Breman, best known to family and friends as Mya. “They’re the people who funded and created and started the Upledger Institute.

“My background was working at CBS and NBC for years. So, they needed a marketing director. And they kept at me and kept at me, because we really became best friends. And finally, I went and met Dr. John and I was the marketing director for four and a half years.”

Dr. John Edwin Upledger, a doctor of osteopathy and professor of biomechanics at the College of Osteopathic Medicine at Michigan State University, co-founded what is now the Upledger Institute International in Palm Beach Gardens in 1985. Upledger, who died in 2012, is best known for developing craniosacral therapy, a gentle form of bodywork intended to release tension and relieve pain and dysfunction.

“Using a gentle, noninvasive touch generally no greater than 5 grams—about the weight of a nickel—practitioners release restrictions in the soft tissues that surround the central nervous system,” the institute explains. Clients receive CST treatments for conditions that include migraines, neck and back pain, TMJ, chronic fatigue, scoliosis and central nervous system disorders. Sessions last from 45 minutes to an hour, during which clients remain fully clothed. While she was marketing director, Breman trained in CST and became certified in therapeutic massage and bodywork so she could offer demonstrations at conventions and meetings. After a satisfying stint in the role, Breman had another job opportunity and told Upledger she would be leaving.

He had other ideas, pointing her toward the second floor, encouraging her to immerse herself in the institute’s intensive program.

“You don’t say no to Dr. John,” she says, smiling broadly. “And you know, he just changed my life.”

With Upledger as her mentor, she earned a master’s degree in social work and became a licensed clinical social worker. She’s a diplomate in CST, the top level of certification available.

She’s traveled the world — from Pennsylvania’s Amish country to Australia — practicing and teaching noninvasive body therapies. She developed her own signature practice called “body psychology,” blending her singular combination of skills to address psychological and physical pain. She’s studying for a Ph.D. And now, she is a freshly minted author.

She and Susan Vaughan Kratz are co-authors of A Touch Better: Two Therapists’ Journeys and the Lessons They Learned From Dr. John E. Upledger About CranioSacral Therapy.

“It took about five years to really get this thing done,” Breman says of the 253-page book. “My passion was to keep Dr. John Upledger alive … his legacy, his passion, his teachings and the things we did there.”

“I think I represent the next generation of therapists learning the work from the sages,” says Kratz, a CST diplomate and occupational therapist with a clinic in Waukesha, Wisconsin. “After practicing this method for 20 years now, I’m as passionate about it and the results it promises as I was when I first learned craniosacral therapy. Together, Mya and I wanted to assemble parts of the story of Dr. Upledger’s work that had not been told, and yet include compelling scientific evidence that is demanded of practitioners in this day and age.”

The authors devote the book’s last chapter to scientific research into CST. One example is a study published in the May 2016 edition of The Clinical Journal of Pain, which concluded: “CST was shown to be specifically effective and safe in reducing neck pain intensity and may improve the functional disability and the quality of life up to three months after the intervention.”

The practice attracts its share of skeptics, but Kratz and Breman welcome the scrutiny. “Scientific research increases the exposure and acceptance of this very valuable treatment,” they write. “In order to reduce the ‘voodoo’ perception of therapeutic touch and mobilizing tissues and fluids, we need to validate the work.”

CST adherents need no further convincing. Louise, a 50-year-old Palm Beach resident, says she found relief in CST after a car accident left her feeling like she had “shaken baby syndrome.”

“The major benefits included reduction of pain and greater mobility. It is amazing what a good craniosacral therapist can do in a very gentle noninvasive way,” says Louise, who prefers to remain anonymous. “I have continued with my craniosacral therapist. What I have learned is, when injuries and issues are addressed quickly, they tend to be resolved quickly.”

Sitting in her airy Ocean Ridge living room, a stone’s throw from where neighbors pointed her in surprising new directions, Breman talks about the work she’s done with children on the autism spectrum, a young man with schizophrenia, a client with Alzheimer’s. “It’s my joy to help them,” she says of the work — which is, after all, her “soul purpose.”

A Touch Better is available on the International Alliance of Healthcare Educators website, www.iahe.com, for $26.95. To learn more about the Upledger Institute International or CST, visit www.upledger.com.