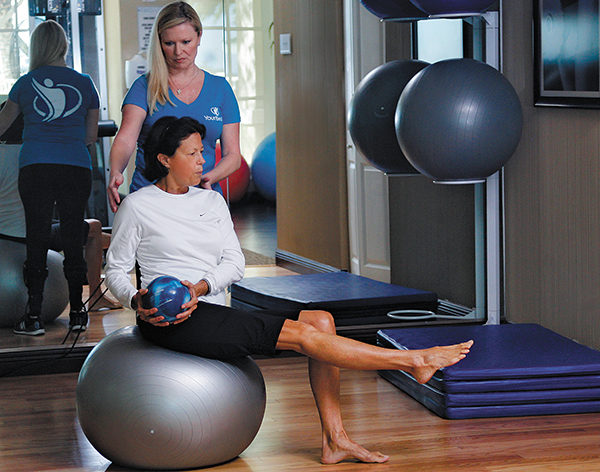 in Boynton Beach. King walks with the aid of high-tech braces on her calves.

As Christine King sits on the breezy pool deck at her condo on the Intracoastal Waterway, she hears a noise that no one else even notices.
“Jet Ski,” she says. “I had never heard of a Jet Ski accident until I was in one.”
It was July 4, 1996. King, then 26, was a passenger on a Jet Ski in the Atlantic Ocean off Rhode Island. The Jet Ski hit a wave way too hard. She and the driver went up in the air.
“I thought, when are we coming down? Then I blacked out.”
She was told later that she came down, hard, on the seat. The impact broke her back.
“When I woke up I looked down at my legs and they were twisted more than they can be twisted.” She wraps her forearms around each other to suggest what her legs looked like.

“I said to myself, if I ever get out, I will change my career,” said King, who at the time was vice president of a video company.
Despite the odds against it, after months of surgery and rehabilitation King regained the ability to walk.
She already had been a ballerina and had been training for the Miss Fitness USA title at the time of her accident. She got training as a medical exercise specialist and started a company called Your Best Fit, working with clients of all ages and levels of ability. From her base in Boynton Beach, she and her staff of 15 trainers, nutritionists and other specialists work with doctors and clients all over the country.
Having worked her way back to mobility from such an injury, King is a past master of working around the excuses of others.
“I tell people they can do what they never thought possible,” King said with the fervor of someone who knows. “If it moves, we exercise it, and if you can move, you’d better move.”
Peg Ekberg is in full agreement.
“If you can move, you can do something,” says Ekberg, who is 94 and shooting for age 120. “She says that, and I say that.”
Ekberg works with King in the pool once a week to combat arthritis, neck and back problems.
King also worked with Ekberg’s late husband, Paul, who had Parkinson’s disease.
In the swimming pool, King was able to help Paul Ekberg and others — some with oxygen tanks — to work muscles more easily than on land.
When the time came for the Ekbergs’ granddaughter to marry at Bethesda-by-the-Sea in Palm Beach, Paul Ekberg’s dearest wish was to walk down the aisle to his seat in the church.
“Twenty-six steps was all we needed,” recalled Peg Ekberg.
For weeks before the wedding, with King coaching, the couple practiced, step by tentative step, in their condo.
And he did it.
“There were tears in the eyes of all the family and friends,” said Peg Ekberg. “How grateful we were to her.”
When King was recovering from her accident, doctors told her that her progress was aided by the fact that she was very fit. She also credits her nurses, who refused to baby her.
“They said you have to do some things by yourself,” she recalled. “It gave me a lot of confidence.”
That philosophy carries over to her clients now.
“I tell people, we know what you can do,” she said. “I have your numbers, your X-rays, your MRIs.”
Her clients include elite-level golfers and child athletes, as well as people recovering from surgeries and people with and without disabilities.
King follows her own daily regimen of pool exercise and back strengthening. She walks with the aid of high-tech braces on her calves.
Bob Ridgley, 81, of Delray Beach, has been attending King’s exercise classes at the Gulf Stream Bath and Tennis Club for 16 years. Another of King’s services is managing fitness programs for private clubs.
“She’s like a professor. She studies aging and she really knows what she is doing,” says Ridgley, who runs a personalized products business and plays golf after four back surgeries. “She will change [an exercise] for you alone. I have high regard for her acumen. We’re not jocks, but she gets us all inspired.”
Peg Ekberg admires King’s careful attention.
“It’s not just what she does in her classes but how she cares about people,” Ekberg said. “When Paul was in the hospital she would show up, even if it was midnight, to find out how everything was. It’s not just a job, it’s a gift she gives to everyone.”
King says she is the one receiving the gift.
“I haven’t met anyone who hasn’t been through something,” she said. “I tell them, you can fight through this and feel comfortable in your own skin. We are all heroes.”