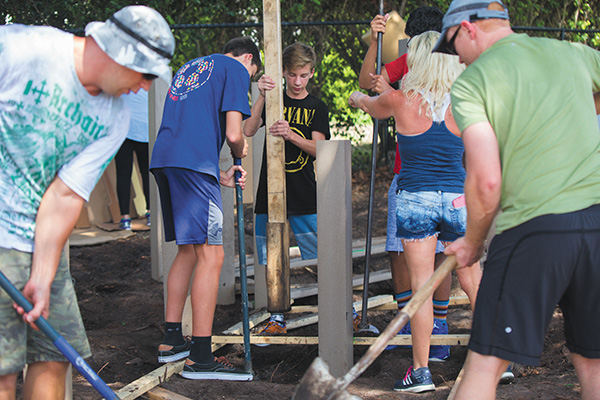 Eighth-grader Jack Liebowitz (center, in black) tamps the ground where supports for the new playground would go. at the Gulf Stream School. Knobel’s son Spencer goes to third grade at the school. 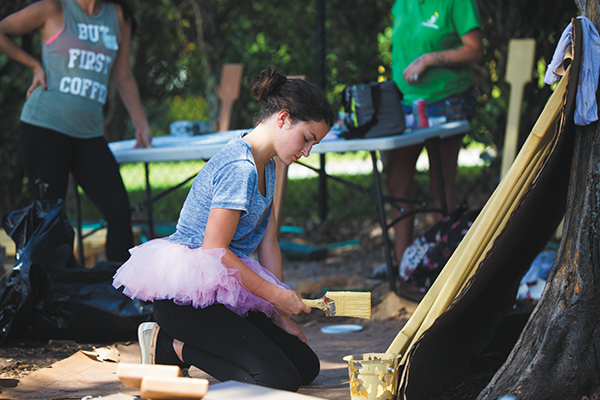 Seventh-grader Kiki Kosinski paints a piece of equipment for the playground. 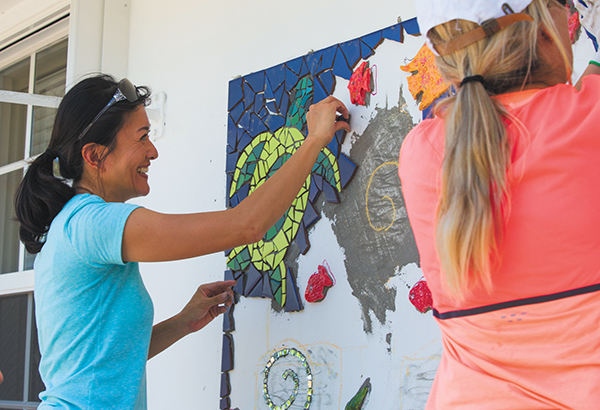 Cynthia Rivenson adds to the mosaic wall mural on the new playground. Her children Ethan and Ava attend the school.

Photos by Taylor Jones and


Gulf Stream School students, parents and teachers
team up to rebuild their playground

Shortly after 5 p.m. on Oct. 21, Norma Dagher stood at the bow of a pirate ship, smiling down at the eager crowd of mothers and fathers, sons and daughters gathered below.
“We did it!” she called, and cheers rose from the grounds of the Gulf Stream School.
“This is a beautiful symbol of love for our kids, and future families will hear the story of how it was built.”
The pirate ship, the treehouse, the surf shack, the slides, the swings and the monkey bars —their story began in April 2015, when the money raised at that year’s auction was dedicated to replacing the school’s aging playground. Students break through a paper chain to get to the playground during the dedication.

Dagher and her colleagues on the playground committee, Chiara Clark, Stephanie Kahlert and Debra Ghostine, got in touch with Leathers & Associates, a Jupiter design firm that brings its clients into the process by overseeing volunteers during their playgrounds’ creation, from the first renderings to the last nail.
In October 2015, all the school’s students drew pictures of what they wanted their new playground to look like.
In January 2016, the drawings were placed on display and a bingo night held for parents and teachers to admire, marvel and occasionally frown at the students’ expansive visions.
Then representatives from the design firm visited every class to review the suggestions and create a workable rendering.
Alas, what some of the children envisioned did not always prove viable.
“I wanted a zip line all the way from the tree to the beach,” said Alicia Grillo, 9, a third-grader from Gulf Stream. “And a trampoline.”
She was not alone. The zip line was a popular idea, but safety concerns and state laws prevailed. The prospect of third-graders dangling on a wire over South Ocean Boulevard did not make the cut.
“We wanted a treehouse in the big tree,” recalled Julie Moquin, 13, an eighth-grader. “We got it, but it’s on the ground. I guess it was probably too dangerous.”
Eighth-grader Jack Liebowitz, 14, wanted a rocket ship. He got a pirate ship.
“But any type of ship is cool,” he decided. “Anything to climb around on.”
Together the children, the parents, the teachers and the design firm made a plan. Their playground would have a seascape theme, born of the school’s proximity to the ocean and its mascot, a stingray. It would have a pirate ship with a slide at the stern, a treehouse lacking only a tree, swings for both the pre-K and upper-school students, a surf shack for the youngest students and accommodations for students with disabilities.
And so, on Oct. 11, they set to work, guided by design firm President Marc Leathers. Teachers and parents, students, alumni and members of the board of trustees showed up in work clothes, broke a sweat and began building a playground.
“I helped make the wall,” said Max Martin, a second-grader from Delray Beach. “I’m only 8 and you had to be 10 to build.”
Facing the swings from the side of the school’s pre-K and kindergarten buildings, the wall is a large, colorful mosaic of underwater beauty, with ceramic seahorses, crabs and stingrays swimming in a bright blue sea, all cookie-cuttered, baked and cemented by the 3- to 5-year-olds.
Squatting before the wall, Sally Zaluski polished the tiles while not far away her husband, Joe Zaluski, the head of school, dug holes, cut roots and helped install the surf shack.
“It’s a delightful opportunity to get out of my office and get my hands dirty,” Joe Zaluski said. “Nothing compares to a community effort, and this entire project is about the children.”
And that is how the Zaluskis spent Oct. 13, their 37th wedding anniversary.
Gena Gustin’s daughter, Olivia, is a pre-K student.
“I’ve been volunteering since 12:30 yesterday afternoon and I still have all my fingers and toes,” the Boynton Beach mother said with a mix of pride and mild astonishment. “But the children are learning that things don’t magically appear. It takes an effort, and my daughter will see that Mom helped build what’s she playing on.”
Devon Coughlan, a 1982 graduate and president of the board of trustees, was out there, along with new parents like Brian Cavanaugh, whose daughter Ciara just entered the seventh grade after a recent move from New Jersey.
By Oct. 16, a huge pile of mulch had appeared in the school’s parking lot, and by Oct. 21 it was scattered around the playground, which was now ready to open.
The final touch came about 1 a.m. on the 21st, when the donor wall was completed, a rectangle of 216 tiles adorned with the handprints of 99 students in the shape of a heart.
“Helping Hands, Helping Hearts,” it reads. “Together We Are One Playground.”
That afternoon, those students and their parents gathered to hear Norma Dagher stand atop the 17-foot- tall pirate ship and declare the playground open.
“We did it,” she reminded them. “And now … let’s play!” Even the teeter-totter has a waiting line during the dedication celebration.

A paper chain blocking the gate was cut and dozens of children rushed through to scramble up the treehouse, slide down the pirate ship, dangle from the monkey bars, swing the swings and make real the playground they had once only imagined.